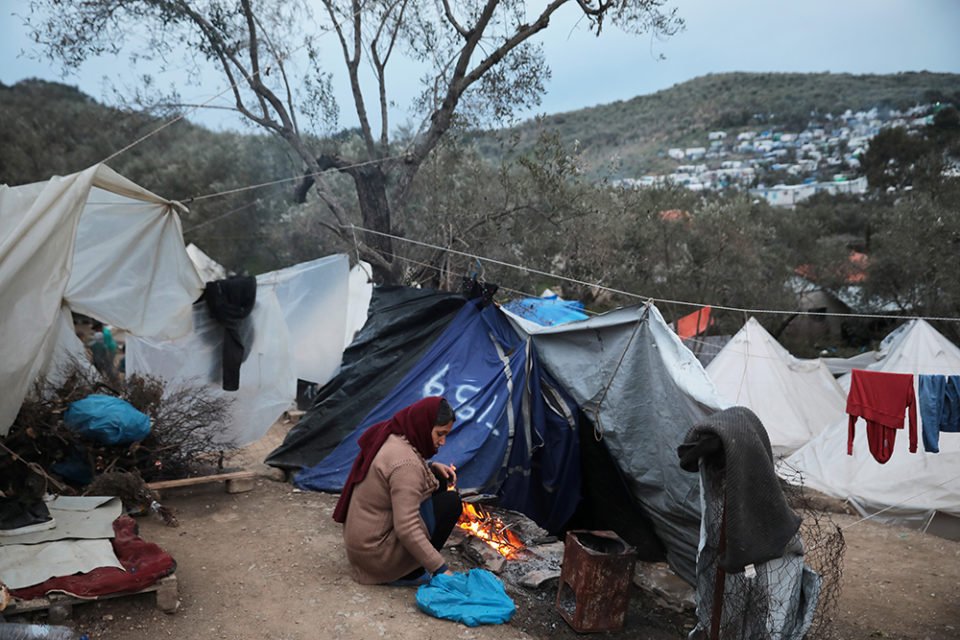 A woman lights up a fire at a makeshift camp for refugees and migrants next to the Moria camp, on the island of Lesbos, Greece, March 7, 2020. REUTERS/Costas Baltas

At a time when more refugees are pouring into Greece, fourth year medical student Alexia Christodoulou reflects on her time volunteering at the Moria camp in Lesbos

Volunteering in a health centre in Lesbos was a rather spontaneous decision. My home town of Thessaloniki had been flooded with refugees seeking shelter in every corner, each one providing a reminder of the migrant crisis.

Before entering the Moria camp for the first time this winter, I was warned it could be overwhelming. As we reached the front gate, I saw kids running over sewerage beside towers of garbage wearing only worn out flip-flops. I looked down at my own feet, clad in sensible boots, and instantly felt grateful.

The small clinic is based within the heart of Moria camp. A tiny room that served as office, storage room and pharmacy was housed in the same place as a maximum of six to seven examination rooms, some of which were outdoors and had been created by former volunteers. Although it has limited resources, Syrian co-ordinator Abdul Hadi along with medical and non-medical volunteers, works tirelessly and manages to run the clinic like a well-oiled machine.

With arrivals this winter increasing by 88 per cent compared to 2018, the camp’s population at the time I was there was close to 21,000, with most arriving from Afghanistan, Syria, Iran, Iraq, Democratic Republic of Congo and other violence-afflicted countries. The barbed wire fences that once surrounded the main camp have been torn down and people have spread all over the nearby olive groves and mountains. Enduring poor sanitation, ice-cold water and mud covering their bodies, they struggle to craft their ‘homes’ in hope of avoiding the rain, wind and cold. The less fortunate live in the so called ‘Jungle’. The name does justice to the situation. There aren’t any toilets or showers, nor a decent place to sleep – an utterly repulsive image for the 21st century.

Persecution, conflict and violence in various countries around the world have forcibly displaced millions. In a moment of terror and desperation, the threat to survival summons a fight or flight response. And the stories are true. I’ve heard them myself. Minors threatened at gunpoint. Murdered parents. Cities turned into warzones in days. Boys forced to kill. Men, women, children, elderly crossing borders and paying smugglers for boat tickets that promise nothing but hope.

While I was there through an NGO (Aegean Boat Report) we learn about those who don’t make it to the shore. Some go missing, some are found drowned and others get arrested by the Turkish Coast Guard or the Turkish Police.

In the mornings, I watched the new arrivals stepping off the bus and into the camp. They are now trapped on this island. Their problems aren’t over… and won’t be for a long time. They have escaped from one hell only to land in another. Soon they will find out for themselves.

Between triage, organising drug supplies, preparing prescriptions and helping in wound care, I consulted patients alongside some exceptional physicians. Among the common problems of diarrhoea, skin and respiratory infections, what struck me were the cases of mental disorders such as depression, PTSD, anxiety and trauma.

The cases of patients with suicidal thoughts inflicting self-harm can’t be counted. Among them are unaccompanied minors, who reached 42 per cent of the camp’s population. Among the chaos individual stories stand out…

He is 21 years old. He arrived with a knife laceration on his neck. We ask how it happened and he turned his head away. “He has been living in the Jungle alone, with no family left,” the interpreter said.

She is 19 years old. She took an unknown quantity of pills desperate to end her life. I turned and looked at her. Eyes wide, pointing to the right corner of the room behind David’s chair (a GP from Arizona). Hands tied together resting on her legs. She seemed empty and desperate. Frightened by the thought, I immediately look away.

Our shift was started at 9am and went on until 4pm. We struggled to maintain a fast pace as residents would wait in line to see us for hours.

She is 16-years-old. She comes with her 23-year-old husband. She was six months pregnant and after having suffered a previous miscarriage was suffering from abdominal pain and vaginal bleeding. She said she couldn’t feel the baby moving. Her blood pressure was good although she was in pain and looked pale. We acted fast, palpated her abdomen and ran an ultrasound on the bump searching for the fetus’ heartbeat. And there it was! A strong, rhythmic heartbeat. I took her hand, “You don’t need to worry… your baby’s alive”. She burst into tears. Translation was unnecessary, our expressions said it all. We sent her to the hospital for what seemed like a premature delivery. I informed Abdul Hadi and the ambulance was on its way.

He is a 35-year-old African male. “He’s been dreaming of his dead little brother and the night they were being chased in the jungle, back in Africa,” the French interpreter said. The late-night fights and noises in the camp scare him. Nightmares haunt him. Awakened by his own screaming, he finds himself hallucinating in the middle of the night. He presented to us anxious, clearly disoriented and panicked, his eyes red and swollen. Clearly, he hadn’t slept in days. “What can we do for you today?” I asked. He said he would like a pill to go to sleep or something to help him relax. I looked at David. Same look on our faces. We both knew we were about to disappoint him, among hundreds of others who were battling with mental health problems. According to a regulation of the Greek government we were unable to prescribe medications for mental health problems. We gave him some paracetamol for the headaches and off he went back to his own personal hell.

Every Saturday a paediatric shift took place. First thing in the morning we would all gather for a meeting. In one of these meetings Abdul Hadi had announced the date and the latest measures about to be implemented by the Greek government following their announced plan to deport 10,000 refugees by the end of 2020. A few moments of complete silence followed his announcement. “I’ll probably be one of them,” a refugee interpreter said in a rather humorous way. His tone was surreal. Frozen by his reaction, we all remained silent.

Between fevers and coughs, wheezing respiratory sounds and diarrhoea, kids also suffered from severe rashes. Spread all over their bodies, grey scaly lines formed the diagnostic burrows of scabies. No treatment protocol could be delivered under the level of unsanitary conditions in the camp. Instead of washing machines families were advised to seal their clothes in plastic bags for five to seven days. But they didn’t have a second set of clothes. Disturbed by the thought, we felt powerless.

Every day was the same. Hundreds of cases and conditions that never seemed to get any better. By the end of the year I started recognising patients! Another sign that things were getting worse.

At least I was able to leave. I did so possessed by a sense of uncertainty and rage. And although no silver lining has yet appeared to offer a remedy for this inhumane suffering, I feel obligated to encourage all people to contribute to the cause and help to alleviate those suffering in the camp.

Donations can be made at http://www.kitrinoshealthcare.org

This article first appeared in The National Herald

Atalanta’s game in Valencia to be played in empty stadium