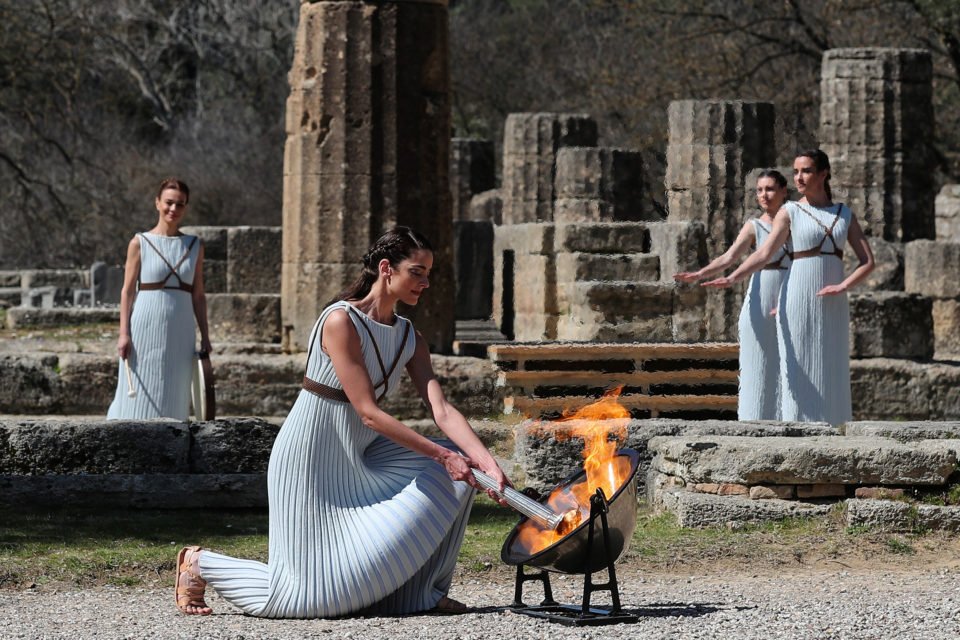 The flame for the Tokyo Olympics has been lit at the birthplace of the ancient games in a pared-down ceremony because of the coronavirus.

Standing in front of the ruined Temple of Hera in Ancient Olympia, a Greek actress playing the part of a pagan priestess used a concave mirror to focus the sun’s rays on a silver torch, causing fire to spurt forth.

International Olympic Committee (IOC) president Thomas Bach noted the “difficult circumstances” created by the virus outbreak, but stressed the IOC’s commitment to the success of the Tokyo Games.

“Nineteen weeks before the opening ceremony, we are strengthened in this commitment by the many authorities and sports organisations around the world which are taking so many significant measures to contain the spread of the coronavirus,” Mr Bach said.

The IOC has stressed that the July 24-August 9 Games will go ahead as planned – even as sports events in various countries are being curtailed or held without spectators – and urged all athletes to continue to prepare for the Olympics.

Addressing an unusually small crowd of officials in Ancient Olympia because of virus control measures, Bach extolled Tokyo organisers’ “excellent” preparations for the 2020 Games, as well as their “incredible efficiency, effectiveness and enthusiasm”.

“We are grateful to the Japanese people who are embracing these Games with such enthusiasm,” Bach said.

“Our Japanese friends are interpreting the noble mission of the Olympic Games in an outstanding way.”

After a week-long relay through Greece, the flame will be delivered to Tokyo organising officials on March 19 at a ceremony in the rebuilt ancient stadium in Athens where the first modern Olympics were held in 1896.

The ceremonial part of Thursday’s flame-lighting was held with customary mock-archaic splendour: Young men and women dressed in pleated robes, a prayer to Apollo – the ancient Greek god of light – and dancing to flutes and drums under a splendid blue sky as blackbirds sang.

But fears of the coronavirus forced Greek officials to ban members of the public from attending the ceremony and severely curtail the number of invited officials and journalists.

Normally, several thousand people from many countries gather on the earthen banks of Olympia’s ancient stadium to watch the ceremony.

She passed the flame to another woman, Mizuki Noguchi of Japan, who won the marathon at the 2004 Athens Games.

Among the torchbearers at Ancient Olympia was European Union commissioner for migration Margaritis Schinas, a Greek.

Other runners on the Greek leg include Olympic champions Tadahiro Nomura and Saori Yoshida of Japan.

In Japan, the torch relay will start on March 26 from the Fukushima province that was ravaged in the deadly 2011 earthquake and tsunami, travelling for 121 days before reaching Tokyo for the opening ceremony on July 24.

The ancient games started in 776 BC and were held in Olympia for more than 1,000 years until they were stopped in early Christian times because of their pagan past.

Coronavirus to have substantial impact on state finances, Petrides says