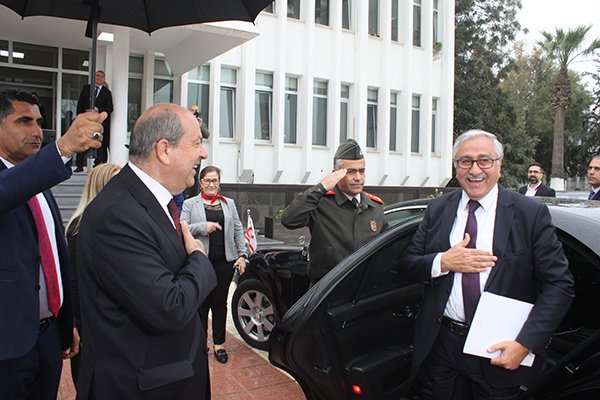 Turkish Cypriot leader Mustafa Akinci on Thursday expressed his opposition to the ‘cabinet’ decision in the north to temporarily close two crossings, those at Limnitis and Strovilia as part of measures to prevent the spread of the coronavirus.

The move came as authorities in the north announced their second confirmed case, the husband of the German tourist found positive earlier in the week.

It was also announced after the ‘cabinet’ meeting that citizens and travellers from 22 countries would be barred entry to the north from midnight Thursday until April 1.

The two crossings will close until March 22 when the measure will be reassessed. The crossings at Ayios Dhometios, Ledra Palace and Pergamos will remain open.

The Turkish Cypriots also announced that schools including universities would remain closed until March 22.

Akinci presided over an extraordinary ‘cabinet’ meeting to discuss further measures against the spread of coronavirus but left before it ended.

‘Deputy prime-minister’ Kudret Ozersay who exited the meeting to announce the measures, said that they were not declaring a state of emergency but that the measures were aimed at reducing the risk of the virus spreading. He later said that the Limnitis crossing point would remain open for ambulances as well as regular supply convoys to Kokkina in line with earlier agreements. The meeting was convened after the confirmed Covid-19 cases rose to seven in the government-controlled areas and two in the north.

Akinci announced later on that he learned about the decision for the closing of these crossings after he left the meeting.

He added that he had stressed at the meeting, the necessity of increasing the controls at the crossing points but there was no decision for their closure.

One of the main issues the Turkish Cypriot side had raised after the Greek Cypriots’ decision to close four of the crossings – Ledra Street, Astromeritis, Lefka and Dherynia – was that it was a unilateral move and that the bi-communal Technical Committee on Health, which continues its work according to scientific principles, was not aware of this decision.

“The repetition by our Council of Ministers of this attitude that we have rightly criticised has not been a correct development,” Akinci said. He reiterated his position that the two communities must act together on what kind of precautions should be taken as regards the crossings on a scientific basis.

“Our fight against the threat of corona virus, which concerns all humanity, is a struggle that should be carried out outside of daily political conflicts,” Akinci said.

The other measures announced on Thursday concern an entry ban to the north to citizens and travellers by road, sea and air from Italy, Iran, Iraq, South Korea, China, France, Spain, Germany, Greece, US, Switzerland, Japan, Norway, the Netherlands, Denmark, Sweden, UK, Hong Kong, Singapore, Qatar, Bahrain and Australia. According to reports, persons who have obtained permit from the ‘migration department’ will be able to travel to the north while those who are already there will have to self-isolate for 14 days.

Turkish Cypriot travelling to those countries will have to self-isolate for 14 days after their return. Ozersay said that there will be measures against those failing to observe this instruction.

These measures will be in place until April 1.

The process of obtaining new work permit for foreign nationals was stopped until March 22.

School activities have been postponed until April 3, as well as all sports events, meetings at cinemas, theatres and areas were gatherings take place including concerts in casinos, until March 22.

Ozersay also they would make announcements at a later stage as regards gatherings at worship areas.

Respiration masks, gloves and disinfectants have been declared as controlled products and everyone caught selling them expensively will be punished.

On Tuesday, Turkish Cypriot authorities announced that they would not allow the entry to the north of groups from the south of over 10 people. Schools in the north will be closed throughout the week.

On Wednesday it was announced that all chartered flights from all countries would be stopped until April 1. Turkish Cypriots arriving from abroad have been asked to contact authorities for instructions on what to do.

According to Yeni Duzen, on his way into the meeting, Akinci came across ‘prime minister’ Ersin Tatar. Observing instructions over preventing the spread of the coronavirus, the two men did not shake hands, but touched their own chests in greeting.

Cases on the rise, blow to UK arrivals (Wrap up)