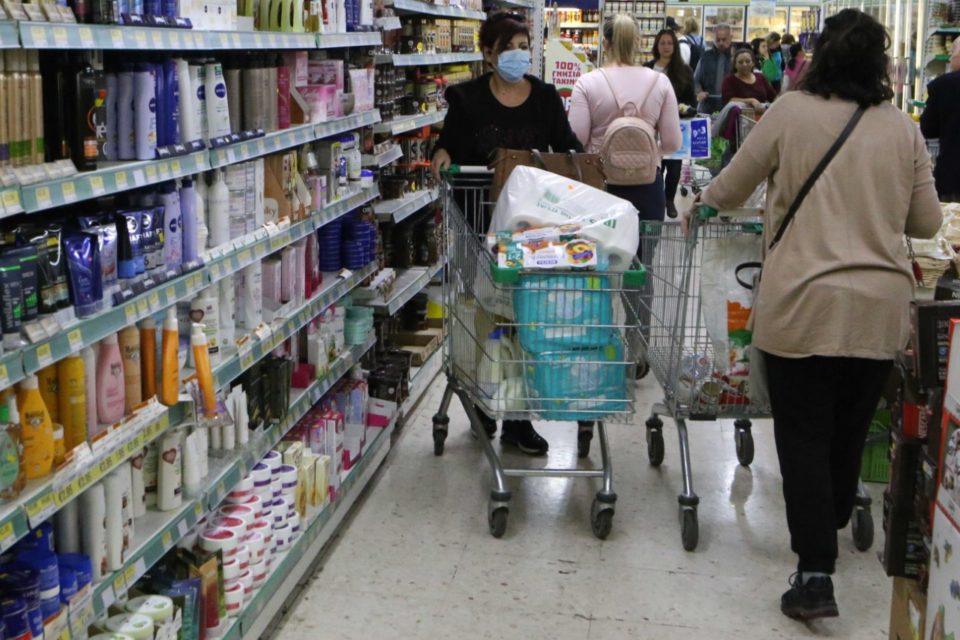 In the wake of the move by the government to close schools until March 20, supermarkets in Paphos saw shoppers flock to stores on Thursday to stock up.

“I will have to stay at home with my children for the next few days and the logistics of trying to get to the shops to buy provisions will be difficult,” a Paphos father of three told the Cyprus Mail on Thursday.

Another parent, who was pushing two shopping trolleys stocked high with all sorts of goods, said she wants to limit the time spent out of the house, as she is concerned about contracting Covid-19 and passing it onto her elderly mother and children.

“I know there are guidelines to follow, which I am, but no-one can guarantee that we won’t see the virus get out of control here in Cyprus can they. I am very concerned so I am doing a big shop now.”

Many shoppers were spotted in a central supermarket in Paphos on Thursday, wearing face masks and latex gloves, and queues at checkouts were substantial.

Some shelves selling pasta and other dried good stood empty, and in other areas of the shop, staff were re-stocking shelves.

“I know that shops and malls are exempt from the government ban on more than 75 people gathering in one area, but it makes no sense as there are many more people here now and everyone is standing quite next to each other,” another shopper commented.

Looking to allay fears on Wednesday, the head of the Cyprus supermarket association, Andreas Hadjiadamou, said that people are panicking unnecessary. He confirmed that more people than usual were visiting supermarkets so far this week but no shortages appear to be occurring yet.

According to reports, a Paphos taxi driver is among one of the four new confirmed cases. The 60-year-old driver is thought to have attended Paphos hospital personally due to his symptoms and had not travelled abroad.

In the meantime, the municipality of Paphos announced that due to the measures taken to limit the spread of coronavirus, the adult centers of Paphos in both Mouttalos and Kato Paphos will suspend their operations as of Friday for a week.

“After that date, the situation will be re-evaluated and new decisions will be taken as developments unfold,” they said.

In Peyia, Mayor Marinos Lambrou called a council meeting for Friday evening and plans to close the municipality offices to the public visitors for one week, although staff will still be working.