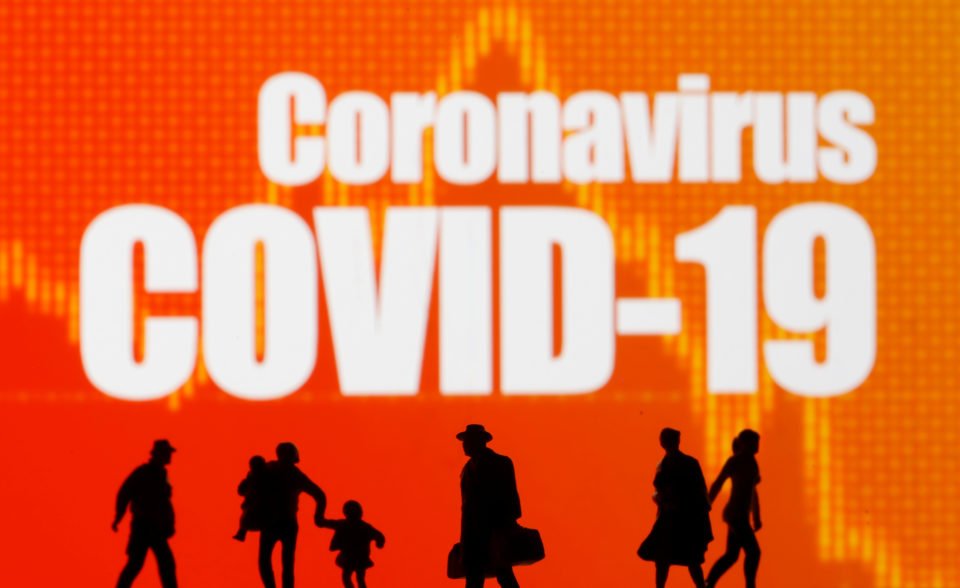 More than 134,500 people have been infected globally and over 4,900 have died, according to a Reuters tally of government announcements.

Scotland has had its first death of a patient with coronavirus, an elderly patient with underlying health conditions, Scotland’s chief medical officer said on Friday.

“The patient, who was being treated by Lothian Health Board was an older person who had underlying health conditions,” Catherine Calderwood, chief medical officer for Scotland, said in a statement.

Canada on Friday moved to suspend the House of Commons, delay the presentation of a new budget, and advised against non-essential foreign travel in an effort to slow the spread of the new coronavirus, senior officials said on Friday.

“We seem to be approaching a different phase right now” with the spread of the virus, said Prime Minister Justin Trudeau, who is in self-isolation after his wife tested positive for coronavirus.

US President Donald Trump on Friday will declare a national emergency over the fast-spreading coronavirus, opening the door to providing more federal aid to fight the disease under the Stafford Act, according to a source familiar with the declaration.

17:50 British Airways in battle for ‘survival’ over coronavirus

British Airways warned that its survival was at stake on Friday as its CEO told staff of plans to cut jobs and ground aircraft to tackle the “worsening situation” caused by coronavirus.

Chief Executive Alex Cruz told BA’s staff in a message titled “the survival of British Airways” that coronavirus was causing a crisis “of global proportions like no other we have known”, more serious than the financial crisis, SARS or 9/11.

German flagship carrier Lufthansa said on Friday it is planning to request state aid from several European governments to weather the fallout from the coronavirus outbreak.

The airline group, which also owns Swiss International, Austrian Airlines and Brussels Airlines, was speaking to governments of countries where its units are based, it said.

15:45 Greece shuts all museums and ruins, including Acropolis

Greece will close all its museums and archaelogical sites, including the entire Acropolis that looms over Athens, until the end of the month due to the impact of the coronavirus, its culture ministry said on Friday.

Greece, with 117 confirmed cases and one fatality by late Thursday, has also cancelled public gatherings and shut down schools, theatres, cinemas and gyms.

Spain’s government will declare a state of emergency over the coronavirus outbreak on Friday, a source with knowledge of the decision said, allowing authorities to confine infected people and ration goods.

The steps would represent a dramatic increase in Spain’s response to the rapidly-spreading virus.

A cardinal on Friday modified his order to close Rome’s churches to help contain the spread of coronavirus after Pope Francis cautioned against “drastic measures” and Catholics took to social media to complain.

Cardinal Angelo De Donatis issued a new decree less than a day after his initial order. Many churches in the Italian capital will now remain open.

Some Catholics accused the cardinal of caving in to the government after his initial decree on Thursday night. Andrea Fauro said on social media the move had put “Christ in quarantine”.

All restaurants, bars and shops in Madrid will need to close over the coronavirus epidemic, with only supermarkets and pharmacies allowed to remain open, Spanish media said on Friday.

If the coronavirus crisis lasts another two or three months, it could force carriers to collapse and spark more consolidation in the beleaguered airline industry, the International Air Transport Association (IATA) chief told Reuters on Friday.

Alexandre de Juniac, in an interview at IATA headquarters, said revenue losses would be “probably above” $113 billion that it estimated a week ago, before the Trump administration’s announcement of US travel curbs on much of continental Europe.

The Hellenic Olympic Committee (HOC) decided to suspend the remainder of the Olympic Torch relay through the country to avoid attracting crowds because of coronavirus, it said on Friday.

The Tokyo 2020 Olympics torch relay got under way on Thursday when the flame was lit by the rays of the sun in ancient Olympia in a scaled-down ceremony overshadowed by the coronavirus pandemic.

A few hours after Portugal ordered schools to close next week due to the coronavirus outbreak, parents taking their kids to the last day of classes on Friday said they were relieved on health grounds but worried about how to make ends meet.

Czech pubs prepared to turn off the taps early on Friday for the world’s biggest beer drinkers after the government declared a 30-day state of emergency in an attempt to contain the coronavirus outbreak.

12.36 Ukraine to block entry to residents registered in separatist-held areas

Ukraine’s government at a televised meeting on Friday decided to ban citizens registered in separatist-held terroritory in the eastern Donbass region from entering government-controlled areas.

UEFA has postponed all Champions League and Europa League matches due to take place next week. “In the light of developments due to the spread of COVID-19 in Europe and related decisions made by different governments, all UEFA club competitions matches scheduled next week are postponed,” UEFA said.

European stock markets found some footing on Friday, after logging their worst day ever as fears of an economic shock from the coronavirus pandemic were deepened by the European Central Bank’s decision to hold interest rates steady.

France’s top flight Ligue 1 and Ligue 2 domestic soccer club tournaments will be suspended until further notice due to the coronavirus health crisis, the league’s organisers said on Friday.

The Bulgarian parliament voted unanimously on Friday to declare a state of emergency until April 13 to contain the spread of coronavirus after the number of confirmed cases in the country rose to 23.

Estonian government has decided to close schools and ban public gatherings until May 1 to limit the spread of the coronavirus, and said on Friday it was working on financial support to aid struggling companies in sectors such as tourism.

Slovak PM Pellegrini has announces that airports will be closed down while international bus, train transport will stop. All schools will close for 14 days. Only people with Slovakian residency will be allowed in and they will quarantined for 14 days.

Two Kazakh citizens have tested positive for coronavirus after returning from Germany, Healthcare Minister Yelzhan Birtanov said on Friday, the first cases of the disease in the Central Asian country.

German capital Berlin plans to gradually close its schools and kindergartens next week when public transport systems will be reduced to a necessary minimum, broadcaster n-tv said reported on its website on Friday.

Kenya has confirmed its first case of the new coronavirus, Minister of Health Mutahi Kagwe said on Friday.

The patient, who was diagnosed on the night of March 12, had travelled back to Kenya from the United States via London, Kagwe told a news conference.

09.38 Poland’s president calls off Russia trip due to coronavirus

Poland’s President Andrzej Duda will not travel to Russia next month due to the coronavirus, missing ceremonies marking the 10-year anniversary of a plane crash which killed Poland’s president, central bank chief and military commanders.

“This morning I woke up with a temperature and sore throat. I immediately contacted the Queensland Department of Health and was subsequently tested for COVID-19. I was advised by Queensland Health this afternoon that the test had returned positive,” he said in a statement issued by his office.

The German state of Bavaria will close all schools, kindergartens and nurseries from Monday until the start of the Easter break on April 6 due to the coronavirus epidemic, dpa news agency reported, citing state government sources.

Nepal has closed all of its Himalayan peaks including Mount Everest this climbing season because of fears of the coronavirus outbreak, a government minister said on Friday.

A second patient has been diagnosed with coronavirus in Turkey, the country’s Health Minister Fahrettin Koca said on Friday after Ankara announced a series of measures to curb the spread of the virus.

Bob Dylan’s upcoming concerts in Japan have been cancelled because of the coronavirus outbreak, the tour organiser said on Friday.

Singapore will deny from Monday entry or transit to visitors who have been in Italy, France, Spain or Germany in the last 14 days, as part of measures to control the fast-spreading coronavirus, the health ministry said on Friday.

Australia government has been advised by the country’s chief medical officer to ban mass gatherings of more than 500 people to contain the spread of the coronavirus, local media reported on Friday.

Mainland China had eight new confirmed cases of coronavirus infections on Thursday, the country’s National Health Commission said on Friday, down from 15 cases a day earlier.

That brings the total accumulated number of confirmed cases in mainland China so far to 80,813.

The latest numbers are in line with a downward trend in new cases, slightly down from the 114 recorded on Thursday.

This brings the total of cases detected in the kingdom to 62, SPA added.

American Airlines Group Inc said on Thursday a pilot based out of Dallas-Fort Worth tested positive for Covid-19.

“American’s Chief Medical Officer and leaders from our pilots’ office have been in touch with the pilot,” the company said in a statement.

Mexico’s Tecnologico de Monterrey university said on Thursday it would suspend all academic events and classes at its campuses from next week until further notice to prevent the spread of the coronavirus.

Gabon and Ghana confirmed their first cases of coronavirus on Thursday, becoming the ninth and tenth countries in sub-Saharan Africa to register positive cases.

In a statement, Gabon’s government said its case was a 27-year-old Gabonese man who had returned from France on March 8.

01.49 Brazil’s Bolsonaro asks supporters to call off demos due to coronavirus

Brazilian President Jair Bolsonaro called on his supporters in an address to the nation on Thursday to suspend rallies they had planned in the country’s main cities on Sunday due to the risk of coronavirus contagion.

The Women’s Tennis Association (WTA) said on Thursday that upcoming events in Mexico and Colombia will not be held because of international border closures and travel restrictions due to the coronavirus outbreak.

The Australian Formula One Grand Prix was cancelled on Friday because of the coronavirus outbreak only hours before the first practice session was scheduled to get underway at Albert Park.

00.39 French Ligue 1 and Ligue 2 matches this weekend to be cancelled

France’s professional football league (LFP) is poised to cancel Ligue 1 and Ligue 2 matches scheduled for this weekend because of the coronavirus outbreak, French TV channel RMC Sport reported on Thursday.

Arsenal manager Mikel Arteta has tested positive for the coronavirus, the Premier League club said on Thursday, with the first-team squad set to self-isolate as a result.

Bulgaria to declare state of emergency over coronavirus

Bulgaria plans to declare a state of emergency to curb the spread of the coronavirus, Prime Minister Boyko Borissov said on Thursday as the country’s confirmed cases rose sharply to 23.

Belgium’s government on Thursday ordered schools, cafes, restaurants and some shops to close due to the coronavirus, following decisions by France and other European countries to limit all but essential activities.

Portugal’s government ordered lateon Thursday to shut down all schools nation-wide starting on Monday to contain the coronavirus epidemic until further evaluation on April 9, Prime Minister Antonio Costa said in a televised address.

Costa Rica has ordered all university classes suspended due the risk of the spread of coronavirus, while other schools deemed to be at risk will also be closed for two weeks, officials said on Thursday.