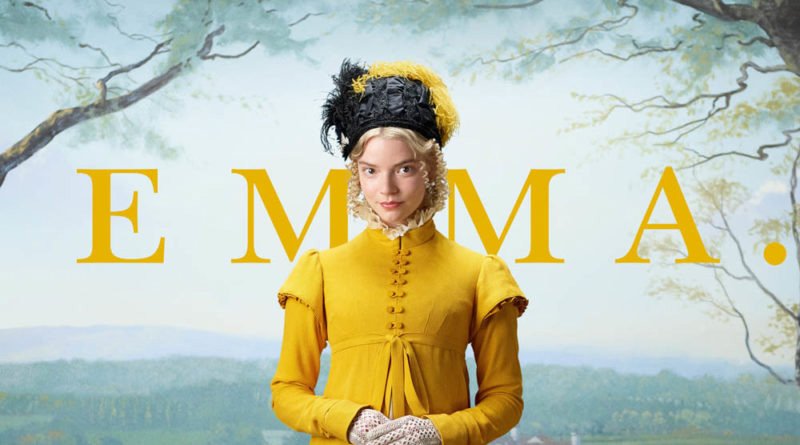 Anya Taylor-Joy is Emma Woodhouse, “handsome, clever, and rich, with a comfortable home and happy disposition” in the immortal opening lines of Jane Austen’s Emma. Taylor-Joy is a powerful actress, able to channel extreme and disturbing emotion in films like The Witch, Split and Thoroughbreds, but her role here requires her only to be very prim, very poised and very pleasant. The same may be said of the movie, a feelgood version that doesn’t lack for kindness or finer feeling – but does lack momentum, subtlety, and enough confidence in the material not to bowdlerise it with broad strokes and juvenile jokes.

Emma’s a sheltered, clever girl who likes to matchmake but isn’t always very good at it, setting up a suitor for her ward Harriet (Mia Goth) only to miss the fact that the suitor’s true feelings are for Emma herself. Her machinations have a touch of American high-school comedy, with the toffs as the popular kids and lowly farmers and tradesmen as the freaks and geeks, and indeed Emma was memorably turned into American high-school comedy in the 1995 Clueless – but the new Emma (actually Emma., with a full-stop after the title, for reasons known only to some genius in the marketing department) seems to be trying for high-school comedy while still being set in 18th-century England. Either that, or director Autumn de Wilde – a music-video whiz – isn’t too experienced with actors.

As Mr. Elton, the attractive but ultimately callow vicar, Josh O’Connor rolls his eyes and rubs his hands like Uriah Heep, a figure of fun from beginning to end. There’s broad comedy with Emma’s neurotic married sister and her weary husband, while Bill Nighy as old Mr. Woodhouse spends most of the film rearranging partitions to counter imaginary draughts. (Nighy’s a consummate pro, but even he slips into visible panto mode once or twice.) De Wilde adds a lot of new details, and about one in three are effective: Emma’s nosebleed at a critical juncture, the ladies furiously fanning themselves as Jane Fairfax plays an unexpectedly passionate piece on the piano, our heroine surreptitiously lifting up her dress to warm her bottom by the fireplace (stately homes are so chilly). But a lot of the new stuff is silly – see e.g. Mr. Elton raising his eyebrows accompanied by a little ‘ding’ on the soundtrack – and the film as a whole too shallow for a 21st-century Austen.

The rhythm is flat, for a start; the film just sits there. It needed a bit of “the felicities of rapid motion,” as someone says about dancing. (Those who think a period drama can’t – or shouldn’t – be fast-paced are directed to the new Little Women.) But there’s also the question of class, and class snobbery. Emma is against it, of course – but it’s not that simple, especially in a film about privileged people in big houses. Emma dissuades Harriet from accepting a farmer’s proposal, having convinced herself that her ward must be the daughter of a gentleman – and is chided by dashing Darcy figure Mr. Knightley (Johnny Flynn) though not for being snobbish per se, more for being insufficiently snobbish: not for thinking too little of the farmer, but for thinking too much of Harriet. Later, when she accidentally wounds Mrs. Bates with a bad joke, she’s again chided by Knightley for her tactlessness – especially because Mrs. Bates is poor, and should be pitied. But isn’t such noblesse oblige also a form of snobbery?

In the end, Emma stands for being nice, a message that’ll please good girls (and boys) of all ages while avoiding any tricky debates. Knightley’s act of kindness at the ball is a big deal here. Emma’s accidental unkindness to Mrs. Bates is also a big deal. She’s not entirely sympathetic, which is interesting – Taylor-Joy, with her natural intensity, may be better casting than Gwyneth Paltrow in the 1996 version – though the script also takes pains to protect her: the first thing we see Emma do (say goodbye to her best friend and surrogate mother) makes her look vulnerable, so all the later, potentially arrogant things we see her do don’t seem so arrogant. If you’re waiting for an Emma that really interrogates its heroine, keep waiting.

That said, the movie has a moral dimension. Characters are judged by how they behave to other characters; judgments are made (“There is a littleness about him…”). This is a decent little film, in both senses. If only it weren’t so bland, if only performances weren’t so erratic, if only the rhythm were sprightlier, if only it weren’t (apparently) trying to make Jane Austen palatable to giggly teens. Emma (and Emma) is better than that, handsome, clever and a bit of a control freak, shying away from messiness (and romance, which is also messy). May the next take on Austen be bolder, and messier.