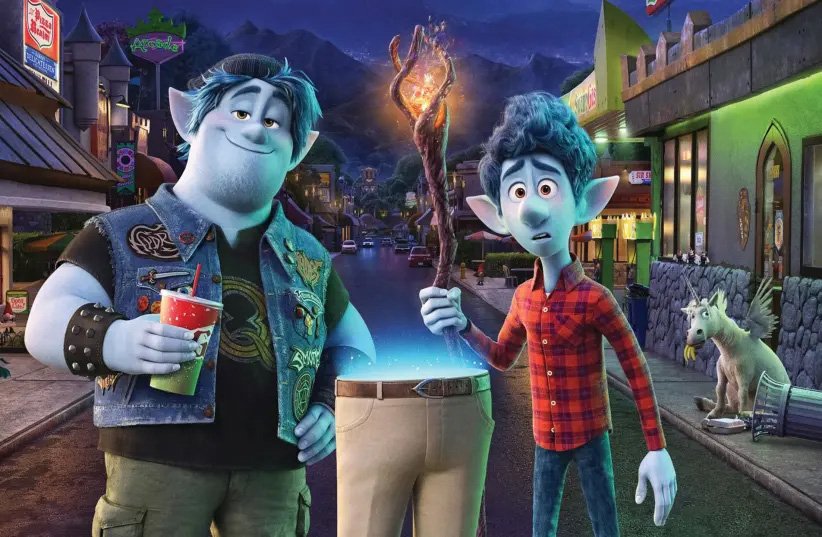 You might guess, even if you didn’t know – but it’s even more touching if you do know – that Dan Scanlon, who directed and co-wrote Onward, lost his father at an early age, leaving him alone with his mum and older brother. Later, when he and his brother were teenagers, a relative gave them a brief audio recording of their late dad – the kind of almost-but-not-quite reunion that also features in Onward, a tale of two teenage elves (it’s set in a fantasy world) who find a present from their father when the younger brother Ian turns 16: a wizard staff and a so-called ‘visitation spell’ that will bring Dad back to life, for 24 hours.

This new Pixar cartoon is an outlier in many ways. Its heroes are two boys when most cartoons these days favour girls, or at least try to keep a gender balance. It’s one of only two Pixar films since 2016 that’s not a sequel or part of a franchise (the other one was Coco, also a film that revolves around death). It’s also surprisingly simple, a straight-ahead quest movie with a race against time and a clear objective. Ian Lightfoot (voice of Tom Holland) and his older brother Barley (voice of Chris Pratt) aren’t interested in the existential questions that swirled around last year’s Toy Story 4; they just want to meet their dad.

The spell goes wrong, you see, or halfway wrong. Ian turns out to have Harry Potter skills when it comes to magic – but he’s just a beginner, gets distracted by Barley, and the result is that Dad doesn’t fully appear: “There’s no top part! I definitely remember Dad having a top part!”. Most of the film involves the two boys hanging out with half a torso, a pair of legs clad in beige Chinos – a risky idea that could make the whole thing look ridiculous (it does look a bit ridiculous), though it also takes the edge off the morbid premise. More importantly, it makes for some poignant almost-but-not-quite-isms, the legs – like that real-life audio recording – allowing for some contact, but only imperfectly. Barley taps on the shoes, like he did when he was a toddler, and the shoes respond. At one point ‘Dad’ starts to dance, and his sons dance with him. It’s very sweet.

The personal touch is evident in the characters, who behave more like kids of the 80s – when Scanlon himself was a kid – than today’s youngsters (pre-internet teens might as well be elves in a fantasy world to Generation Instagram). 19-year-old Barley listens to rock and is obsessed with a D&D-style game called ‘Quests of Yore’; Ian – who, like Scanlon, never knew his father – is more of a classic shy adolescent, terminally awkward around people (he wants to invite some classmates to his birthday party, but isn’t sure whether to address them as “dudes” or “gang”). “One of them is afraid of everything, and the other one isn’t afraid of anything!” says their exasperated mum (voice of Julia Louis-Dreyfus), teaming up with a gryphon-like creature called The Manticore (voice of Octavia Spencer) to find her wayward sons before they can unleash a ‘guardian curse’ in the process of finding a ‘phoenix gem’ that’ll restore their dad.

That’s how it goes in Onward, guardian curses and phoenix gems, bottomless pits and gelatinous cubes (don’t ask). The film is Spielbergian adventure with some fine action scenes and amusing creatures, notably the fallen-on-hard-times Manticore (“Do you know who I am?” she demands; “Some kind of winged bear-snake lady?” shrugs an unimpressed clerk) and a gang of delinquent biker fairies known as Sprites. (Also in the mix is a briefly-seen lesbian cop that’s led to the film being censored in some countries, though the LGBT angle is clearly designed to be easily snipped if necessary; Disney’s progressive, but not that progressive.) Then again, it also feels a bit… un-special. We’ve been here before, if only in all the other Spielbergian adventures.

Still, in a corporate world, there’s something quite endearing in Onward’s sincerity and heartfelt quality. The guys walk around with their half-formed dad – at one point they add a windbreaker and Invisible Man shades so he doesn’t look like just, y’know, a pair of legs – and you feel the gentle throb of a real childhood trauma that can nonetheless be played, after all these years, for goofy comedy. (The film’s ending is also, quite properly, bittersweet.) Ian comes of age, as a boy and a wizard, but only once he realises that you have to believe in yourself. You have to believe in the magic, says Barley, or the magic won’t happen; you have to “speak from your heart spire”. Onward speaks from its heart spire.

WITH THE VOICES OF Tom Holland, Chris Pratt, Julia Louis-Dreyfus

Coronavirus: Church to allow only 10 people at a time into services