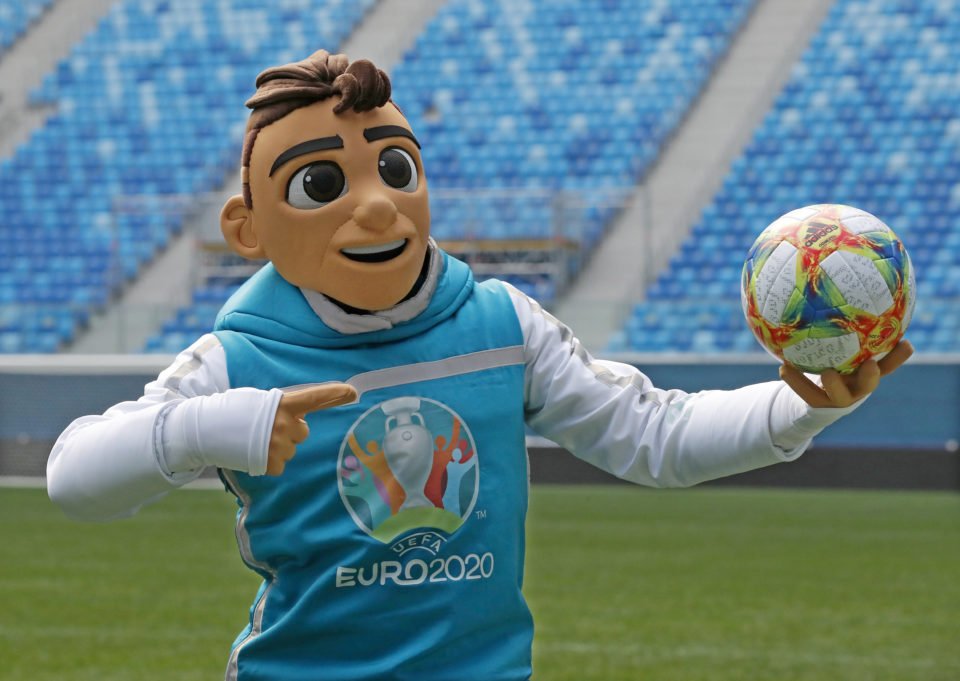 The official mascot for Euro 2020 Skillzy

European football’s governing body will on Tuesday discuss plans for the rest of the season as the coronavirus pandemic brought sport to a virtual standstill.

One of the key decisions to be taken by UEFA will be whether to postpone Euro 2020 until the summer of 2021, with the intention of allowing 2019-20 competitions that have been suspended following the Covid-19 outbreak at least the chance to be completed.

A number of national associations contacted by the PA news agency which are due to host matches this summer are understood to be ready to do all they can to assist, if the consensus is that the tournament be postponed.

Meetings will begin on Tuesday morning and an announcement on any decision is not expected until mid to late afternoon.

It is expected that the UEFA leadership, including president Aleksander Ceferin, will be involved in a number of conference calls.

Its offices in Nyon, Switzerland, will be closed to all but business-critical staff from Monday evening onwards, the PA news agency understands.

Rugby union and league both suspended their respective seasons on Monday and the Grand National was cancelled as organised sport in the UK effectively shut down because of the coronavirus crisis.

Premiership Rugby postponed all its fixtures for five weeks as the Rugby Football Union called a halt to “all rugby activity in England”, while the Betfred Super League has been suspended for at least the next fortnight.

The Heineken Champions Cup and Challenge Cup quarter-finals, which were due to take place from April 3-5, have also been postponed.

Super League executive chairman Robert Elstone said rugby league had bowed to the inevitable, with the Championship, League One, Women’s Super League and community games all also called off.

The Rugby Football League made the announcement in conjunction with Super League following a six-hour meeting of clubs in Huddersfield.

Elstone said: “Super League clearly recognise the gravity of the situation. We’re very mindful of our responsibility to our community, to our fans and to our players.”

Aintree’s Randox Health Grand National Festival, due to take place between April 2 and 4, will not go ahead.

Renowned as the world’s greatest steeplechase and the biggest betting event on the racing calendar, this year’s race had been due to see Tiger Roll bid to join Red Rum as the only three-time winner.

Jockey Club Racecourses, which runs Aintree, said it had been assessing the feasibility of running the race behind closed doors with minimal staff on site, but added: “The latest Government information on the measures needed to contain the virus have led it to believe this is no longer a viable consideration.”

Racing will go behind closed doors at all meetings in Britain from Tuesday, initially until the end of March. The fixtures at Wetherby and Taunton will be the first in England to be staged without paying members of the public.

Football’s National League has suspended matches until at least April 3.

The FA, Premier League, English Football League and Barclays FA Women’s Super League and FA Women’s Championship had agreed to postpone professional matches on Friday, but the National League decided to continue with its fixtures over the weekend.

The organisation said in a statement on Monday, however, that it was “clearly not practical for its fixtures to be fulfilled in the immediate future”.