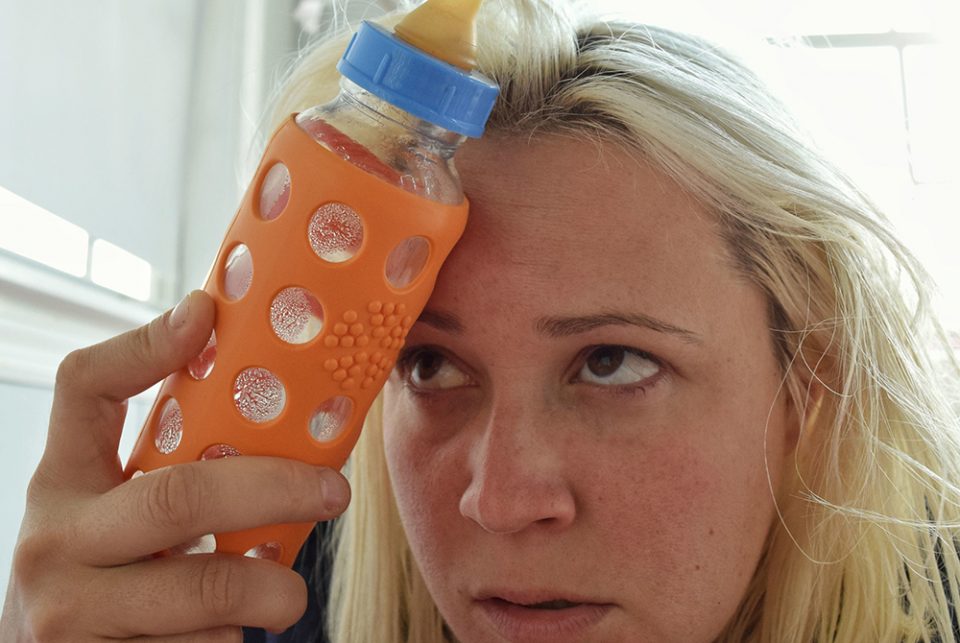 a mum with a baby bottle in a bad mood. iStock/PA. WARNING:

Motherhood can be painted as a near-perfect state of being, where stylish mothers dote on beautiful, clean and calm cherub-like children.

Real mums know it’s not like that at all. They often shout or despair as naughty, messy, shrieking toddlers run away from them, or colicky babies cry all night.

And that’s why real mum Lotta Sonninen, mother of 18-month-old twins, has written The Little Book of Bad Moods for Mothers.

“It might be okay for a mum to be tired, if the baby cries a lot at night, or stressed trying to combine work and family – but that’s only after she’s tried her best and done everything perfectly,” Sonninen says of the way motherhood is portrayed.

“It doesn’t seem quite as okay for a mum to be angered, or disappointed, or bored by motherhood, or feel like a complete failure at it – yet those feelings definitely exist,” she continues.

The book features a series of headings mums can log their own experiences under, such as: My most horrible pregnancy symptoms; Why didn’t anyone tell me this about babies?; As the mother of a small baby I failed at the following… ; The worst poo incidents; Times I’ve screamed at home.

It’s very definitely the dark side of motherhood, but there’s no denying it’s funny too – although not, of course, for fraught mothers at the time.

But the idea is for mothers in the midst of all the child-rearing madness to record their less than idyllic experiences so they’ll one day be able to look back on them with more than a little amusement – coupled with a sense of wonder that both they and their child made it through in one piece.

“However you felt about your body pre-pregnancy, you won’t feel the same way again. The female body is indeed capable of amazing things, such as stretch marks, varicose veins, milk stains, and swift transformation from perky to… well, un-perky,” she says.

“If you’ve always been able to walk wherever you please, it’s quite a change to suddenly have this clumsy wheeled thing with you. On the other hand, I’ve saved a lot of money by just not fitting into my favourite stores any more with my double stroller.”

The pee, the poo, the vomit

“Of course I’d heard the jokes about these a million times. But it’s not possible to quite grasp the feeling of constantly dealing with another person’s bodily fluids (or indeed the concern/relief/pride they may cause) until you’ve actually done it, sometimes on a hourly basis, for months.”

“Baby care is all about routine and repetition, and I’m being told this isn’t going to change much in the coming years. Changing thousands of nappies and saving a toddler from hurting their head for the millionth time will just give way to packing endless lunches and discussing curfew all over again.”

“I wish someone had told me this: when picking a name for your baby, don’t forget you’re going to spend a large part of the next years yelling, barking or screaming that name. There’s a good chance, though, that the child will assume he/she is called ‘No! No no no!’ at first.”

“Most of the people with older children I know are spending their evenings driving the kids around to football practice and guitar lessons (the normal ones) or architecture club and parkour workshop (the scary ones). Is it ok to tell your child ‘go to your room and read a book, there’s a hobby for you’?”

The money and the space

“Babies don’t take up that much space, although their belongings require a disproportionate amount of storage space. Teenagers, though, will require an entire room, fill it up with ugly and expensive things you have to pay for, and lock themselves in there to sulk and/or consume suspicious internet content while you drag home massive amounts of food from the store, never to be thanked with more than an eye-rolling WhatsApp emoji.”

“I’ve only been a mum for a year-and-a-half and I already have the feeling the kids aren’t going to turn out at all the way I imagined. This, of course, might very well be a good thing.”

Cannabis use has risen with legalization and COVID lockdowns -U.N. report