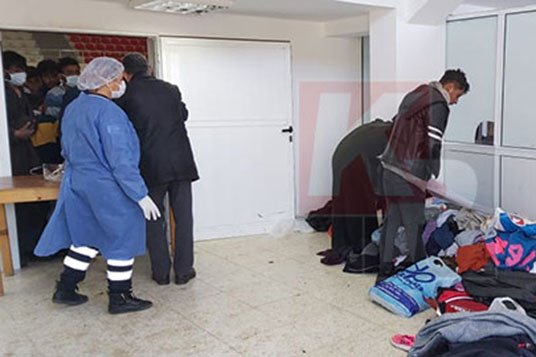 A GROUP of 175 Syrian migrants, who arrived in Trikomo in the north on Saturday, after being denied entrance to the government-controlled areas on Friday, is in good health, Turkish Cypriot authorities said.

The north’s ‘health minister’ Ali Pilli said the migrants were being tested and monitored at the hospital in Famagusta.

Earlier, the police spokesman in the government-controlled areas, Christos Andreou said the migrants were refused entry as per the instructions given by the government due to the coronavirus outbreak.

“The police acted according to the ministerial decisions, which ban entry into Cyprus, as part of the protection measures due to the spread of coronavirus (Covid-19),” Andreou said.

According to Turkish Cypriot media outlet, Kibris Postasi, the fishing boat was carrying 30 women, 69 children and 76 men, all Syrians.

They were taken to the Fazil Kucuk Sports Centre and given blankets, food and water.

The boat was first spotted off Cape Greco on the south-east coast of the island on Friday. Cyprus’ marine police went to deter the vessel from heading for shore.

They brought fuel, supplies and water to the boat but the occupants refused the help when they were told the supplies were to help them return to the country from which they had sailed.

The 15-metre-long fishing boat remained in play off some 13 nautical miles off Cape Greco until 11pm Friday night after which time it set sail and some time later, crossed the Maritime Security Line – an extension of the buffer zone – into ‘TRNC waters’. Territorial waters stretch out 12 nautical miles.

Cyprus’ marine police monitored the situation into the night and tracked the vessel on radar until it lost the signal around 2.30am.

Police remained in place all night to deter the boat from heading to shore in the south of the island.