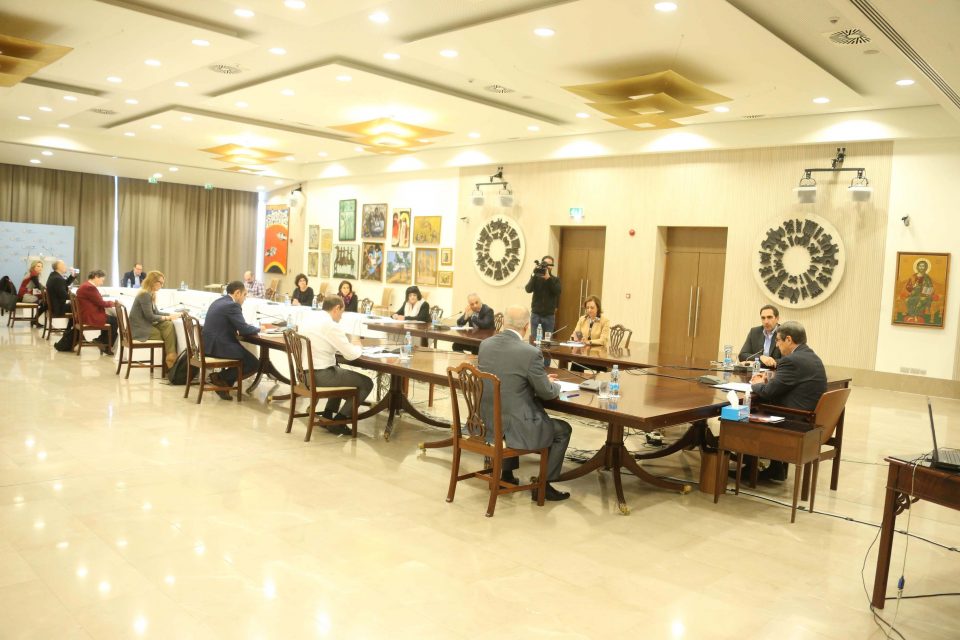 President meeting with the health experts on Friday

THIS WAS the week that the world finally shut down. Borders were sealed, air travel halted, schools and business closed as societies went into quarantine and social contact was cut to absolute minimum. Once bustling urban centres are deserted, places where people met have all closed, the streets are empty, life having been sucked out of all cities by government decrees designed to contain the spread of the coronavirus, described as the invisible enemy.

We have now fully crossed the line that separated life before and after the coronavirus, into a twilight zone of isolated, quarantined living, euphemistically known as social distancing. We have entered an unfamiliar, alien world in which we have to completely change how we live, forget our lifestyle and liberties, put aside our plans and adapt to the new reality of basic existence that might last two, three or six months. Nobody can forecast for how long normal life will be suspended as the lifting of the draconian measures will not depend on a single government.

On Saturday morning, according to the Johns Hopkins University tracker, confirmed cases passed the 275,000 mark, there had been 11,402 deaths and more than 88,000 had recovered. As statisticians point out it was impossible to draw any conclusions, as these figures do not take into account the thousands of cases with mild symptoms that were not recorded. Some have even suggested that governments were over-reacting, but no government was prepared to take risks after seeing the tragedy unfolding in Italy which overtook China as the centre of the biggest outbreak on Thursday. Even the UK government, which had argued there was no need for drastic measure on Friday put the country in lockdown.

In Cyprus the government has acted decisively, following the advice of the WHO and ECDC, stepping up the counter measures throughout the week. Last Sunday the country was finally put in lockdown to ensure social distancing and people have complied. There was a strong reaction to the barring of entry to Cypriots and foreign residents that were abroad, the government demanding a health certificate from a list of accredited centres it had compiled that was in effect unobtainable. This meant thousands of students would be stranded in the UK and Greece even though universities had shut down. The matter was badly-handled by the government, which failed to provide an adequate explanation for its decision – it was probably not prepared to quarantine thousands of people.

The government should be credited with acknowledging mistaken decisions – health minister Constantinos Ioannou, to his credit has owned up to mistakes – and correcting them. It has chartered planes to bring some citizens back having set up more quarantine centres. It announced the closing down of all service garages but was not afraid to rescind the decision after advice that this would have immobilised too many people at a time when the use of public transport was being discouraged. There may be a lockdown but people still needed to drive to the supermarket while some also have to go to work.

Probably the biggest problem has been the infections of health professionals working in the public hospitals. Measures are being taken by the government to address the problem while it has also issued a decree drafting all registered doctors and nurses to help the state’s effort to combat the spread of the virus. Despite these inevitable setbacks, attributable to the lack of experience in dealing with a pandemic, the authorities have been doing commendably in tracing people that had come into contact with confirmed cases. This is how the transmission chain is broken and it helps that Cyprus is a small place, making the tracing of people easier.

All the measures for flattening the peaked curve of incidence of cases so that healthcare system can cope, have been taken by the authorities. Hospitals are being prepared to take more cases in need of treatment, while Ioannou said an additional number of respirators had been secured. While the government has imposed all the necessary measures, these alone will not contain the spread of the virus.

We must all follow the advice of the government, stay at home and go out only when it is absolutely essential. It is difficult to change our lifestyle, but as the health minister said, “we are in a state of emergency,” and all we are being asked to do is “stay at home.”

Tales from the Coffeeshop: Virus fears extra-high among the chronically lazy