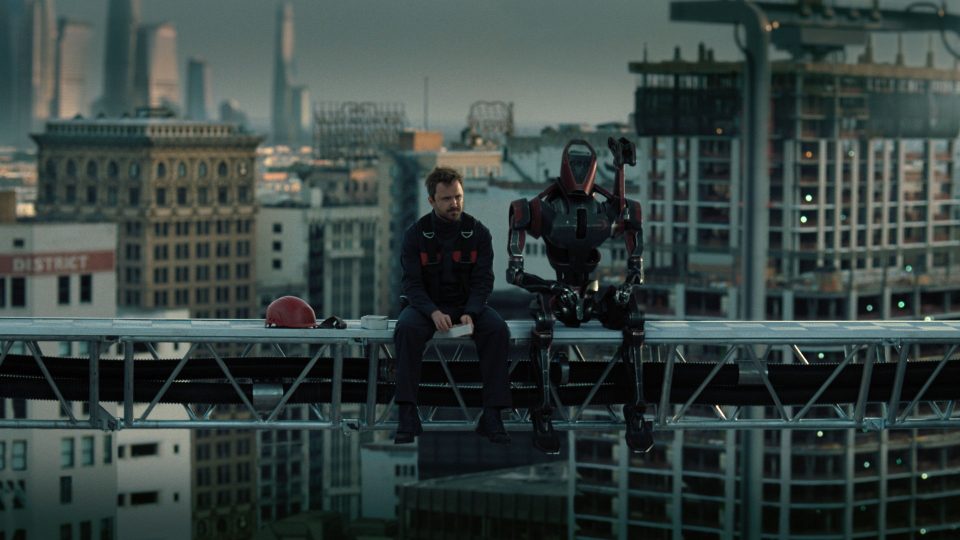 From shutting off the headlines to limiting social media, actor Aaron Paul says he has cracked the code when it comes to sustaining a positive, happy future. He tells Gemma Dunn he feels better than ever

Aaron Paul has taken his future into his own hands – at least where technology is concerned.

For one, he hasn’t owned a computer in more than 10 years, and that’s just the start.

“I’m rarely around my phone,” begins the Breaking Bad star, 40.

“I deleted Twitter and Facebook a while ago; I’m kind of still holding on to Instagram but even that gets a little heavy at times, [but] we’re used to surrounding ourselves with negativity that is poured on to us by the news.

“I shut off the news a long time ago,” he muses, deep in thought.

“Honestly, I don’t know if we’re meant to know about all this sadness around the world. I think it’s changing us, as a society. Now it’s like, ‘Oh my God, is there hope?’ I say turn off the news and create your own hope.”

Armed with a bottle of hand sanitiser, Paul, 40, is simply saying what a lot of us are thinking right now. But this isn’t just in relation to the current coronavirus pandemic or our unsettling political climate.

Rather the American actor is contemplating his future due to the subject matter of his latest show, Westworld.

Joining the third season of the Emmy-nominated sci-fi drama, Paul plays Caleb Nichols, a construction worker and veteran who crosses paths with Dolores (Rachel Evan Wood) and challenges her notions about humanity.

In the aftermath of last season’s massacre, Dolores, Bernard (Jeffrey Wright) and an unknown host, occupying the body of Delos exec Charlotte Hale, begin a new chapter – outside the park.

Crossing into uncharted territory for its latest eight-part run, the tentpole hit, created by Jonathan “Jonah” Nolan and Lisa Joy, will therefore step away from the Western genre to explore a futurist, cyberpunk-influenced “real world” (2058 to be exact), dominated by an ominous technology company.

And Paul couldn’t be happier to be hurtled almost 40 years ahead.

“It’s honestly been everything that I thought it would be. I was such a massive fan of this show,” he gushes, having joined returning cast members Wood, Thandie Newton, Ed Harris, Jeffrey Wright and Tessa Thompson.

“When I got the phone call that Lisa and Jonah wanted to sit down and talk to me about how they saw me fitting into Westworld, I was deep into negotiation on another new series,” he reveals. “And I’m like, ‘Oh my God, I have to take this meeting’.

“When they pitched me the world and how they wanted to go outside of the park and see what this futuristic society was really all about, yeah… [I was in].”

As for Caleb: “They sort of gave me his history, his backstory, and then we ran with it,” he says, careful not to give too much away.

“Again, I’m just so obsessed with science fiction, and Caleb being sort of the point of view of a man living in this futuristic society was incredibly exciting to me. It felt like a really fun thing to dive into.”

And the rumoured-to-be-tough production schedule?

“Insane,” Paul says point blank. “[On my first day] everyone told me, ‘Welcome to war. All the rumours are true. It is a hard show. Good luck’. And it really was that, but in a great way.

“On Mondays we’d do our daytime shoots, but then starting on Tuesdays, our call time would be two or three in the afternoon – and then by Wednesdays we’re doing nothing but night shoots and then Thursdays, Fridays, sometimes Saturdays, night shoots, and then back on the Mondays, day shoots,” he lists.

“It’s just, my God, so hard, but also so fulfilling. Everybody in front of the camera, off camera, were just so excited to be there and to be a part of telling this story. You could just feel the energy on this massive set.”

The show asks some big questions about the nature of our reality, free will, and what makes us human, too. Something Paul is keen to delve into.

“I mean, Westworld is very much a science fiction show, but we all can agree that it feels like it’s kind of somewhat grounded in reality, which is terrifying,” he notes.

“I love just being submerged in this, but then being submerged in it, it’s impossible not to just get as much information as possible and so I find myself down really dark, long rabbit holes of the simulation reality theory, and all of, like, what are the dangers of technology?

“It’s such a blessing and a curse, us as society and data control and our data collection. It’s crazy, you know.”

Has stepping away from such platforms improved his wellbeing?

“Oh 100%. I mean, I think it’s the whole ignorance is bliss theory, but I used to be just suffocated in the Trump mania of it all,” Paul fesses, having previously been outspoken about the US president on his Twitter feed.

“Now I just refuse to watch it – as there’s nothing literally nothing I can do, other than being depressed by it. I focus on my friends and my family and we lift each other up.

“I feel like I’ve like cracked a code in a way, where I cannot begin to tell you how much better I feel.”

The good news is his lifestyle change hasn’t had an impact on his work, with the father-of-one busier than ever.

While in recent years, BoJack Horseman (on which he also served as an executive producer), The Path, and Apple TV+ crime series, Truth Be Told, have padded out his already impressive CV.

Westworld was different though, as it was already a proven show, he says elatedly: “I’ve never joined something that was already such a massive success, and so I was just incredibly excited.”

As for what’s next, he’s open to feeling inspired – but he will admit he doesn’t want to play another struggling, lovable drug addict in the near future.

“But I do tend to gravitate towards roles that I love to watch,” he quickly adds, in reference to his award-winning turn as Pinkman.

“I love hard hitting dramas, I love heavy stories, and I don’t mind playing characters that are just going through a lot.

For me, it has something for me to sink my teeth into – so as long as it has that, and the story is interesting.”

Westworld is out now

Premier League clubs to meet on April 3 to discuss contingencies

Ennio Morricone’s clever scoring in A Fistful of Dollars