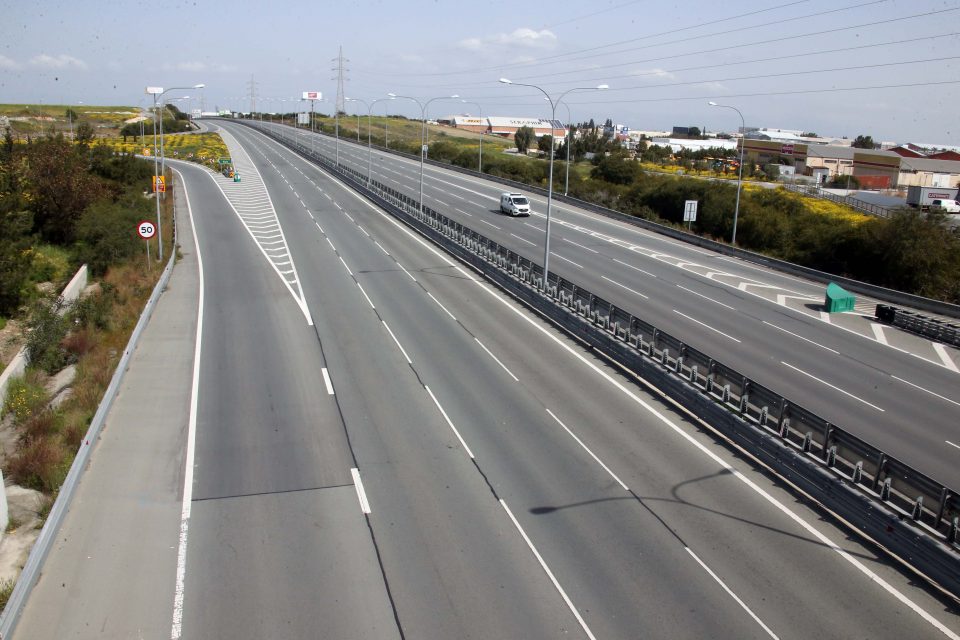 A deserted Nicosia-Limassol highway on Thursday

By Elias Hazou and Annette Chrysostomou

The government approved stiffer penalties for those violating the restrictions on movement on Thursday as 14 more people tested positive for Covid-19, raising the total in the south of the island to 146.

The ministry of health said four of the new coronavirus cases arrived from overseas, eight were identified after contact tracing, one person is a doctor from Paphos, and there is one more individual whose background of movements is being investigated. The numbers include three cases from the British Bases.

To date of the 146 confirmed cases, 76 came into contact with other people found to be infected with the virus.

Meantime in the north nine new infections were confirmed, bringing the total there to 56.

Earlier in the day, health officials were appealing to the public to follow the health ministry’s rules on movement.

Giorgos Karotsakis, executive director of the Larnaca and Famagusta hospitals, cited the case of a patient admitted to Larnaca hospital’s general clinic for a stroke. The man also tested positive for coronavirus. He had frequently visited coffee-shops despite the ban on unessential movement.

Karotsakis told the Cyprus News Agency that the man, 75, had contacted the virus prior to his admission to Larnaca hospital.

He called the 75-year-old’s defiance of the ban on movement “unacceptable and condemnable”.

“Despite the health minister’s decree banning movement, the 75-year-old had chosen to frequent coffee-shops, putting in danger not only his own life and those of his family but also of doctors and nurses,” Karotsakis told CNA.

According to the official, 15 doctors and 32 nurses and other staff who have come in contact with the 75-year-old are now in self-isolation for 14 days.

The 75-year-old has been transferred to the Famagusta hospital which is the reference hospital for Covid-19 cases.

“Everyone must realise that personal hygiene rules and the decrees need to be adhered to, so as not to put at risk the health of health professionals, who in these difficult times […] must provide their services unhindered so that we can overcome the coronavirus pandemic,” Karotsakis said.

An expert meanwhile assessed that the coronavirus spread could be peaking in Cyprus, but also cautioned against complacency.

Dr Leondios Kostrikis, professor of biotechnology and virology at the University of Cyprus and member of the health ministry’s advisory committee on the virus, told state broadcaster CyBC: “It seems that very soon, if all goes well, we will reach the peak of the epidemic.”

On the same day, the cabinet approved tough legislation for those caught breaking the Quarantine Law, invoked by the government in imposing an effective curfew since Tuesday 6pm.

The cabinet gave the nod to a bill amending the law on spot fines to include a €150 fine for offenders breaking quarantine orders issued by the health minister.

The spot fines will be imposed by police officers on anyone violating the restrictions in circulation and other bans introduced by the government on Monday.

But Justice Minister Giorgos Savvides said some offenders should not expect to get off with just a €150 fine.

“There is the capacity, if judged necessary by law enforcement officers, not to impose the fine and take the case to court,” the minister said. “In this case, the offender will face a jail sentence and a fine that is much higher than the spot fine.”

The Quarantine Law provides for a jail sentence of up to six months or a fine of 450 Cyprus pounds (about €768).

That fine, however, was increased by the cabinet on Thursday to €3,000. The bill needs parliament’s approval.

The minister said that despite the limitations imposed by the courts on the cases as part of the measures, “violations of the Quarantine Law are among the exemptions … so they will be submitted and tried immediately”.

From 6pm Tuesday, when the lockdown on movement was put in place, and until Thursday evening police booked some 500 drivers and pedestrians.

Also, since March 11 police have conducted around 20,500 inspections of premises, booking 46 non-compliant persons.

Savvides reiterated that non-compliance could “force” authorities to roll out even tougher restrictions on outdoors movement.

With businesses island-wide affected by the general shutdown since earlier this month, the cabinet finalised a scheme suspending repayment of loans for nine months and a €2bn stimulus plan in a bid to boost liquidity in the economy.

The bills governing the loan scheme, and other bills for a €360m direct relief package, were tabled to parliament. They are expected to be discussed at the House finance committee on Friday and – depending on the consensus there – will be forwarded to the plenum for a vote.

Municipalities have lost quarter of their income, Vyras says

Trial to begin in September over killing of Ukrainian man