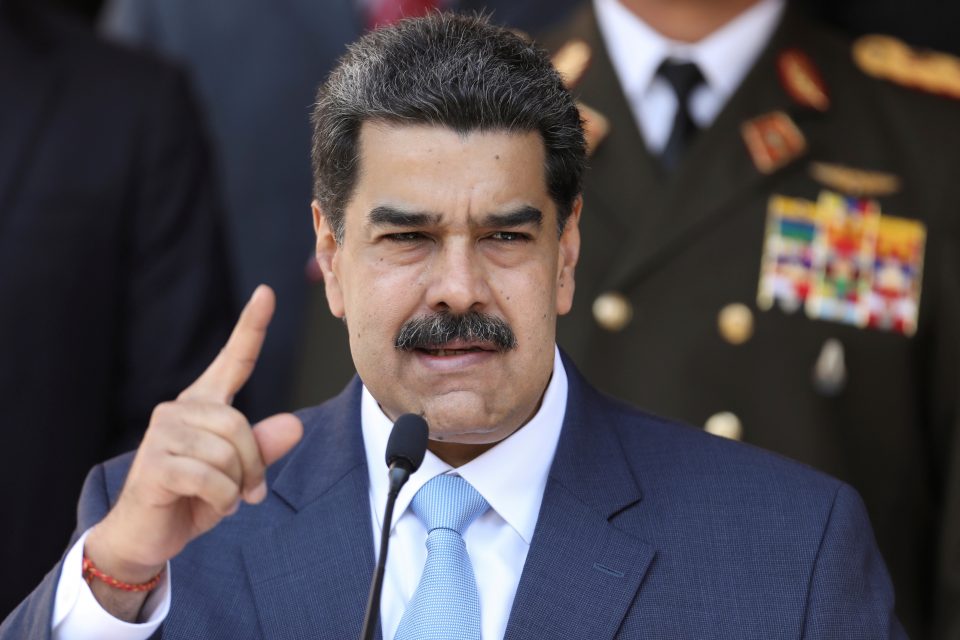 The US government on Thursday indicted Venezuelan President Nicolas Maduro and more than a dozen other top Venezuelan officials on charges of “narco-terrorism,” the latest escalation of the Trump administration’s pressure campaign aimed at ousting the socialist leader.

The State Department offered a reward of up to $15 million for information leading to the arrest and conviction of Maduro, whose country has been convulsed by years of a deep economic crisis and political upheaval.

The indictment, a rare US action against a sitting foreign head of state, marks a serious new phase against Maduro by Washington at a time when some US officials have privately said President Donald Trump is increasingly frustrated with the results of his Venezuela policy.

Attorney General William Barr, announcing charges that also included corruption and drug trafficking, accused Maduro and his associates of conspiring with a dissident faction of the leftist Colombian guerrilla group FARC “to flood the United States with cocaine.” “While the Venezuelan people suffer, this cabal lines their pockets with drug money and the proceeds of their corruption,” Barr said of Maduro and the more than a dozen others who were indicted.

Venezuela‘s information ministry did not immediately reply to an email seeking comment. The US government has previously lodged criminal indictments against members of Maduro’s family and inner circle.

He and his allies have dismissed such allegations as a smear campaign, and argue the United States is responsible for drug trafficking given its role as a leading consumer.

Maduro is already under US sanctions and has been the target of a US effort aimed at pushing him from power. He took office in 2013 after the death of his mentor President Hugo Chavez, a staunch US foe.

Other Venezuelan officials whose indictments were announced on Thursday include Defense Minister Vladimir Padrino Lopez, senior socialist leader Diosdado Cabello and the chief justice of the country’s supreme court, Maikel Jose Moreno Perez, 54, who was charged with money laundering. The US government is offering $10 million for information leading to Cabello’s arrest.

The United States and dozens of other countries have recognized opposition leader Juan Guaido as the country’s legitimate president. But Maduro has remained in power, backed by the country’s military and by Russia, China and Cuba.

US officials have long accused Maduro and his associates or running a “narco-state,” saying they have used drug trafficking proceeds to make up for lost revenue from a Venezuelan oil sector heavily sanctioned by the United States.

‘DEPLOYED COCAINE AS A WEAPON’

The indictments were unsealed in New York, Florida and Washington.

Maduro and his top lieutenants ran a “narco-terrorism partnership with the FARC for the past 20 years,” stated Geoffrey Berman, the US Attorney for the Southern District of New York, who said the Venezuelan president “very deliberately deployed cocaine as a weapon.”.

“The scope and magnitude of the drug trafficking alleged was made possible only because Maduro and others corrupted the institutions of Venezuela and provided political and military protection for the rampant narco-terrorism crimes described in our charges,” he added.

Berman accused Maduro and his co-defendants of “using their political and miltiary power to promote narco-terrorism for their personal gain.” He said the case took many years to build.

The US Attorney for the Southern District of Florida Ariana Fajardo Orshan said she sees signs of Venezuelan officials’ dirty laundered money throughout her area every day, from fancy yachts to million-dollar condos.

“This party is coming to an end,” she said.

Asked whether the US government wants to capture Maduro dead or alive, Barr said: “We want him captured so he can face justice in US court.”

Barr said the administration does “expect eventually to gain custody of these defendants” and would explore all options. But he offered no indication of how US authorities believe they might get their hands on Maduro, who has endured more than a year of heavy international pressure and on-again, off-again street protests as the OPEC member’s economy has continued to unravel.

Maduro’s international travel could be restricted, given that Washington would be able to request that he be handed over if he visits a country that has an extradition treaty with the United States. US authorities can also freeze any assets he has in the United States, though such holdings are considered unlikely.

The Justice Department said that since at least 1999, Maduro, along with Cabello and others, acted as leaders and managers of the ‘Cartel of the Suns’. The name, it said, refers to the sun insignias affixed to the uniforms of high-ranking Venezuelan military officials.

An indictment accused Padrino, who holds the rank of general, of using his control of the Venezuelan military to facilitate cocaine flights to the United States.

Venezuelan Vice President Tareck el-Aissami was charged with evading US sanctions. In 2017, the US Treasury Department imposed sanctions against him for alleged drug trafficking and other related crimes. Two nephews of Maduro’s wife were convicted in US federal court that year for drug smuggling.

Coronavirus: Free delivery system for essential items in place for elderly and vulnerable

Americans urged to wear masks outside as coronavirus pandemic worsens