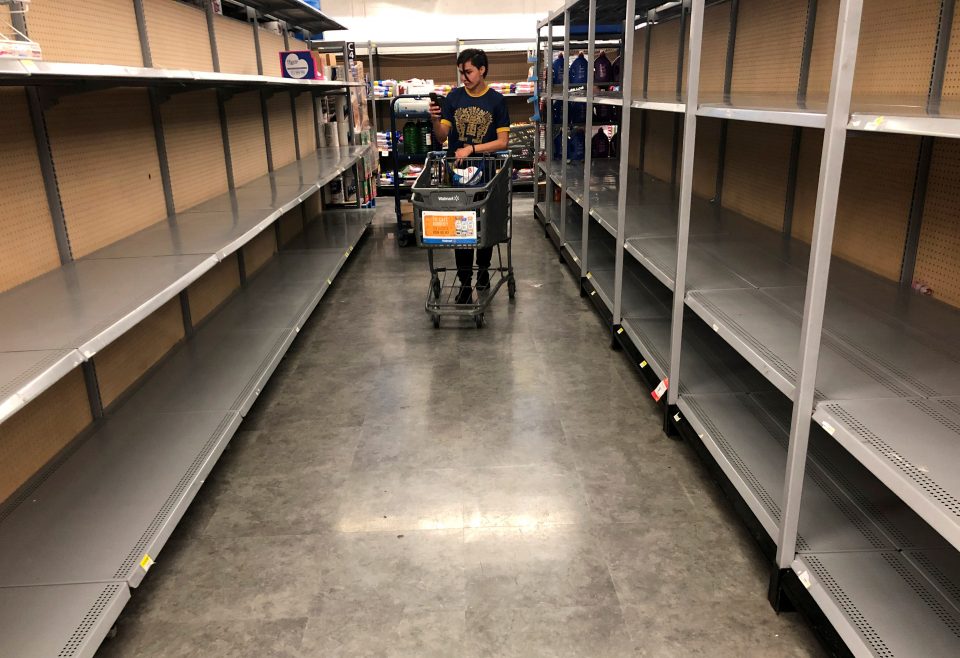 Global food security concerns are mounting with around a fifth of the world’s population already under lockdown to fight the widening coronavirus pandemic that has infected over 470,000 people across 200 countries, killing 21,000.

Panic buying of household staples like toilet paper and cleaning products have occurred in nearly every country hit by the virus, and empty shelves in supermarkets have been common.

Compounding the anxiety stemming from erratic consumer buying has been concern that some governments may move to restrict the flow of food staples to ensure their own populations have enough while supply chains get disrupted by the pandemic.

Fresh fruit and vegetables will become increasingly scarce in Europe, suppliers warn, as the coronavirus pandemic hampers the global movement of produce and of the people needed to gather crops.

Governments are looking at ways to ease any shortage, including “green lanes” to allow fresh produce to move quickly across EU borders, recruiting a “shadow army” of harvesters and loosening travel rules for migrant workers.

While Europe’s supermarkets say they are still getting most produce, supply pressures are building at source, including in Africa, a key provider of fresh goods, and within Europe.

Stores that are already dealing with hoarding by customers may struggle to keep shelves stocked.

In Kenya, a major supplier of green beans and peas to Europe, half of the workers in the sector have been sent home on mandatory leave because of the industry’s inability to ship orders, even as demand from European retailers surge.

“Their (European) stocks are being depleted by the day,” said Okisegere Ojepat, chief executive of the Fresh Produce Consortium of Kenya which groups over 200 growers and exporters.

Shipments from another key supplier, South Africa, are becoming more challenging with the country set to begin a 21-day lockdown this week.

“We were in reasonably good shape until earlier this week but now things are becoming very difficult,” said Hans Muylaert-Gelein, Managing Director at Fruits Unlimited, a South Africa-based company that exports fruits and vegetables to the UK.

“More and more flights are being grounded so I expect there are going to be big disruptions.”

Those planes that are flying are charging more. Operators have tripled the price per kilo of produce to $3 in the past two weeks, said Hosea Machuki, head of the Fresh Produce Exporters Association of Kenya representing 117 growers and exporters.

Western supply chains are buckling as problems ranging from a shortage of truck drivers to restrictions on seafarers hit the smooth flow of goods, freight logistics operators say.

Even longer-lasting produce like citrus fruit, which is normally transported by sea, could be stranded because of the shortage of containers linked to China’s shutdown, said Muylaert-Gelein.

“Oranges and lemons, the old ambassadors of Vitamin C, are in high demand. Also roots, carrots, cabbages, anything that has health properties people have stocked up on,” he told Reuters.

A shortage of migrant workers also threatens to disrupt production in several top European suppliers including Spain, the biggest exporter of fruit and vegetables in the EU.

Some 16,000 Moroccan seasonal workers, mostly women, were expected to arrive in the Huelva region in Spain to pick strawberries and red fruits under an agreement between the two countries.

Less than half had made it by March 12, as Morocco closed its borders to passenger traffic, said Abdelmounaïm Madani, head of the Moroccan job promotion agency ANAPEC. The country’s lockdown is due to last until April 20.

The challenges included moving workers from accommodation to farms while maintaining social distancing, he said.

“Before they were collected in a minivan of eight or nine people and then worked the day and then moved back. Now these collective transports are no longer possible.”

Binard said supermarkets may move towards selling produce which could be more easily mechanized in the supply chain.

According to Muylaert-Gelein, Spain’s need for migrant workers could affect a wide range of crops including tomatoes, cucumbers and peppers.

“With the borders closed that is going to become very challenging and I think that will impact quite dramatically on prices and availability,” he said.

Farmers and unions in Spain said the production, processing and export of fruit and vegetables was still going smoothly, although the state of emergency is restricting people’s access to farms and packing areas.

In Germany, whose food sector relies on some 286,000 seasonal workers every year, the agriculture minister has talked with carrier Lufthansa to see if they could be flown in, if they can prove they are not infected.

Other ideas include temporarily easing the time limit for seasonal workers beyond the current 70 days.

France, where farmers forecast a shortage of around 200,000 labourers during the harvest period, has also appealed to newly laid-off workers to help pick fruit and vegetables.

Border restrictions introduced to stem the spread of the virus also disrupt the movement of produce within the EU, with traffic jams of up to 18 hours at some border points.

The European Commission has urged the 27 EU countries to adopt measures to ensure the free flow of freight along “green lanes” with border crossings lasting no more than 15 minutes.

Norbert Lins, chair of the agriculture committee of the European Parliament, said “green lanes” also had to apply to essential inputs such as feed, fertilisers and plant protection products.

He also called on the EU’s executive and member states to find ways to allow some sort of cross-border movement for seasonal workers during the harvest season, even if travel restrictions are still in place.

European food retailers are keeping a close eye on the situation.

A spokesman for the Aldi Nord discount supermarket chain said that in Germany, fruit and vegetable supplies were secure and supply chains were functioning.

“Despite this we are watching the current developments and making a new assessment of the situation from day to day.”

A spokeswoman for UK-based food retailer Tesco said she could not comment specifically on fruit and vegetables but in general there had been a surge in demand and there had been some empty shelves as a result.

“We would ask our customers to buy only what they need so that there is enough for everyone,” she said in a statement.

Nobody said that this virus infects only the elderly