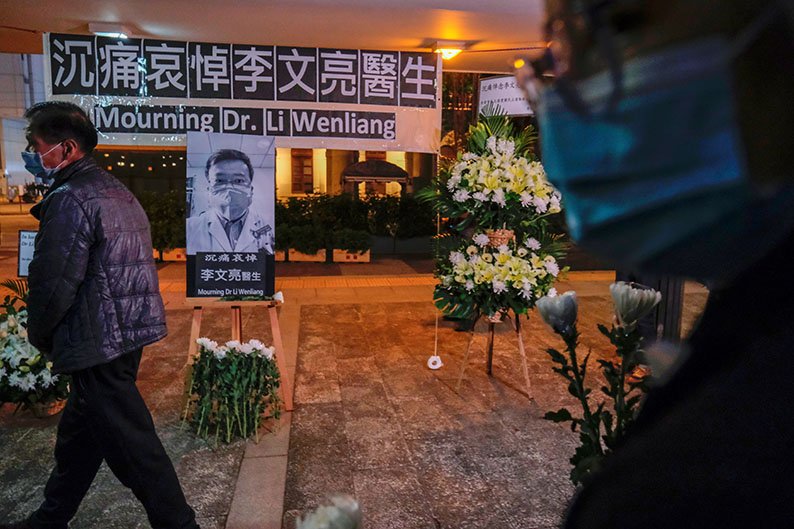 People attend a vigil for Li Wenliang, the ophthalmologist who died of coronavirus in Wuhan, in Hong Kong on February 7

US ambassador to Cyprus criticises China, says it had special responsibility to be transparent over coronavirus pandemic

The celebrated American author Mark Twain reportedly once said, “A lie can travel halfway around the world while the truth is putting its boots on.”  That statement is especially true in the 21st century. In today’s age of social media, it has unfortunately become normal to see false information reach a broad audience instantaneously through the internet. When a vicious and dangerous conspiracy theory is uttered from an official government mouthpiece, however, we should take particular notice.

Regrettably, this is what occurred earlier this month when a spokesman for the foreign ministry of the People’s Republic of China (PRC) levelled false accusations against the United States related to the Covid-19 virus.

The fact that the outbreak originated in Wuhan, Hubei province – and that the Chinese government was the first to know about it – is indisputable.  The virus had been circulating in Wuhan since December, or earlier, according to Chinese government accounts. Doctors on the front lines frantically tried to treat the first patients even as they notified provincial and PRC government authorities of the emergence of this new “Sars-like” virus.

The Chinese government had a special responsibility to be fully transparent about what Chinese experts knew. Yet by early January, Chinese authorities had already ordered virus samples destroyed.

Even worse, Chinese authorities actively censored and punished brave Chinese people who tried to tell the truth. Li Wenliang, an ophthalmologist who later contracted the disease and died from it, was questioned by provincial authorities and forced to sign a confession that he spread “false rumours”.  PRC authorities did their best to suppress any information about the spread of Covid-19, even as Chinese doctors heroically attempted to save the lives of dozens, hundreds, and then thousands of patients who were falling ill.

As precious weeks passed and the seriousness of the outbreak became apparent, PRC officials made extensive preparations to protect their own population, while only selectively sharing information, such as genetic sequence data, and continuing to obstruct international health authorities who were offering assistance, requesting access, and seeking more information.

Had these same authorities done the right thing and sounded the alarm about this new disease, China – and indeed the rest of the world, including Cyprus – might have been spared the impact on our populations.

So, what do we do now?  Covid-19 has spread from Wuhan throughout the world and knows no national boundaries. We must redouble our efforts to cooperate and share factual information about this disease rapidly and transparently.

The Republic of Cyprus, by contrast, has demonstrated transparency in the face of the Covid-19 pandemic. From the day it announced its first case, the government has been open about the number of people infected, proactively published information that helps its citizens gain access to medical services, and has aggressively pursued polices in keeping with expert advice in the interest of minimising the spread of the virus.

The government has also worked tirelessly to make information and assistance available to both visitors and non-Cypriot residents as restrictions and closures have been put into place.  President Nicos Anastasiades and Health Minister Constantinos Ioannou have been clear with the people of Cyprus about the risks they face. I especially welcome the expressed determination of President Anastasiades and Mr Mustafa Akinci to battle this virus together, as well as the efforts of the members of the Bicommunal Technical Committee on Health. The generosity of the deputy tourism ministry and other foreign citizens who may be stranded here in Cyprus owing to flight cancellations is inspiring, but hardly surprising to those of us who know that for all Cypriots, hospitality is a core value.

For decades, the United States has been the world’s largest provider of bilateral assistance in public health. That investment in global health security is particularly evident today in Cyprus, where the Cyprus Institute for Neurology and Genetics (CING) has been a national leader in the fight against Covid-19. CING was founded and supported by grants from the United States Agency for International Development (USAID) in the 1990s. It has tested over 3,500 people in Cyprus for the coronavirus, giving Cyprus one of the highest rates of testing in the world.

Since 2009, American taxpayers have made available globally more than $90 billion dollars for health through USAID and the Department of State. Of that figure, USAID has invested over $1.1 billion dollars to prevent, detect, and respond to endemic and emerging health threats, including diseases like Covid-19.

US innovators are rushing to combat the new coronavirus and develop a vaccine, and new treatment options are being tested in the United States and Asia.

The rapid response received a boost this month as President Trump signed into law $8.3 billion in federal funds to fight Covid-19. The funding is helping federal agencies and their private-sector partners to quickly produce vaccines and new therapies.

In congressional testimony in March, Dr Anthony Fauci, Director of the National Institute of Allergy and Infectious Diseases (NIAID), said scientists are speeding vaccines through the early stages of development at “record” pace.

So when the crisis finally abates, we should take stock of the outcome and evaluate the costs of the initial breakdown in international collaboration by the PRC, the effects of suppressing important factual information, the impact of failing to share information during the early stages of the epidemic, and the fallout from disinformation campaigns throughout the course of this pandemic.

Make no mistake, the heroes of this story are the world’s doctors and nurses, many of whom are in China, who have put their lives on the line to halt this terrible disease and warn the world of its dangers. Accurate information must move freely – especially during crises. A government’s duty is to save lives, not save face.

As the American ambassador to Cyprus, I have been privileged to call this beautiful island my home for a year now. I have experienced first-hand the talent, skill, and commitment of Cypriot health care professionals. They are peer of the best in the world, and their dedication and ethic of service is an example to all.

Lastly, I have faith in the good people of Cyprus, with their ingrained spirit of generosity and their firm sense of solidarity across the generations, to weather this storm and emerge even stronger.