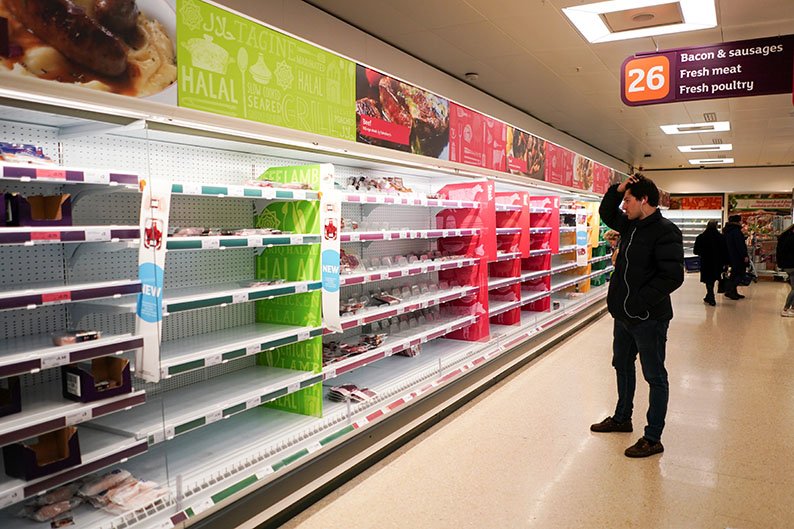 Not Britain's finest hour - empty shelves in a London supermarket

Every crisis is also an opportunity and although the world would have preferred to give whatever opportunity presents itself a miss, the huge number of retired medics and nurses prepared to place their lives in harm’s way to help the NHS fight corona virus proves the truth of the proverb.

London under corona virus occupation is surreal. The place is barren, we wash our hands a lot and try not to touch our faces and stay two metres apart from one other.

The idea is that if the virus cannot access a human face it will be defeated because it needs a host within about 72 hours of being shed on corona friendly surfaces – after which it dies.

One interesting feature of the epidemic is that it does not spare political leaders or the rich and famous – particularly those who travel widely and attend lots of meetings. But it kills the old and infirm, and although not a serious condition for the majority, the fact is that it is very infectious and occasionally kills younger people too.

Last week Michel Barnier, the EU’s top Brexit negotiator, developed mild symptoms of corona virus. He probably caught the virus in the line of duty but continued working from home while recuperating.

There then was a scare about German Chancellor Angela Merkel; it was thought she caught it from a doctor who vaccinated her for bacterial pneumonia, who afterwards tested positive for corona virus.

Fortunately, it was a false alarm for the German chancellor as tests showed she had not contracted the virus. Not so in the case of Prince Charles, heir to the British throne, who apparently contracted a mild form of the disease at a royal dinner.

A bit lese majeste of the virus to inflict itself on royalty but fingers crossed Charles will recover soon. He was seen clapping for the NHS last Thursday, which was very reassuring.

But then as I was writing this week’s column, Boris Johnson and his health minister tested positive for corona virus, which was again said to be mild. Let’s hope they will be OK, and Britain doesn’t end up having a constitutional crisis as well as the public health and economic crises the country is enduring.

People are keeping calm and carrying on in the normal way but in the end it may be a case of cometh the hour cometh the man: Jeremy Hunt would be my choice for prime minister or health minister if either of them are incapacitated as he is both experienced and has been serious about this pandemic.

Not everyone, however, is calm. Some people are so selfish they emptied the supermarket shelves of toilet paper and decontamination liquids and sprays despite assurances from government and the supermarkets that there are no shortages.

The obsession with toilet paper in a country like Britain where there is plenty of water is perplexing. A jet of water directed at the difficult-to-get-to-parts, a process the French call having a douche, is as effective and a lot more hygienic for the task in hand.

What motivates some people to adopt this beggar-your-neighbour attitude and stock up more than they need and hoard and profiteer is greed mixed with panic – a really vicious admixture.

But “always look at the bright side of life” because the greedy have been completely overshadowed by the nearly half a million who volunteered as NHS first responders and nurses to help the NHS as the epidemic peaks.

Britain does well when she gels like this, and so last Thursday night we all flocked to our balconies and windows and clapped and cheered the NHS on as they face the difficult task ahead.

There is going to be a lot sadness and bereavement, so the fact that Cyprus is temporarily inaccessible as Easter and summer loom is a minor irritation, except that it proves the old adage that you never miss something until you lose it.

Cyprus is a small island with a small population, and it should be able to contain the virus soon if everybody stays at home religiously. A curfew long enough to leave the virus with no human host to infect is the obvious answer.

Those of us of a certain age remember curfews during the emergency between 1955 -1960, which the British deployed to contain the organisation of Greek Cypriot fighters called Eoka.

The idea behind curfew is to control freedom of movement of people in the public interest as perceived by the state.

Restricting freedom of movement in the absence of a criminal conviction is not against human rights law in a public emergency provided it does not go “beyond the exigencies of the situation”.

But the right to freedom of movement within the jurisdiction is not the only right engaged in this pandemic.

With Easter round the corner, there is the right to religion to consider.

The right includes the freedom either alone or in community with others and in public or private, to manifest one’s religion or belief, in worship, teaching, practice and observance, subject to the usual claw-back provisions on the grounds of public health and public order.

How Church and State can work together to ensure that religion provides solace and comfort safely to the pious is a lot more important than people imagine.