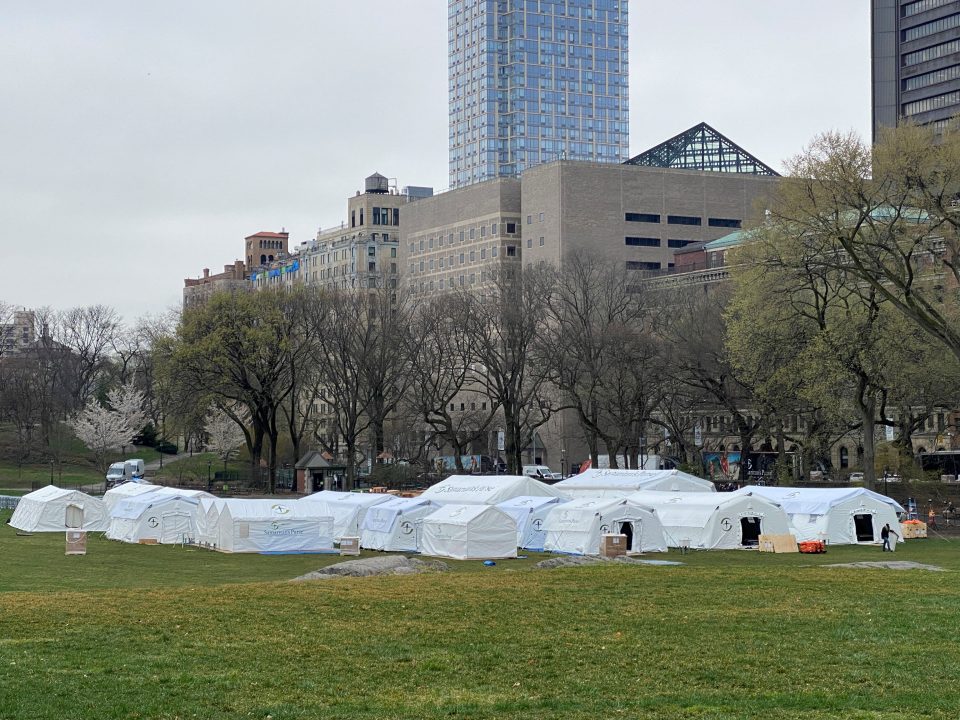 A field hospital is set up by Samaritan's Purse, a Christian humanitarian aid organization, and FEMA at the East Meadow in Central Park amid a coronavirus disease (COVID-19) outbreak in New York City, U.S., March 30, 2020. REUTERS/Aleksandra Michalska

New York Governor Andrew Cuomo called on Monday for healthcare workers elsewhere to help the state’s overwhelmed hospitals battle the coronavirus and made a plea for bipartisanship and “partnership” with U.S. President Donald Trump.

Speaking at a makeshift hospital in Manhattan preparing to receive its first patients on Monday, Cuomo sought to divert attention from any tension with Trump, with whom he has tussled in recent days over the distribution of ventilators in storage.

New York is at the epicenter of the crisis. Cuomo has called his state the “canary in the coal mine,” predicting the virus would overwhelm other states in similar ways.

He called on healthcare professionals from across the United States to come and help New York’s hospitals cope with the crisis. He promised New York healthcare workers would return the favor to other parts of the country that might need help later.

“Please come help us in New York now,” Cuomo told a briefing at the temporary hospital erected at the Jacob K. Javits Convention Center in Manhattan. “We need relief.”

The governor appealed for unity and bipartisan cooperation in the fight against the virus.

He said he agreed with Trump that dealing with the coronavirus was akin to a war, adding: “Then let’s act that way.”

Cuomo said that he took Trump’s comment that he would make a better Democratic candidate than Joe Biden as a compliment but reiterated that he had no plans to run for president.

“The president commented on a poll that said people were pleased with my leadership. I thank him for that.”

Cuomo stressed he did not want to get into a political dispute with Trump and he was not going to “rise to the bait of a political challenge.”