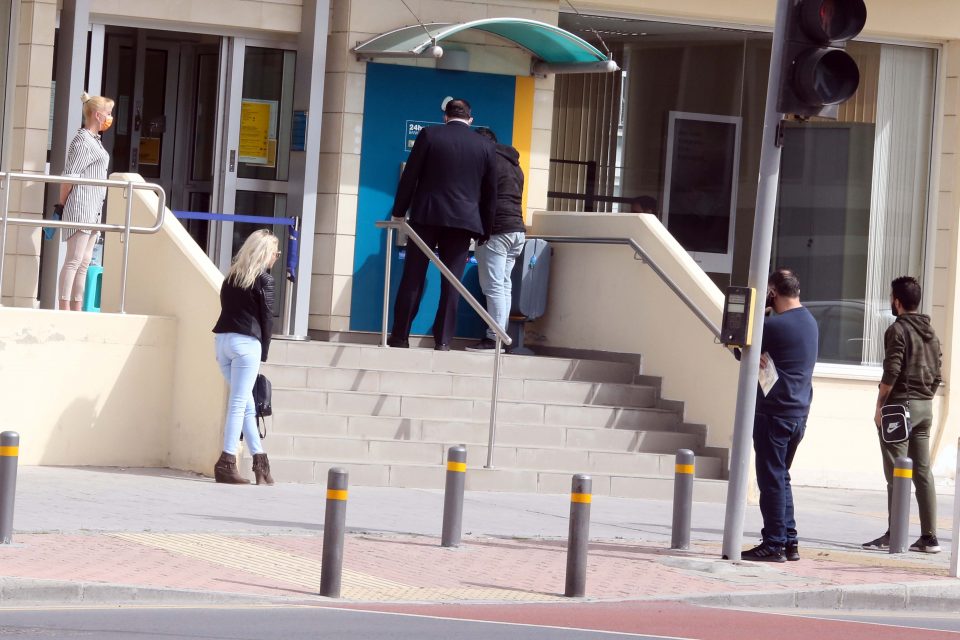 The union of bank employees, Etyk, on Tuesday called on lenders to launch procedures so that the beneficiaries of government assistance programmes to mitigate the economic fallout from the coronavirus who do not have bank accounts acquire one without having to be physically present in branches.

The call came after nine bank employees at a Bank of Cyprus branch in Ayioi Omologites, Nicosia tested positive for the virus with the union saying these people transferred the virus to their families and they, in their turn, possibly to their own workplaces.

“Such incidents must be avoided,” the union said in a circular to its members.

Stressing the importance of preventing large numbers of people going to banks, the union said that it would send its suggestions to all competent authorities in a bid to help strengthen government efforts to stop the spread of the coronavirus.

Among them is the suggestion that the “tens of thousands of beneficiaries of state aid due to coronavirus who do not have a bank account, should be able to open one without physical presence at branches.”

Given the approval of the law on the nine-month freezing of loan instalments, the union said it is expected that over 250,000 people would visit bank branches to sign the relevant documents.

It said that all customers that want to visit banks must be asked to first make appointments to avoid long lines.

The union also suggested that banks ought to issue credit cards to those who have bank accounts so they can withdraw cash from ATMs, which is a risk-free transaction for bank employees.

Beneficiaries of the employment benefits and other allowances have to submit forms including their international bank account numbers (IBAN) to which the money would be transferred. But a number, especially foreign nationals, do not have bank accounts in local banks.

There have been complaints by several people who have experienced difficulties in opening bank accounts necessary to receive their unemployment benefits.

Among the complaints the Cyprus Mail received was from a person saying they had tried three banks; one refused to open an account because they said they don’t do that at the moment, the second one required several visits to the branch but without any guarantee the application would be accepted and the third, though the procedure could be done online, said there were no clarifications on a necessary document.

The Cyprus Mail has learned that efforts have been made so banks can introduce simplified procedures for opening accounts to help those who need to get the benefits they are entitled to.

“We are in a difficult position as all front-line services, there have been mistakes but with understanding and cooperation problems will be resolved,” a source within the banking sector told the Cyprus Mail.

But problems have also been encountered on other procedures.

A couple, both of whom are in the vulnerable population groups, were asked to visit a branch after the wife’s account was blocked for not completing the three yearly account review.

“Needless to say, we have not been down to the bank,” the husband told the Cyprus Mail, arguing that some rules should be suspended until the crisis is over.

Labour minister Zeta Emilianidou said on Twitter on Tuesday that her ministry has received applications from almost 70,000 people for various assistance programmes.

Some 4,350 were received for sick benefits, 6,180 for child allowance and 6,153 from the self-employed for assistance. She said the ministry ultimately expects 350,000 applications for various support benefits and hopes the first payments can be made by April 14.

A source within the labour ministry told the Cyprus Mail that its officials were working non-stop to tackle all the problems and sort out glitches encountered due to this unprecedented situation.

But another reader said he was encountering problems with the health ministry since he has been waiting for 17 days to receive the necessary certificate from them to be able to apply for sick leave due to self-isolation. He said he followed the necessary procedure and sent them an email with his airline tickets as requested.

A spokesperson at the ministry said they had no information of any problems with the procedure, urging applicants to use their online form.