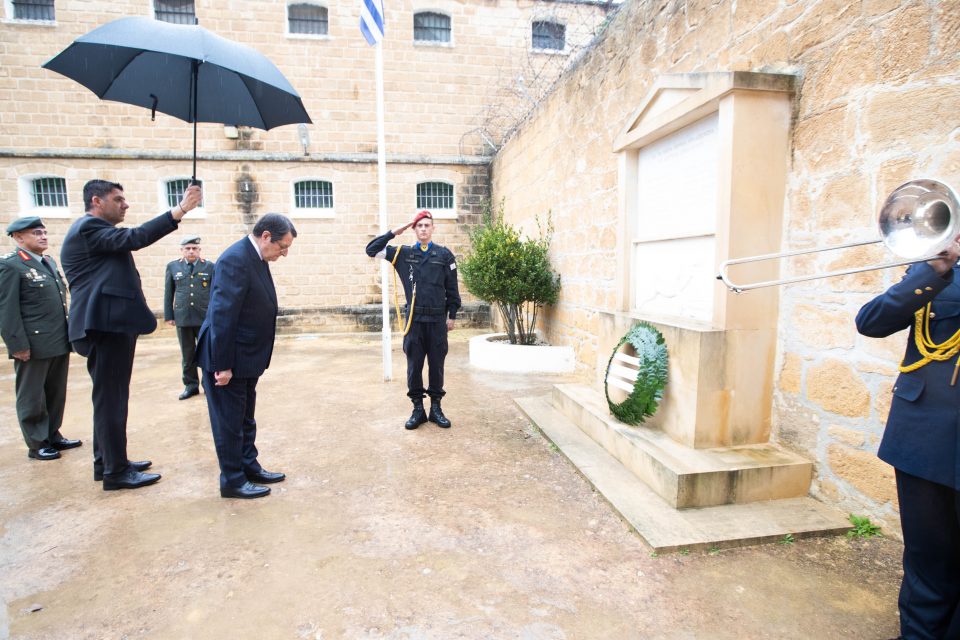 President Nicos Anastasiades on Wednesday laid a wreath at the imprisoned graves in Nicosia to mark the 65th anniversary of the launch of the Eoka struggle for independence in 1955.

A liturgy was carried out at the Ayios Ioannis cathedral at the archbishopric without attendants due to restrictions on movement as part of measures to prevent the spread of coronavirus.

Because of the restrictions the annual parades by students and veterans as well as other events usually taking place on this day were called off.

Anastasiades said in a written statement that this day, honour was due to Arhbichop Makarios, Eoka leader General Digenis and all the members of Eoka who rid Cyprus of the British yoke.

“They delivered to us a free country which we were unable to serve,” he said. He added that discord and exploitation of the national sentiment had allowed the Athens junta to carry out a treacherous act with catastrophic consequences equivalent to those of the 1922 Asia Minor tragedy.

Everyone’s goal and obligation is the freedom and reunification of the country, he said, which can only be achieved through “unity, self-respect, pragmatism and dedication to international law and the values and principles of the EU”.

Anastasiades added that April 1 was also a day for reflection and self-criticism “for all of us who bear the weight of the responsibility to deliver to the new generation what we have received from the immortal Eoka fighters.”

In a brief statement, House President Demetris Syllouris, who also laid a wreath at the imprisoned graves, said this day was dedicated to pay tribute to all those who sacrificed their lives for their homeland.

“They left us as legacy their exemplary struggle, faith and utmost love for the homeland,” Syllouris said.

According to Alpha TV, in Liopetri, several residents marked the anniversary just after midnight by standing on their balconies and rooftops with flares and torches while fireworks were set off to honour Modestos Panteli, the first Eoka fighter who died early on April 1, 1955 during an operation to cut off the power supply to a British camp outside Avgorou, in the Famagusta area. Panteli was from Liopetri.