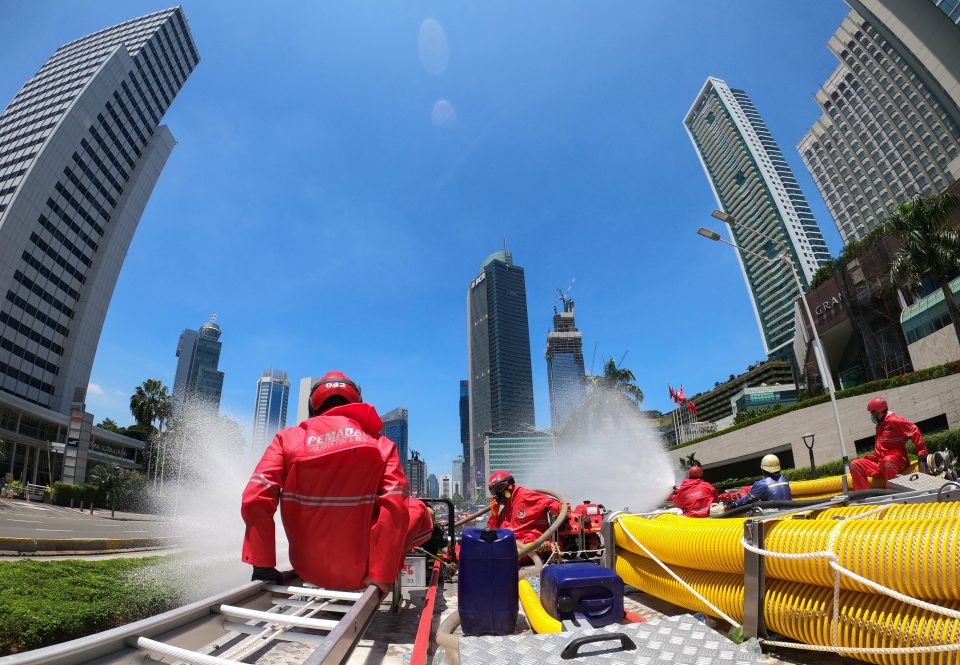 A drone dispersed clouds of disinfectant in the sky above Indonesia’s second-largest city Surabaya on Tuesday, a response to the coronavirus pandemic which is catching on around the world despite warnings from health experts.

Mass disinfections, often by workers in protective gear resembling characters from the comedy film Ghostbusters, have become a common sight — from Turkey’s Grand Bazaar to bridges in Mexico and migrant workers in India.

But the visually impressive measures taken to contain the fast-spreading virus which has killed over 42,000 people globally, have been criticised by disease specialists as a health hazard as well as a waste of time and resources.

“It’s a ridiculous image seen in many countries,” said Dale Fisher, an infectious diseases expert in Singapore who chairs the Global Outbreak Alert and Response Network coordinated by the World Health Organization.

“I don’t believe it adds anything to the response and could be toxic on people. The virus does not survive for long in the environment and people do not generally touch the ground.”

A spokesman for Surabaya’s mayor said the use of drones for disinfection was necessary in areas with confirmed cases because the virus “can be anywhere”.

Febriadhitya Prajatara compared the benzalkonium chloride disinfectant, which can cause skin irritations in high concentrations, to “soap” and said it would help “weaken the virus so it won’t enter our body”.

Coronavirus is a contagious respiratory disease that spreads through droplets from the nose or mouth via coughing or sneezing.

People can also become infected by contacting something contaminated before touching their own nose, mouth or eyes.

“Using a drone is very effective, it can disinfect everywhere, including the rooftop. If it is done manually (by workers), all they can reach is the top of the fence,” he said.

“It (spraying) is probably a cheap and visible way of doing it, but careful attention to personal and environmental hygiene is probably more effective,” said Tambyah.

Indian health workers caused outrage on Monday when they used hose pipes to douse migrant workers in the northern state of Utter Pradesh, amid fears the movement of people from cities to the countryside risked spreading the virus.

In Malaysia, under nationwide lockdown due to the virus, authorities have gone on a disinfection spree in areas with high case numbers to reduce the risk of further transmission.

But images of plumes of disinfectant spray fired from trucks into the air or from spray guns on to roads have riled health experts.

“Disinfecting roads is clearly not going to be impactful,” said Christopher Lee, a former deputy director general in Malaysia’s health ministry and an infectious disease specialist. “Waste of resources and man hours.”

Malaysia’s director-general of health Noor Hisham Abdullah said on Tuesday the government would be issuing guidelines to local authorities to make sure disinfection operations are carried out properly.

Back in Indonesia, telephone box-shaped disinfection chambers are being set up across the capital Jakarta, offering passers-by a quick blast to rid their clothes and skin of potential germs.

“I think it’s good…I feel sanitized after touching a lot of things from the bus…I feel well-protected,” said Jakarta resident Fany Anisa after exiting one of the chambers outside a bus stop in central Jakarta.

The private initiative being rolled out with the support of local authorities has been criticised by one expert who is advising the government’s virus-fighting taskforce.

“It is not good for skin, mouth and eyes, it will cause irritation,” said Wiku Adisasmito, a public health professor at the University of Indonesia.

“It would have better effect using a water cannon to disperse people and make them go home,” he said.

Coronavirus: 24 people busted by police in Larnaca apartment during curfew