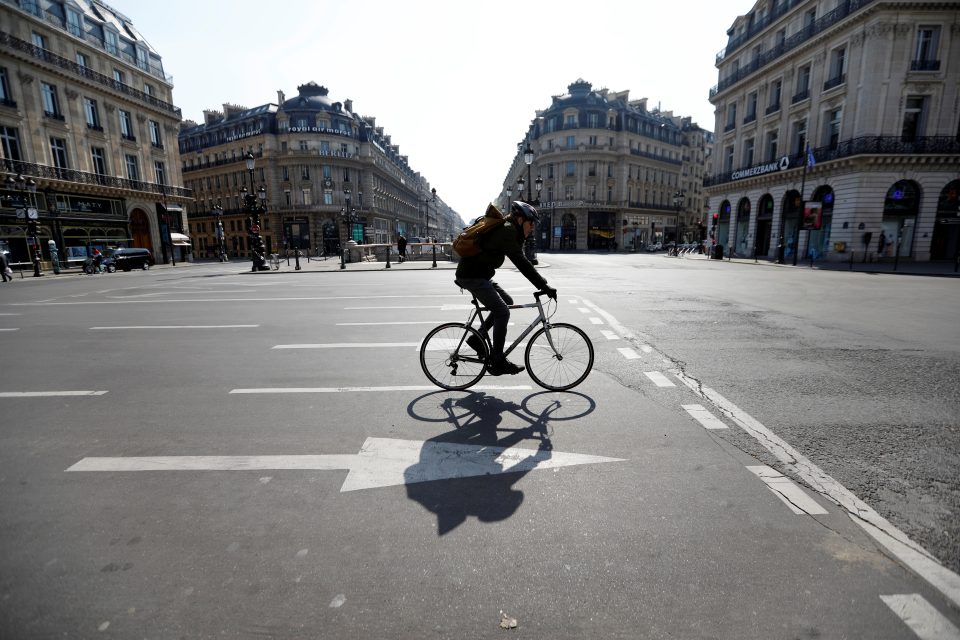 Business activity has cratered across Europe as attempts to contain the coronavirus pandemic push governments to shut down vast swathes of their economies, from shops to factories to restaurants, surveys showed on Friday.

The pandemic has infected more than a million people worldwide, paralysing economies as consumers worried about their health and job security stay indoors and rein in spending.

Governments in the euro zone have unveiled unprecedented stimulus measures and the European Central Bank has increased its asset purchase target for this year to around 1.1 trillion euros to try and mitigate the fallout.

But with businesses shuttered across the region, Purchasing Managers’ Indexes compiled by IHS Markit slumped to record lows in March and suggested it could be months before things returned to any semblance of normalcy.

A final composite PMI for the euro zone plummeted to a record low of 29.7 from February’s 51.6, lower than the flash reading of 31.4 and marking by far its biggest one-month drop since the survey began in July 1998. The 50 mark separates growth from contraction.

“It’s clear that the economy is contracting more quickly than ever before during peacetime,” said Jack Allen-Reynolds at Capital Economics.

“We think that GDP across the euro zone will fall even more quickly in Q2 than the surveys suggest. We estimate that while lockdowns are in place, output will be at least 25% below its normal level.”

IHS Markit said the data indicated the economy was already contracting at an annualised rate approaching 10% and warned worse was to come in the near future.

That was borne out by the survey as demand for new business fell at the fastest rate on record.

Like its manufacturing counterpart, activity in the bloc’s dominant service industry has also almost ground to a halt, with travel, tourism, restaurants and other leisure activities all hit hard by virus containment measures.

With the lockdowns likely to last for some time, optimism all but dried up.

The services business expectations index almost halved to a survey low of 33.5, more than 8 points below its previous record low set in November 2008, just as the euro zone debt crisis was taking shape.

European stock markets sank on Friday, erasing meagre gains for the week, as more companies flagged a hit to business from the coronavirus pandemic.

Italy and Spain have so far taken the biggest hit on the continent from the pandemic but all four of the currency union’s top economies – and Britain, which recently left the European Union – saw activity collapse.

Already teetering on recession before the coronavirus outbreak, Italy saw its services PMI dive to 17.4 while the new business index sank to 13.8. Economists now forecast a severe recession in the euro zone’s third largest economy this year.

In Spain, which has been under lockdown since March 14, the services PMI – which had been above the breakeven ’50’ mark for over six years – sank to 23.0.

“The Italian and Spanish services PMIs in March shows that the slump might worsen in April, when the government expects COVID-19 infections to peak,” said Samuel Tombs at Pantheon Macroeconomics.

Services activity in Germany, Europe’s largest economy, also collapsed and firms shed staff at the fastest rate in almost 23 years, giving a glimpse of the damage done to the job market as businesses close to limit the spread of coronavirus.

In France, where the economy is operating at two-thirds of its normal level according to estimates from the INSEE official statistics agency, its PMI for services fell to 27.4.

Britain’s economy looks set for a slump that in the short term could be deeper than during the depression of the 1930s, as a survey showed the coronavirus crisis caused a record downturn among services and manufacturing firms in March.

The composite Purchasing Managers’ Index covering the two sectors fell to 36.0 from 53.0 in February and was weaker than a preliminary ‘flash’ reading of 37.1, data firm IHS Markit and the Chartered Institute of Procurement and Supply said.

The survey data were collected between March 12 and March 27, covering the period after Prime Minister Boris Johnson ordered the closure of bars, restaurants, gyms and other services businesses to slow the coronavirus outbreak on March 20.

Britain’s dominant services industry suffered its sharpest fall by far since the survey began in 1996. Its index sank to 34.5 from February’s 53.2, and was also weaker than the March flash reading of 35.7.

Sterling weakened almost half a cent against the dollar to its lowest since March 31 after the news, which was only a bit less bleak than the equivalent euro zone survey.

Andrew Wishart, an economist at Capital Economics, said the PMIs were probably underestimating the hit.

“We are forecasting a 15% fall in GDP in Q2, a larger fall in output than in the financial crisis or the Great Depression,” he said.

“Our base case is that the recession won’t be as protracted as either of those episodes. But evidence that unemployment is shooting up despite the government response raises the risk that the recovery takes longer than we expect.”

Tim Moore, economics director at IHS Markit, said job losses had been mitigated by firms’ use of a government scheme to temporarily put staff on leave, rather than fire them.

Britain’s government has said it will pay 80% of the wages of workers who are furloughed by companies.

“However, employment levels across the service sector still dropped at the fastest pace for more than a decade, reflecting some forced redundancies and the non-replacement of departing staff amid widespread hiring freezes,” Moore said.

British Airways said on Thursday it had struck a deal with its unions to suspend more than 30,000 cabin crew and ground staff. Data on Wednesday showed around 950,000 people in the United Kingdom have applied for welfare benefits in the two weeks since Johnson shut down swathes of the economy.

The PMI survey showed the biggest drop in new work among services firms and the bleakest business expectations in more than 20 years of data collection.

Technology services were the only area to signal a rise in business activity – possibly reflecting the stay-at-home order for many people – but new workloads for tech firms dropped more quickly than at any time since 2011.

A final PMI for Britain’s manufacturing sector, published on Wednesday, showed factory output shrank at the fastest pace since the euro zone debt crisis in March.