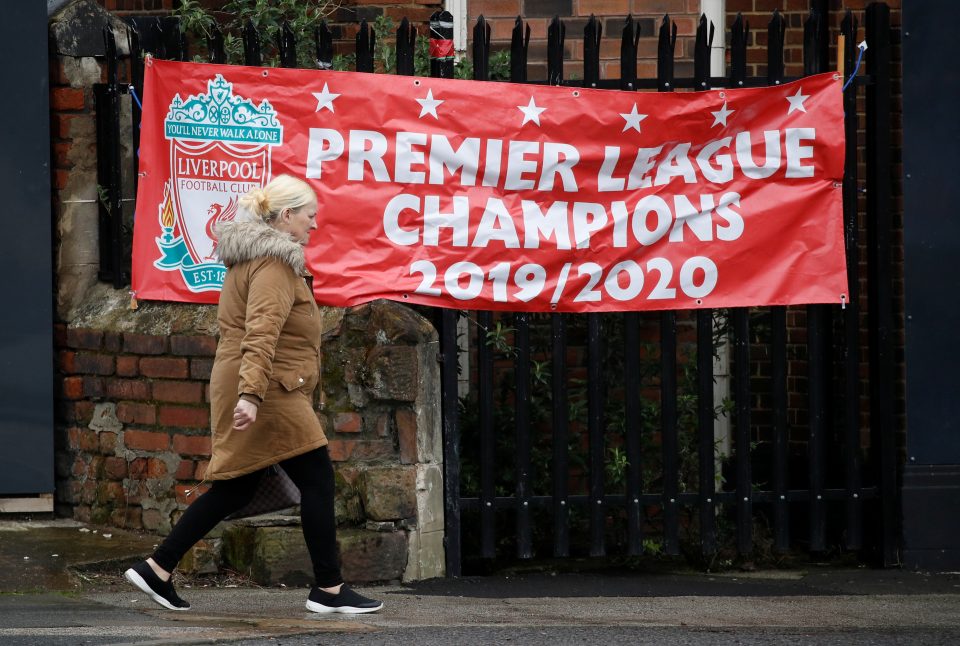 Is the banner premature despite Liverpool being 25 points ahead of second placed Manchester City?

April 3 (Reuters) – The Premier League has said its clubs will consult with their players over a proposed 30% reduction in wages and the suspended season would only resume when it was “safe and appropriate”.

The league accepted that a previous target of returning to action in early May would not now happen and said on Friday it was keeping the restart date under “constant review”.

While there has been speculation about a reduced season or even abandoning this campaign, the league said it remained their aim to complete all remaining domestic league and cup matches.

“However, any return to play will only be with the full support of Government and when medical guidance allows,” it added in a statement https://www.premierleague.com/news/1651836.

With lower league clubs facing a cash-flow crisis due to the coronavirus outbreak, the top-flight teams voted to make an advance of 125 million pounds ($153.13 million) to the Football League (EFL) and National League sides.

The EFL, which consists of the 72 professional clubs in the three divisions below the Premier League, said the cash they would receive from the top flight includes early solidarity payments, parachute payments and Academy Grants.

Much of the focus of talks between officials this week has been the issue of player compensation during the halt in play.

The league said its clubs “unanimously agreed to consult their players regarding a combination of conditional reductions and deferrals amounting to 30 percent of total annual remuneration”.

Talks with the players’ union, the PFA, will continue on Saturday, as the two sides seek an agreement on compensation during the stoppage.

The Premier League also said it was “committing 20 million pounds to support the NHS (National Health Service), communities, families and vulnerable groups during the COVID-19 pandemic.

“This includes a direct financial contribution to the NHS and funds to enable clubs to refocus their efforts and develop significant outreach programmes to help communities, including those most in need.”

Less than 24 hours after Health Minister Matt Hancock said players should take a pay cut and “play their part” in the national effort to tackle the pandemic, two moves also emerged from the players themselves.

Manchester United captain Harry Maguire asked his team mates to donate 30% of their salaries to local hospitals and was given backing by the squad.

England defender Maguire was among the 20 Premier League captains who took part in a call on Thursday evening to discuss a collective response and donation with plans now expected to be developed.

Free coronavirus testing gets underway in Paphos on Saturday