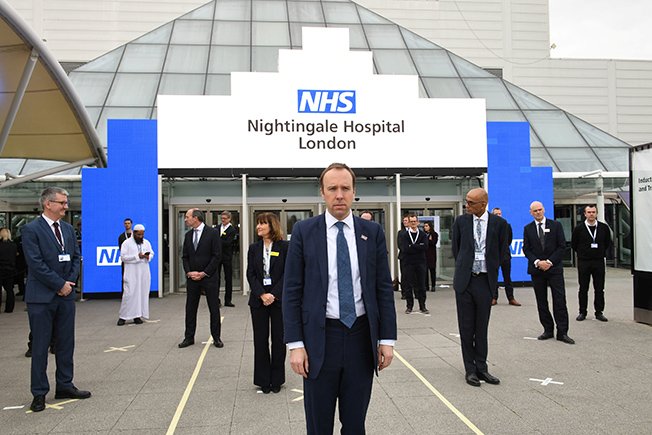 Health Secretary Matt Hancock and NHS staff stand on marks on the ground, put in place to ensure social distancing guidelines are adhered to, at the opening of the NHS Nightingale Hospital at the ExCel centre, in London

Britain’s Prince Charles opened a new hospital in London on Friday, erected to provide thousands of extra beds for patients with the coronavirus and built in just nine days in a huge conference centre.

The Nightingale Hospital, which will initially provide up to 500 beds equipped with ventilators and oxygen, will eventually be able to treat about 4,000 patients. It has been created in the Excel Exhibition Centre in London’s Docklands.

Built with help from the military, it is the first of six new temporary hospitals to be set up across the country to cope with the outbreak. So far, 2,921 people who have tested positive for COVID-19 in Britain have died.

Heir-to-the-throne Charles opened the hospital by video link from his home in Scotland in a first for the British royal family, who usually carry out such engagements in person.

He said the hospital was an example of “how the impossible could be made possible”.

“It is without doubt a spectacular and almost unbelievable feat of work,” he said. “To convert one of the largest national conference centres into a field hospital … is quite frankly incredible.”

The prince, 71, himself only came out of seven days of self-isolation this week after testing positive for the virus.

“I was one of the lucky ones to have COVID-19 relatively mildly,” he said. “But for some it will be a much harder journey. I am therefore so relieved that everyone can now have the reassurance that they will receive all the technical care they may need and every chance to return to a normal life.”

The Excel Centre, with more than 900,000 sq feet (83,000 sq metres) of exhibition space, normally hosts events for industries like defence, travel and property. During the 2012 London Olympics it was used for boxing, fencing and weightlifting.

The temporary hospitals are been built to prevent Britain’s stretched National Health Service from being overwhelmed by an influx of patients, with the number of those requiring treatment expected to peak in the next few weeks.

Health chiefs have also urgently appealed to workers without clinical qualifications to come forward to help run the Nightingale, which will require thousands of staff.

London has been the worst affected area in the country but more hospitals will open in Manchester and Birmingham to provide an extra 3,000 beds. Further facilities will also be set up in Bristol, in the southwest, and Harrogate, in the northeast.

Another temporary hospital will also be built in Glasgow in Scotland, which will initially be able to handle 300 patients

Coronavirus: binman files complaint against police for brutality during check (with video)