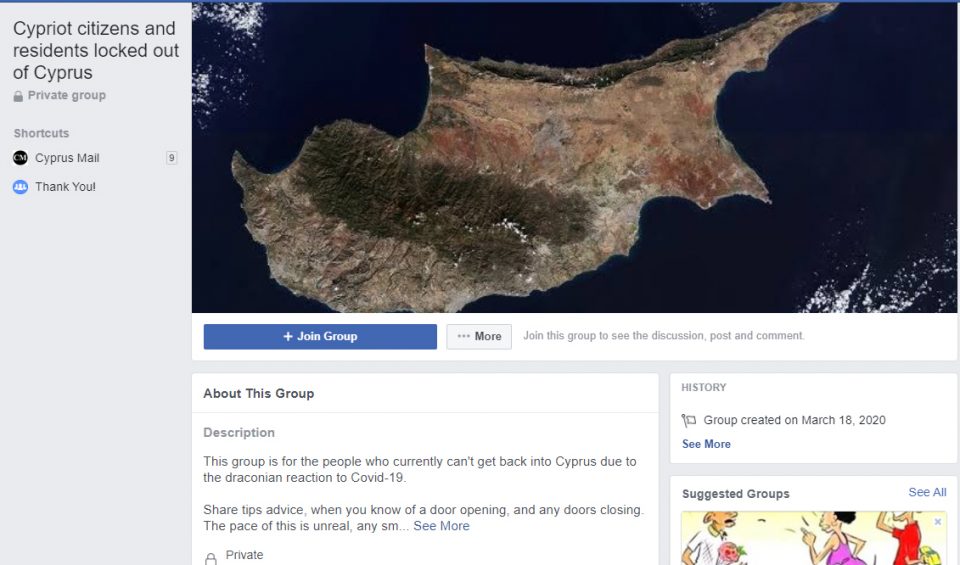 Residents of Cyprus desperate to get home have been contacting the Sunday Mail from all corners of the globe, in the wake of the coronavirus pandemic which has left many stuck abroad and feeling abandoned by the Cyprus government.

Most have already registered with the new portal set up by the foreign ministry Connect2cy, which aims to keep track of how many Cypriot citizens there are abroad as measures are being looked at to repatriate them.

“We are constantly contacting various embassies and told to register with different departments but we have been abandoned and all our efforts are in vain. All of us are willing and able to return and we also understand we have to undertake a mandatory two weeks quarantine upon our return,” one of the page founders of Cypriot citizens and residents locked out of Cyprus on Facebook told the Sunday Mail.

Costas and his wife were working in Dubai when he was offered a new job back in Cyprus and were in the the process of moving when coronavirus struck. “We couldn’t have imagined in our wildest dreams that the airports would be shut down and we be in a situation that we are in today,” he said.

The couple brought forward their move to March 25. Tickets booked, they received a last minute email that the fight was cancelled. They had already left their rented home and all of their belongings are in a Dubai warehouse.

“The world just stopped. All airlines, borders closed and now we are stuck here.”

The couple are staying with friends and are in constant communication with the authorities but haven’t managed to get home.

“If the borders don’t open soon we will be both homeless and jobless. We have seen other countries repatriating their nationals and are hoping and praying that can be our case as well.”

Costas said he has been given the go ahead to travel back to Cyprus, but has to get himself to Athens first. “The ambassador in Athens will try and put us on a charter flight back to Cyprus but doesn’t know when this may happen. I am worried as funds would be an issue because where would we stay in Athens, what would we eat, how long will this repatriation take.”

Anne is currently in Hua Hin Thailand with her husband.

Their original flight with Royal Jordanian was cancelled, and the couple secured a flight on March 24 with Aeroflot, however Cyprus then cancelled all flights to Larnaca.

They moved out of their hotel to a cheaper one and booked next available flight back on May 2. “We can’t go to the UK as it would cost us a lot more than staying here in Thailand and both our parents are in the at risk category so we couldn’t stay with them. How can the airline get us home if not allowed to land? Where do we get the money just to live?” she said.

A couple stranded in New Zealand said they have been “completely abandoned”. They were due to fly home to Cyprus on March 19.

“We phoned the Cyprus crisis centre on the 16th and were told as New Zealand wasn’t even on the list of accredited labs that we couldn’t return home so don’t try. We have been ignored by the Cypriot authorities and emails have gone unanswered,” they said.

“The only advice we could get was try and get to Athens and from there you ‘might’ get repatriated. The flights to Athens currently sit at 6k each. So this is out of the question. As far as I am aware Cyprus is the only country that has locked it’s citizens and residents out.”

Another resident, a 69-year-old with hypertension, has two certificates confirming that he is virus free from New Zealand where he was on holiday. “I have sent all my documents to the authorities in the hope that I can get home soon, this stress is not helping.”

Hundreds more are stranded in the UK, some with nowhere to stay, out of vital medication and cash, desperate to get home to Cyprus. The lucky ones are relying on people’s kindness, sleeping on friends’ sofas.

The resounding question from all is ‘Why has the Cyprus government turned its back on us?’