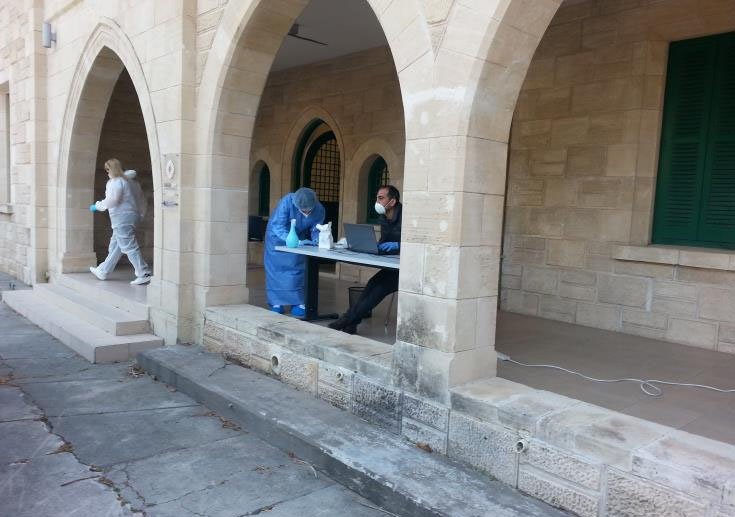 Paphos mayor Phaedonas Phaedonos said the mass testing for coronavirus taking place in the city will be a powerful tool for the ministry of health and the scientific community to understand what are the next steps.
Samples were being taken from a cross section of residents at the old district officer’s residence in a process that will go on at least until Monday.

Teams of medics have set up on the verandah at the site with timed appointments being prearranged by telephone.

Authorities are planning to test around 1,000 people in a bid to get a better picture of the situation in the area, which along with Aradippou, Larnaca, have become coronavirus hotspots.

The mayor of Chlorakas, a village in the Paphos district, Nikolas Liasidis echoed Phaedonos’ words and said the operation will be useful in the fight against the virus.

However, he reckons people are mainly following two trends, with some willing do the tests, while others are too worried to overcrowd the old district officer’s residence and catch the virus.

“I think it’s important they get tested, to protect not just themselves but other people as well,” Liasidis said.

“The residents of Chlorakas that will be tested are all part of vulnerable groups or are people who work in places such as supermarkets, bakeries, kiosks or banks, all places where people inevitably gather.

“The goal is to detect if the virus has been spread in places that are open to the public, the sooner we find out, the better,” he added.

The mayor of Emba, another village in the area, Antonakis Nikiforos said that, because of the restrictive travels measures currently in place all over Cyprus, people are afraid to get out of the house even to get tested.

“I understand people are reluctant to gather in a place where there might be others who possibly have the virus. But they need to understand that they must do the tests for the greater good,” he said.

Around 1,300 people were called to be tested and at least 1,000 are expected to come forward.

The people on the list have been separated into groups who will arrive every two hours and remain in their vehicles until the process was completed.

They should wear protective masks and those without will be supplied one by the municipality.

The list of people to be tested was compiled by the health ministry based on demographic criteria set by the epidemiological unit in an effort to have a correct picture of the situation.

A similar process started in Aradippou on Friday.

Aradippou Mayor Evangelos Evangelides said 153 samples were taken on Friday from people working on the frontline like supermarkets, pharmacies, and bakeries.

An additional 200 were expected to be taken on Saturday from individuals who are known to have come into contact with the confirmed cases and others who wanted to get tested.

Any further actions would depend on the test results, he said.

“It is not easy for a municipality the area of Aradippou to be placed in quarantine since there are farmers who go their farms every day to feed and take care of their animals,” he said.

According to the latest data provided by the health ministry’s epidemiological surveillance unit, of the 60 cases detected in the Larnaca district until the end of March, 39 were reported in Aradippou. Cases in Aradippou are mainly women, 59 per cent.