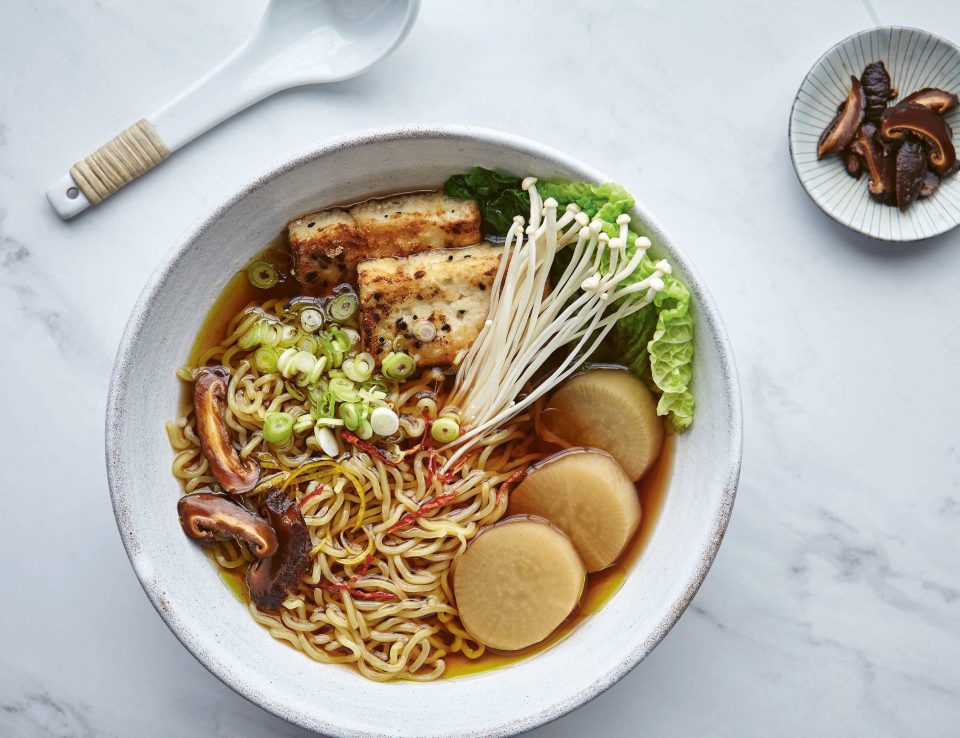 You’d think ramen wouldn’t work without a golden yolked egg, snugly suspended in the rich Japanese broth atop a tangle of noodles.

But slurping up the Ramen for Faye Wong – chef Tim Anderson’s edible ode to the vegetarian Chinese actress – it seems you can cope. Quite easily.

There are firm noodles, saffron-style strands of dried chilli, daikon, a bunch of otherworldly enoki mushrooms and a smattering of spring onions in a mushroom dashi that’s heady and deep. The egg you forget about. A slab of belly pork you realise could totally knock the balance.

It’s a swift lesson in the possibilities Japanese food offers for non-carnivores, which is the topic of Anderson’s new cookbook, Vegan Japaneasy.

A follow-up to the Wisconsin-born, London-based 35-year-old’s previous recipe collection, Japaneasy, it isn’t “strictly for vegans” but does wedge open the door on a cuisine often considered closed to those who steer clear of animal products.

“I’m not a vegan and I’m not trying to make anybody be vegan,” notes Anderson. Meaning if you want to add a gooey ramen egg, no one will stop you, but the idea is to open up Japanese food to all taste buds.

“It was an interesting challenge, but it wasn’t a big challenge,” he says.

Anderson says it can be “tough” (unless you’re staying in Japanese Buddhist temples, where cooking is often vegan), but home cooked Japanese food – the kind of fare in Vegan Japaneasy – is a completely different, much more accessible beast. And that’s arguably down to Japanese seasonings, “which are so good”.

“I realised my own home cooking was skewing more vegetarian, and because I was using delicious Japanese seasonings, you don’t miss the meat,” says Anderson. Soy sauce, miso, rice vinegar, mirin, sake – “there are just so many great ingredients in Japanese cooking that can be meaty and savoury and satisfying, but without actually containing meat.”

In the book, you’ll find carrots turned fudgy with teriyaki sauce, celeriac ‘wafu’ steaks doused in ginger, onions, soy sauce, rice vinegar and sugar, and egg-free ramen. What you won’t find so much of are meat alternatives, like tofu.

About 1/2 daikon/mooli, peeled and cut into rounds about 2.5cm thick

A few strips of lemon or yuzu zest

For the mushroom dashi:

(Makes about 350ml, plus the rehydrated mushrooms)

To make the mushroom dashi: Place the kombu and dried mushrooms in a saucepan with the water and set over a low heat. Slowly bring the water to a very low simmer – you should just see a few little bubbles breaking the surface. Remove from the heat, then leave to infuse for at least 1 hour – it will take a while for the shiitake to fully hydrate and release their flavour into the dashi. Remove the mushrooms and squeeze them out like a sponge, then pass through a sieve (fine-mesh strainer) and store in the refrigerator for up to one week. The mushrooms will keep in the refrigerator for about four days.

Put the tofu into a small bowl and pour the sake over the tofu. Mix together the cornflour and sesame seeds, then carefully dredge the tofu in the cornflour mixture, ensuring it is evenly coated. Heat the two tablespoons of oil in a non-stick frying pan (skillet) over a medium-high heat and cook for a few minutes on each side, until the tofu is golden brown and crisp. Drain on paper towels and set aside.

Puree the 100ml oil, nori and salt together in a food processor until the seaweed is completely pulverised. Leave the oil to settle while you prepare the rest of the dish.

Bring the dashi, soy sauce and mirin to the boil in a saucepan, then add the daikon rounds. Reduce the heat to a high simmer, place a lid on the pan and cook until the daikon are tender, about 10 minutes. Remove the daikon with a slotted spoon and reserve.

If you’re using shimeji mushrooms, boil them in the dashi for a couple of minutes, then remove and reserve (the enoki don’t need cooking). Keep the dashi at a low simmer with a lid on the pan.

Bring a large pan of water to the boil and blanch the cabbage for one minute, then remove with a slotted spoon and reserve. Let the water come back to the boil and cook the ramen until al dente, according to the packet instructions. Drain very well.

Divide the ramen among four deep bowls, pour over the mushroom dashi and toss the noodles with chopsticks to ensure they aren’t stuck together. Top with the cabbage, daikon, mushrooms, tofu, spring onions, chilli shreds and lemon or yuzu zest.

Finally, add a generous spoonful or two of the nori oil to the surface of the broth. Enjoy immediately, while watching Chungking Express, my favourite Faye Wong film.

Vegan Japaneasy by Tim Anderson is out now

Man remanded for setting his own house on fire (updated)