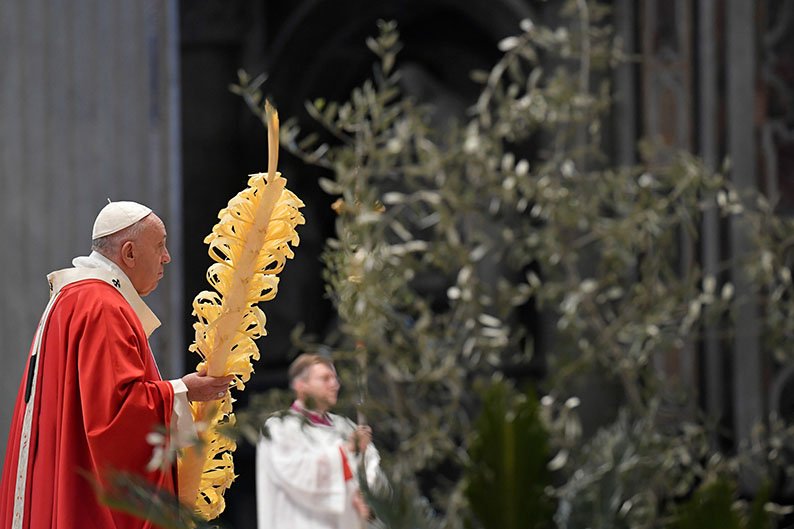 Pope Francis holds a palm branch as he leads the Palm Sunday mass in St. Peter's Basilica without public participation at the Vatican on Sunday

Pope Francis marked a surreal Palm Sunday in an empty St. Peter’s Basilica, urging people living through the coronavirus pandemic not to be so concerned with what they lack but how they can ease the suffering of others.

The service, kicking off Holy Week events leading to Easter, usually attracts tens of thousands of people to a St. Peter’s Square bedecked with olive and palm trees. The service normally includes a long procession of cardinals, priests and faithful carrying palm fronds.

This time, it was held from a secondary altar behind the main one Francis normally uses and attended by only about two dozen people, including a few aides, nuns and a scaled-down choir, all practicing social distancing.

The symbolic procession was only several metres long and a few potted olive trees were brought in.

The Mass was broadcast on television and over the internet to many millions. Churches in countries around the world were holding similar, virtual services this week because of restrictions on gatherings.

Cutting a solitary figure, Francis listened as three priests read the gospel account of Jesus’ entry into Jerusalem and being hailed as the messiah.

Holy Week marks the period when Christians commemorate events surrounding the key tenets of their faith – that Jesus was betrayed, crucified and rose from the dead.

In his sermon, Francis urged his listeners to turn to God “in the tragedy of a pandemic, in the face of the many false securities that have now crumbled, in the face of so many hopes betrayed, in the sense of abandonment that weighs upon our hearts”.

The pandemic could help transform fear into service, he said.

The Vatican has been in its own lockdown, mostly mirroring that in Italy, where more than 15,500 people have died since the outbreak of the new coronavirus epidemic in northern Italy on Feb. 21.

There are nearly 125,000 cases of the virus in Italy and seven in the Vatican. The pope and his closest aides have tested negative.

“The tragedy we are experiencing summons us to take seriously the things that are serious, and not to be caught up in those that matter less; to rediscover that life is of no use if not used to serve others. For life is measured by love,” Francis said on Sunday.

“May we reach out to those who are suffering and those most in need. May we not be concerned about what we lack, but what good we can do for others,” he said.

All of the pope’s Holy Week services, which normally draw tens of thousands of pilgrims and tourists to Rome, will take place in the empty basilica in a scaled-down version.

The Good Friday Via Crucis (Way of the Cross) procession, which normally takes place around Rome’s Colosseum, will instead be held in the relatively small atrium of the basilica.