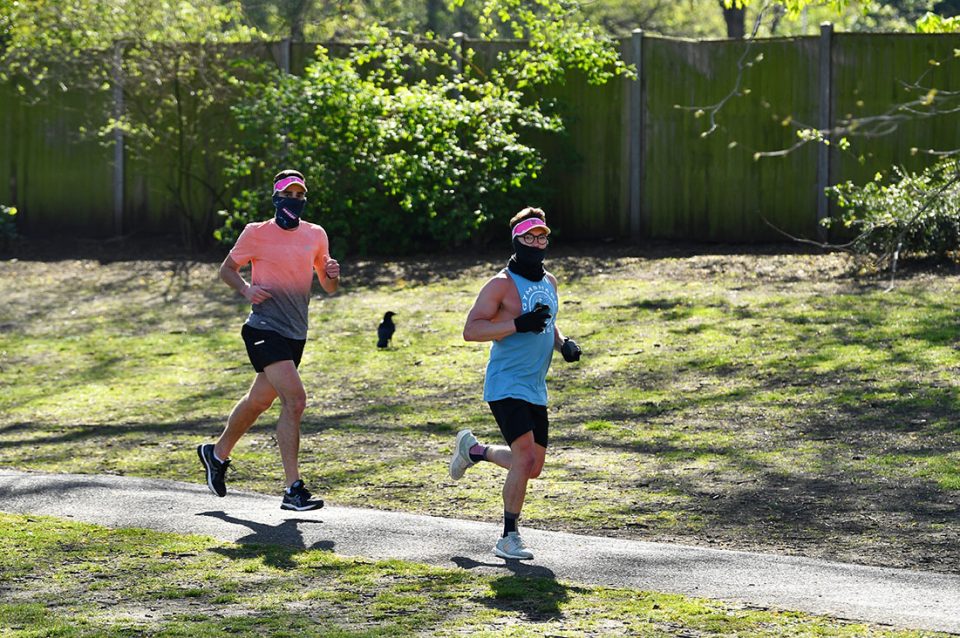 People wearing a mask run in Battersea Park, in London on Sunday

The Health Secretary Matt Hancock said earlier in the day that the govenrment will have to impose further restrictions on outdoor exercise if people flout lockdown rules designed to curb transmission of the coronavirus,

“I don’t want to have to take away exercise as a reason to leave home…if too many people are not following the rules,” he told the BBC’s Andrew Marr programme.

“At the moment the vast majority of people are. But people should not break the rules because that would mean that the virus spreads more and we then might have to take further action.”

Other European countries such as Italy and France have imposed tougher restrictions on people leaving their homes.

There were fears that warm spring weather on Sunday could encourage Britons to head to parks. London’s Lambeth Council closed Brockwell Park on Sunday after it said many people had sunbathed or gathered in large groups there on Saturday.

Hancock said it was “unbelievable” to see a small minority flouting the government’s advice to maintain social-distancing.

If people did not follow the rules, which allow people to walk, run or cycle outdoors once a day but not sunbathe, he said he would have to ban exercise of all forms outside the home.

He said the timetable to ease restrictions – the lockdown exit strategy – could only be agreed once the spread of the coronavirus had been brought under control.

“What matters is people do follow the rules because then we will be able to make some progress,” he told Sky News. “Once we’ve flattened the curve in coronavirus cases we will be able to set out next steps. We are not there yet.”

Neil Ferguson, a professor at Imperial College in London who has helped shape the government’s response, said the epidemic in Britain was expected to plateau in the next seven to 10 days.

“What’s critically important then is how quickly case numbers go down: do we see a long flat peak or do we, as we hope, see a much faster decline, and that really depends on how effective the current measures are,” he told the BBC’s Marr.

He said predictions of how many people could die in Britain from the COVID-19 respiratory disease were subject to a degree of uncertainty, but he currently thought fatalities could be “anywhere between about 7,000 or so up to a little over 20,000”.

Britain’s death toll rose to 4,313 on Saturday after 708 people died in the previous 24 hours, the highest daily rise so far.

Ferguson said cases had to come down to a low point before measures such as increased testing and contact tracing could replace some of the lockdown restrictions.

British media on Sunday reported clashes at the top of government over the exit strategy, with finance minister Rishi Sunak pushing for a path to be mapped out towards lifting the restrictions to help limit damage to the economy.

Hancock denied there was any rift. “We are working very closely together, and what matters is that we can get out of this as fast as possible,” he told Sky News.