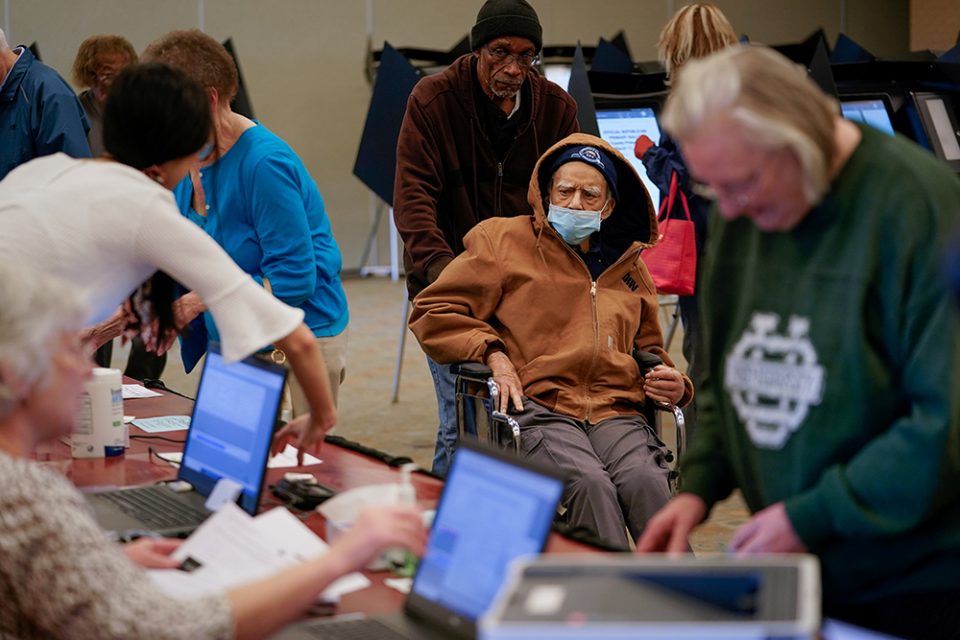 Robert Harrison, 96, arrives to vote while wearing a mask to prevent exposure to novel coronavirus, in Hamilton, Ohio, U.S.,

There may not be enough time, money or political will to make it happen by November report John Whitesides and Jarrett Renshaw

U.S. election officials looking to construct a safe voting system in a worsening coronavirus pandemic are confronting a grim reality: there may not be enough time, money or political will to make it happen by the November election.

The possibility the pandemic could last into the fall, or flare again as millions of voters are set to choose the nation’s next president, has state and local officials scrambling for alternatives to help keep voters safe.

The most-discussed proposals are to make mail-in voting available to all eligible voters nationwide, and to expand early in-person voting to limit the crowds on Election Day.

But election officials say those changes will be costly and complex in a country where traditional voting remains ingrained. About six of every 10 ballots were cast in person on Election Day in 2016, Census data shows.

Democrats fell far short in their effort to include at least $2 billion to help virus-proof the November elections as part of a $2.2-trillion coronavirus stimulus bill that was passed by the U.S. Senate on Wednesday. The package, which still must be approved by the House, devotes $400 million to bolster vote by mail and early voting, expand facilities and hire more poll workers.

“Congress failed to include sufficient, urgently needed funds in the stimulus to help states run elections in a time of pandemic,” said Michael Waldman, president of the Brennan Center for Justice at the New York University School of Law. “This could wreak havoc in November.”

Republicans opposed to spending big on balloting changes viewed it as an attempt by Democrats to impose a one-size-fits-all solution on states. Democrats said the price tag reflected the enormity of the task of safeguarding the vote during a pandemic.

Benjamin Hovland, chairman of the U.S. Election Assistance Commission, which provides resources and information to election officials nationwide, said the change requires planning – and time is running out.

“You can’t just flip a switch and vote by mail, this is a very involved process,” Hovland said. “A lot of what is possible in November will be determined now.”

Some officials in both parties still worry they could lose out in a nationwide vote-by-mail system.

Democrats fear it could disenfranchise minorities and low-income voters who tend to move more frequently or lack reliable access to mail service. Republicans cite concerns about voter fraud, and they worry that older voters confused by a new voting system and rural residents with slow mail delivery could be left out.

Fears about the outbreak, which has now infected more than 85,000 Americans and killed over 1,200, have started to affect Americans’ intentions to vote. In a Reuters/Ipsos poll taken March 18-24, 63% of adults questioned said they were “completely certain” to vote in November. But that figure dropped to 56% when the respondents were asked to project their behavior if coronavirus were still a factor on Election Day.

“If nothing changes by November, there will be a lot of voters who are disenfranchised,” said Sylvia Albert, voting and elections director for good-government watchdog Common Cause.

The health crisis has already upended the Democratic race to pick a challenger to face incumbent Republican President Donald Trump.

Three states scheduled to proceed with their April 4 Democratic nominating contests – Wyoming, Hawaii and Alaska – have scrapped in-person voting entirely and will only permit voting by mail. Ohio and at least eight other states pushed their primaries back to May or June.

Postponement looks unlikely for the November presidential election, which is set by law and would require action by Congress to move.

“The election is going to happen in November, so we have to put the procedures in place now to make sure it happens safely and fairly,” said Jonathan Diaz, legal counsel for voting rights at the Washington-based Campaign Legal Center.

Introducing a vote-by-mail system in new locales will require election officials to pay for new paper ballots and thick security envelopes, and to buy expensive new machines to sort and tabulate them.

But one of the biggest challenges will be familiarizing people with a new way of voting in a very short time, said Tina Barton, the city clerk and chief elections official in Rochester Hills, Michigan.

“It’s going to take a massive education campaign not only to train all your clerks on a new process but also to educate voters,” Barton said.

The Brennan Center estimated the cost of ensuring vote-by-mail was available for all voters could be up to $1.4 billion, with postage alone costing $600 million.

Hovland of the U.S. Election Assistance Commission said he has gotten so many questions from election administrators about making the transition that he recorded a video conference with local officials in Washington, California and Utah who supervise mail-in ballot systems so they could share their tips with others.

But rules differ from state to state. Some states provide postage-paid envelopes. Others do not. Most allow no-excuse absentee voting. Others require a specific reason for not showing up at the polls, such as an illness or travel.

Connecticut Secretary of State Denise Merrill said the state’s Constitution allows absentee voting only in limited circumstances; a pandemic is not one of them.

Merrill has urged Connecticut’s Democratic Governor Ned Lamont to issue an executive order permitting those worried about going to the polls during the outbreak to obtain absentee ballots. He hasn’t announced a decision.

“We’re stuck,” Merrill said. “We have unique problems, and I think it would be extremely difficult to get this implemented by the fall.”

The proposed changes to the nation’s voting system ahead of November’s election have triggered partisan suspicions among both Democrats and Republicans.

In Pennsylvania, a key presidential battleground, a local Democratic Party official said he worried widespread use of mail-in balloting might lower participation among low- to moderate-income Democrats who are more transient.

“There’s no doubt, here at least, that it would favor Republicans, who are more affluent and more stable in their lives,” said Ed Hozza, Democratic chairman in Pennsylvania’s Lehigh County.

Voting rights advocates in Arizona, which Democrats have targeted as a potential swing state, worry voting by mail could disenfranchise Native Americans who live on reservations inside the state’s boundaries.

People who live on tribal lands often lack a traditional street address. Just one-quarter of Native Americans in Arizona have a postal service address, and many speakers of non-written tribal languages rely on assistance from translators at in-person polling locations, said Alex Gulotta, the Arizona state director of All Voting is Local, a voter protection group.

“The solution can’t be simplistic — it needs to have some complexity to meet the needs of constituent groups that would be harmed by all-mail voting,” he said.

Arizona Secretary of State Katie Hobbs, a Democrat, has urged Arizona lawmakers to authorize “all-mail” elections this year, a method the state normally uses only in small jurisdictional elections.

Republicans, too, have concerns mail-in balloting might depress turnout among one of their most reliable voting blocs: rural Americans. Mail service is spotty in some far-flung parts of the country, making it potentially harder for rural-dwellers to participate.

Republican leaders traditionally have resisted more lenient rules on casting ballots. Many cite the potential for voter fraud, a concern that election experts say is not supported by evidence. Still, some Republicans have moved to loosen the restrictions on voting by mail in response to the coronavirus outbreak.

The danger the virus poses to voters of all stripes has increased pressure on officials to take action, said Trevor Potter, a Republican former chairman of the Federal Election Commission and president of the Campaign Legal Center.

“This is a non-partisan, non-discriminatory problem that faces both sides,” Potter said.

Coronavirus: babies ‘not in danger’ at children’s hospital