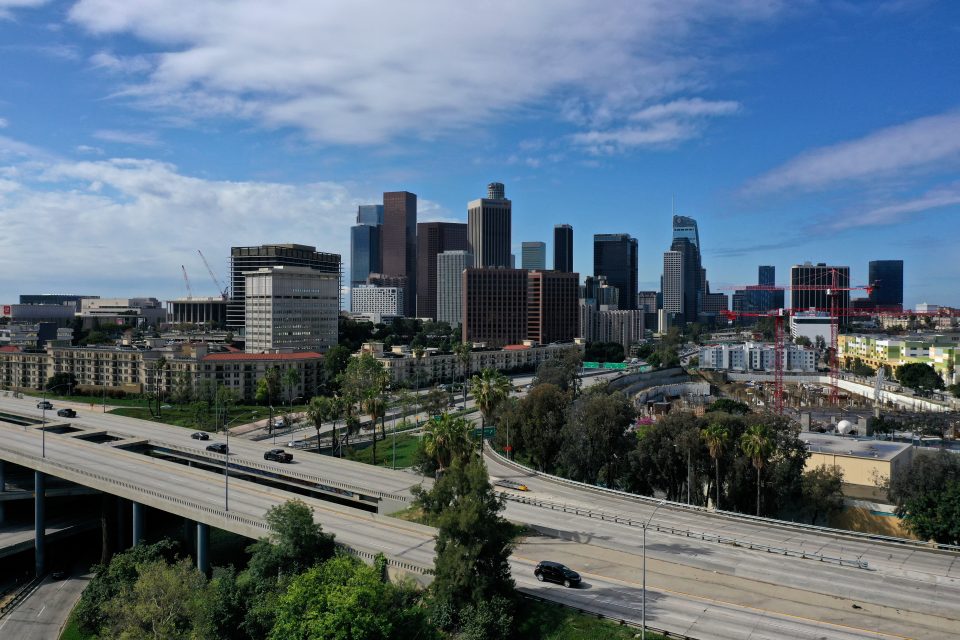 Downtown freeways are empty of traffic as the spread of the coronavirus disease (COVID-19) continues, in Los Angeles, California, U.S., April 7, 2020. REUTERS/Lucy Nicholson

Even as medical teams struggled to save an onslaught of gravely ill coronavirus patients and deaths hit new highs, the number of COVID-19 hospitalizations seemed to be leveling off in New York state, the U.S. epicenter of the pandemic, Governor Andrew Cuomo said on Tuesday.

New York was one of several states, along with the nation as a whole, to post their highest daily loss of life from COVID-19, the highly contagious respiratory disease caused by the virus. A staggering 731 fatalities were reported in Cuomo’s state alone.

But early statistical signs the crisis might be peaking provided little comfort to weary doctors and nurses on the front lines of the outbreak, as hospital emergency rooms and intensive care units overflowing with COVID-19 patients.

“People are just so incredibly sick … incredibly sick in a way that I’ve never experienced or seen before,” said Jacqueline Callahan, 33, a New York City nurse who spoke to Reuters on condition she not identify the hospital where she works.

“So every day is, honestly, the hardest day,” she said. “You just don’t know how it’s going to change, and you just hope it keeps getting better, but – you know – we haven’t turned that corner fully yet.”

In Wisconsin, voters on Tuesday braved the coronavirus outbreak to wait 6 feet (1.8 m) apart in lines for hours and cast ballots in the state’s presidential primary and local elections.

For the United States, the tally of known coronavirus infections approached 400,000 on Tuesday, with the number of deaths surpassing 12,700 in a record single-day jump of more than 1,800 nationwide.

New York state accounted for more than a third of U.S. confirmed coronavirus cases to date, and nearly half the cumulative death toll – 5,489 as of Tuesday.

But Cuomo said the rising number of deaths was a “lagging indicator” coming days or weeks after the onset of infections.

The governors of Illinois and Louisiana – two other hot spots in the U.S. pandemic – likewise paired reports of record jumps in COVID-19 deaths with data suggesting the contagion may be reaching a plateau.

The messages seemed calibrated to convey a sense of hope while urging the public to abide strictly by stay-at-home orders imposed by governors of 42 states.

“Let’s not get complacent,” Cuomo told a news conference. “Social distancing is working. … That’s why you see those numbers coming down.”

Across the country, California Governor Gavin Newsom said the infection curve in his state – the first to impose stay-at-home orders – was “bending but it’s also stretching,” with the virus outbreak there expected to peak in mid- to late May.

“The curve continues to rise, but now it is slower,” he told a news briefing.

In another glimmer of good news, the U.S. surgeon general, Jerome Adams, said on Tuesday the pandemic may end up killing fewer Americans than the range of 100,000 to 240,000 projected earlier by the U.S. Centers for Disease Control and Prevention.

The latest research model from the University of Washington – one of several cited by leading health authorities – has forecast U.S. coronavirus deaths totaling fewer than 82,000 by Aug. 4.

The steps to curb the pandemic have hammered the U.S. economy, closing many businesses while unemployment soars.

Trump reiterated at a White House briefing he wanted to reopen the U.S. economy soon.

“We want to get it open soon, that’s why I think maybe we’re getting to the very top of the curve,” Trump said.

New York City Mayor Bill de Blasio, whose city is the focal point of the state’s outbreak, said it was too early to declare a corner had been turned but cited encouraging developments.

“The number of people showing up in our hospitals who need a ventilator – that situation has improved a bit in recent days,” he said.

That will come as some relief to Tomas Flores, a grocery worker at Northgate Market in Los Angeles, who like many delivery workers, grocery staff and cleaners, doesn’t have a stay-at-home option.

“I do worry,” Flores said, hours before Garcetti’s order.

“I ask God to watch over me when I leave my home and to take care of me at work, but I feel the need to come because many families depend on us,” he said. “Not only my family depends on me because I must earn money to bring home, but many people depend on the work that I do.”

Coronavirus: Movement violations down to 76 overnight on Tuesday