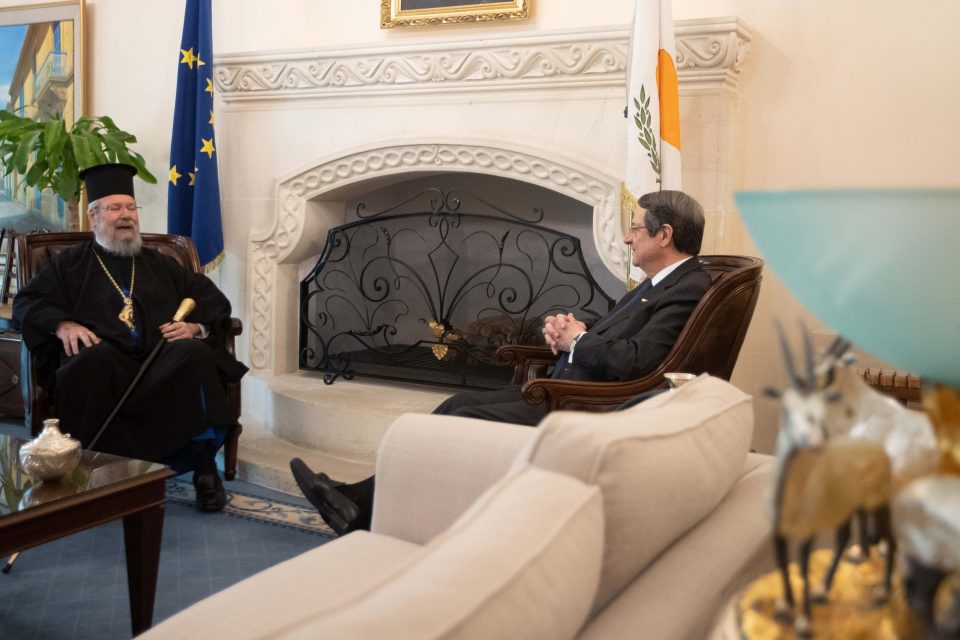 The Archbishop with the president on Thursday

Archbishop Chrysostomos on Thursday gave reassurance that the Church would make sure that all measures aimed at curbing the spread of coronavirus would be followed to the letter during the Easter holidays.

The Church primate was received by President Nicos Anastasiades at the presidential palace earlier on Thursday where the latter briefed the archbishop on the new measures decided by cabinet to tackle the coronavirus pandemic, also ahead of the Easter holidays, government spokesman Kyriacos Kousios said after the meeting.

“The archbishop reassured the president that the Church would make sure of the full implementation of the measures, to curb the spread of the coronavirus,” Kousios said in a written statement.

He also said that they agreed that the Church was to decide in which churches the Holy Week services would be carried out without a congregation present.

They also agreed that the decision for the possible repetition of the main Easter service at a later date, to allow people to attend if conditions allowed, lies solely with the Church, Kousios said.

Both the president and the archbishop already announced that the church services during Holy Week next week would take place behind closed doors.

During his address on Wednesday evening on the extension of all measures currently in place until the end of this month, Anastasiades quoted the Ecumenical Patriarch who said “it isn’t faith which is in danger but the faithful. I would say that today it’s not the way of life which is danger but our life itself,” he said.

The president acknowledged that the measures would cause more pain during Easter days, when everyone would have celebrated with their loved ones.

“What I want is that when we meet at the next celebration, none of our children will be missing, none of the parents, no granddad or grandmother,” he said.

English football fails its biggest test – will the public ever forgive?