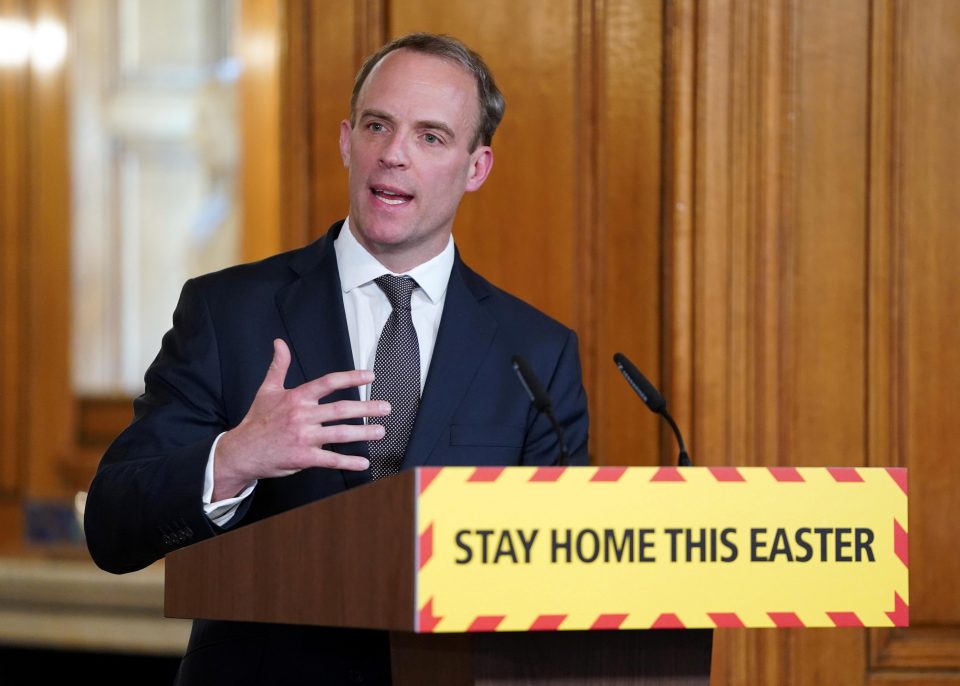 Foreign Secretary Dominic Raab said on Thursday Britain had not yet reached the peak of the coronavirus epidemic and that it was too early to lift the lockdown.

Experts were still gathering data on the lockdown and it was too early to say conclusively whether it was working, he told reporters.

Raab, standing in for Prime Minister Boris Johnson, told reporters he did not expect to be able to say more on the lockdown until late next week.

He was speaking as the coronavirus death toll in English hospitals rose 765 to 7,248, the health service said on Thursday.

Of the 765 patients, 43 (aged between 33 and 99) had no known underlying health condition.
The figures were earlier reported by The Sun newspaper before the official release. The National Health Service (NHS) had no immediate explanation how that had come about.

UK-wide numbers have not yet been released for the latest 24 hours. They would only show the deaths from Covid-19 in hospitals and the true toll is likely to be much higher due to deaths outside hospitals.

British scientists advising the government have said the country would be doing well if the total death toll came in below 20,000.

Raab also acknowledged that those working on the front lines to tackle coronavirus will be formally recognised.

However, the foreign secretary stopped short of confirming whether or not NHS staff would be given a pay rise.

Raab was asked during the government’s daily briefing whether health staff deserved a rise.
He said: “There will be a moment when we look at how we formally recognise all of those on the front line who have done so much to pull us through this very difficult period for our country.”

Raab also urged people across the country to consider those working on the front lines if they are considering not following the government’s measures ahead of the bank holiday.

He said: “Above all, as we go into this long bank holiday weekend, I think people should think very long and hard, not just about the guidance and the importance of keeping it up, but about what happens to those on the NHS front line who are doing a heroic job, if people in large numbers don’t comply with those rules.

“I would urge everyone just to take a moment before they do anything, however warm it is, however great the temptation, just to think about the sacrifices those on the front line, particularly in our NHS, are making.”

There was no mass Easter getaway on Thursday but some people did travel to tourist hotspots in contravention of lockdown rules.

Road traffic levels were similar to those seen in the past week, indicating that most people stayed at home on what is traditionally one of the busiest days of the year for leisure travel.
Analysis by the PA news agency of data published by satellite navigation company TomTom showed there was no spike in congestion in cities such as Belfast, Cardiff, Edinburgh, London and Manchester.

Audit boss calls for checks and balances on bank-loan guarantees

Coronavirus: police will be on high alert over Easter to catch movement violators