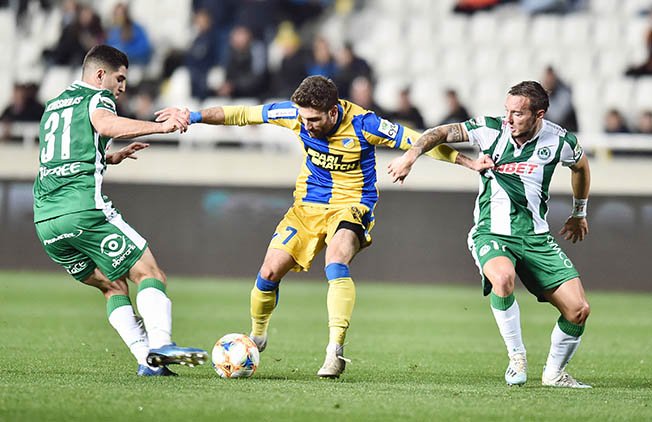 Cyprus Sports Organisation President Andreas Michaelides says he is looking for a potential return to limited or restricted training towards the end of May with a likely return to full training by the middle of June. No hard date has been proposed for the recommencing of games

There is nothing more stultifying and inhibiting than a set of ever-changing requirements, continuously broken down and reconstituted into different shapes, desperately trying to accommodate a tumultuous situation.

This is where football is at the moment. As laboured as it sounds, the ball is quite literally stuck in the mud.

We know that everyone involved with the sport in a professional capacity would ideally prefer if the season somehow achieves a form of managed completion. However, the word ‘managed’ does an inordinate amount of heavy lifting here.

The Premier League, for instance, has mooted the idea of a tournament-style end to the season. No fans, teams isolated together in a World Cup-like camp until all games have been played. There would be a set of games every day to expedite completion, with a proposed three-day break for each club.

It goes without saying that this poses more questions and challenges than some would like to admit. Can player health truly be safeguarded? Even without fans, aren’t there already too many people involved for such a logistical undertaking to go ahead without issues? Will players and team staff agree to be away from their families for such a prolonged period of time?

You can see why officials are trying to think of something, anything, to salvage the season.
In Spain, La Liga president Javier Tebas said that clubs are estimated to lose close to one billion euros, including unplayed European competition games, if the season were to be scrapped.

If games are concluded behind closed doors, La Liga clubs will lose roughly 300 million euros. The best-case scenario, where the season recommences as normal, would see clubs lose 150 million euros.

We haven’t even delved into the legal aspect of this quagmire yet. Player contracts tend to expire on June 30 of each calendar year. This includes loan agreements. This causes tremendous complexities in how any season extension is handled.

For example, Manchester United’s Odion Ighalo is on loan from Chinese club Shanghai Shenhua. The Chinese Super League has been delayed, but the club wants Ighalo back by the time the season begins.

Thus, a club is denied the contribution of a player they would normally be able to rely on after having paid the fee required to secure his loan.

Then there’s the issue of players who have already agreed to join another club. What if their new club would pay them considerably more than their current employer does? Any delay or unilateral extension would constitute a loss of earnings.

Most recently, Fifa issued a set of guidelines which include the recommendation for contract extensions and transfer delays. However, the wording used hints at a limit of what they can do.
The transfer window will be pushed back and that’s certainly within their remit. However, things are somewhat different when it comes to contracts and any subsequent changes to them.

Each league’s domestic employment law is different. Unilateral contract extensions may be subject to a different set of laws and other regulatory aspects. And then there’s the issue of setting a precedent. Trying to predict how this particular aspect gets resolved is practically impossible.

In Cyprus, the football association is in discussions with the Ministry of Finance. The former has submitted a set of proposals which Minister Constantinos Petrides will look into before any further discussions take place. The minister added that clubs qualify for the ‘Suspended Operations Plan’, one of the measures enacted by the government in response to the coronavirus. In this instance, players qualify for unemployment allowance for as long as the game is suspended.

Meanwhile, Cyprus Sports Organisation President Andreas Michaelides has intimated that they are keeping an eye on other leagues and how they’re handling the situation. What Uefa and Fifa decide to do is also pivotal.

Michaelides added that Cyprus is looking for a potential return to limited or restricted training towards the end of May with a likely return to full training by the middle of June. No hard date has been proposed for the recommencing of games.

There have been calls for both the CFA and CSO to take a more active part in how the dire ramifications of the outbreak can be curtailed. Both organisations are known to have a monetary buffer, as well as the ability to borrow, which might facilitate some form of financial outreach where needed.

Clubs in lower divisions are of particular concern here, with some already having been in a struggle for survival before the pandemic’s effects came into the picture. However, smaller monetary contributions, gifted or loaned, would go a long way to keep some of them afloat until next season.

Football is reflecting the outside world in its wait-and-see handling of the situation. It would be an aberration if it wasn’t. While eyes inevitably drift towards balance sheets, everyone fully understands that risking people’s safety is entirely out of the question. With so many moving parts involved it would be incredibly audacious to attempt a forecast on how things get settled.

What we do know is that the more things stay in flux the harder it is to formulate an appropriate plan of action. While a prolonged period of iterative analysis is prudent, it may inevitably lead the sport past the point of no return.

Clubs may flicker out of existence, employment law in football might irrevocably change, and this season may be scratched from the records, consigned to history as a victim of the pandemic.