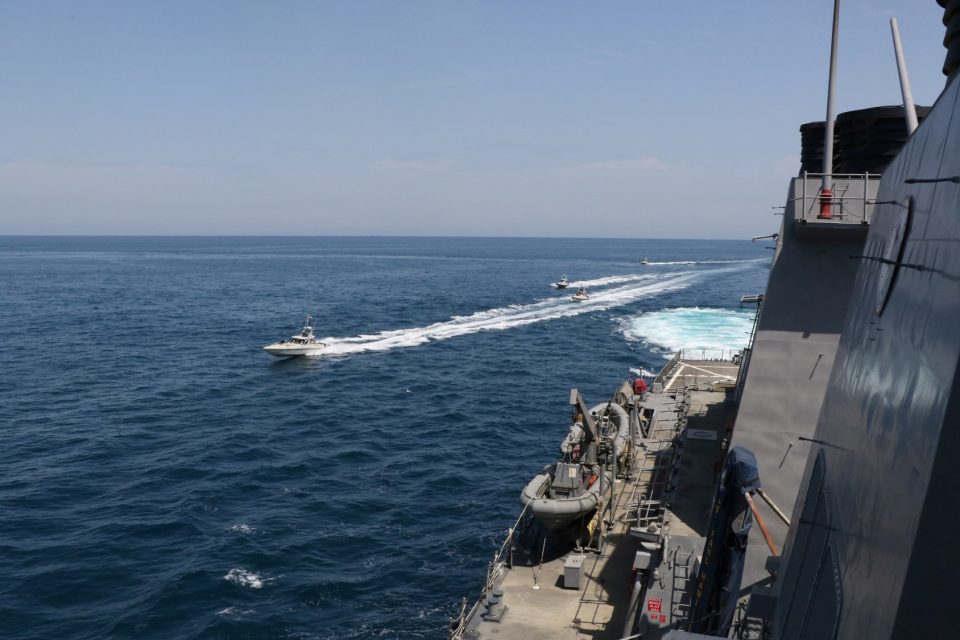 File photo: Four Iranian Islamic Revolutionary Guard Corps Navy (IRGCN) vessels, some of several to maneuver in what the U.S. Navy says are "unsafe and unprofessional actions against U.S. Military ships by crossing the ships’ bows and sterns at close range" is seen next to the guided-missile destroyer USS Paul Hamilton in the Gulf

While such interactions had occurred occasionally a few years ago, they had stopped, and this incident comes at a time of increased tensions between the two countries.

According to the statement, the Iranian vessels approached six U.S. military ships while they were conducting integration operations with Army helicopters in international waters.

At one point, the Iranian vessels came within 10 yards of the U.S. Coast Guard cutter Maui.

The Iranian ships left after about an hour, the statement added.

“The IRGCN’s dangerous and provocative actions increased the risk of miscalculation and collision, (and) were not in accordance with the internationally recognized Convention on the International Regulations for Preventing Collisions at Sea,” the U.S. military’s statement said.

U.S. Secretary of State Mike Pompeo, asked in a Fox News interview whether he had discussed the incident with the Pentagon, said: “We’ve talked as a team. … We’re evaluating how best to respond and how best to communicate our displeasure with what … took place.”

Close interactions with Iranian military vessels were not uncommon in 2016 and 2017. On several occasions, U.S. Navy ships fired warning shots at Iranian vessels when they got too close.

Iran retaliated on Jan. 8 with a rocket attack on Iraq’s Ain al-Asad base where U.S. forces were stationed. No U.S. troops were killed or faced immediate bodily injury, but more than 100 were later diagnosed with traumatic brain injury.

Earlier this month President Donald Trump said that Iran or its proxies planned a sneak attack on U.S. targets in Iraq, and warned they would pay a “very heavy price.”

Maritime security sources said on Wednesday that a Hong Kong-flagged tanker was briefly detained in Iran after armed Iranian guards in speedboats directed the vessel into its waters while it was sailing through the Gulf of Oman.

The sources said the SC Taipei chemical tanker had been sailing in international waters on Tuesday when it was stopped.