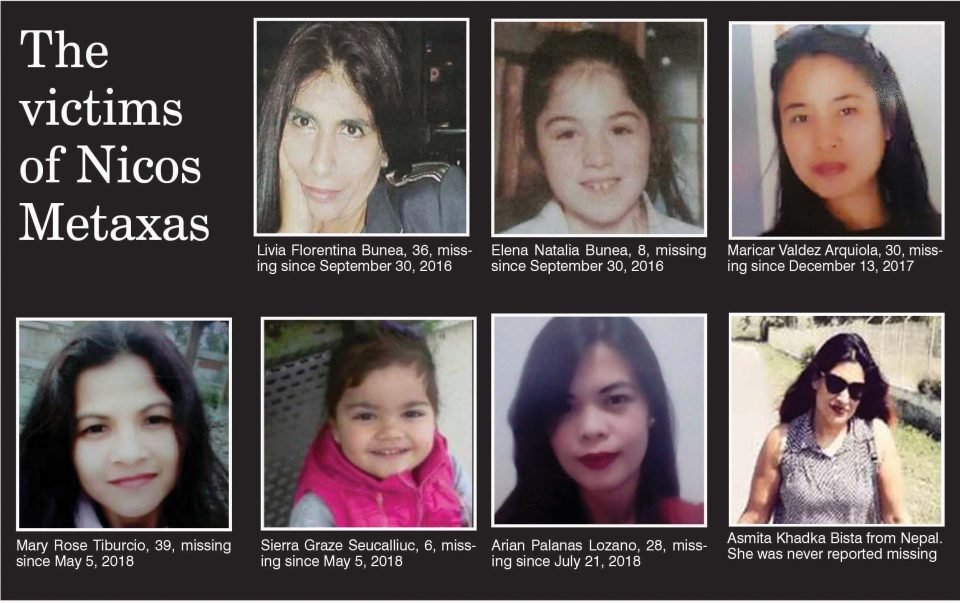 The Green Party on Thursday said the first anniversary since the disappearance of five women and two children unfolded with the gradual discovery of their bodies, murdered by a serial killer is a reminder of the state’s obligation to take measures against domestic violence that often leads to femicide.

The accidental discovery of a naked and bound female body in a mine shaft in Mitsero on April 14 last year led to a case that shocked the island involving a 35-year-old army officer, Nicos Metaxas, who, eventually admitted to killing in total five women and two children.

“The tragic information that has come to light continues to shock us all, but especially the relatives and friends of the victims,” the party’s women’s arm said in a written statement.

The only peace for the relatives of the victims but also for the victims themselves, is the fact that the culprit is now in prison, the group said, adding however that there is still no progress as regards the much-anticipated  findings of  the independent authority for the investigation of complaints against the police about the way they handled the reports about the victims’ disappearance. This is due to the stalling by the competent authorities and the unprecedented pandemic, they said.

At the same time, they said, April this year “is a resounding reminder” to the authorities for attributing responsibility for the loss of the victims; Marie Rose, 38 from the Philippines and her six-year-old daughter Sierra Graze, Arian Palana Lozano, 28, and Marikar Valdez, 29, both from the Philippines, 30-year-old Asmita Hatka Bista from Nepal and 36-year-old Livia Florentina Bunea from Romania and her daughter Elena-Natalia, 8.

They added that it was now “a clear obligation of the state to take measures and immediately implement practices aimed at preventing, tackling and combating domestic violence, which can often result in femicide.”

As the Greens’ women’s arm, they said they welcomed the steps already been taken to tackle domestic violence in the midst of the coronavirus pandemic and called on police to strictly implement the protocols concerning domestic violence, “thus keeping the promise by police chief Kypros Michaelides for the protection of human life with special emphasis on women and children, regardless of race, religion and age.”

They also recommend hosting domestic violence victims in hotels to remove them from perpetrators while the coronavirus restrictive measures are in place and provide to them all the necessary services for the best possible protection of themselves and their children.

The group said their suggestions would contribute so that the mechanisms and policies for the prevention and fight against any form of violence will be strengthened and more effective protection will be given to the victims and especially to the women belonging to the vulnerable groups including economic migrants and domestic helpers.

Police were heavily criticised for not properly investigating the first cases of missing women when there might still have been time to catch the serial killer early and possibly stopping him from claiming other victims.

Metaxas was sentenced to seven life imprisonment terms after pleading guilty to killing the five women and two children.

The affair led to the resignations of then Justice Minister Ionas Nicolaou and the dismissal of the chief of police Zacharias Chrysostomou.

Coronavirus: Supplies handed over to Turkish Cypriots on Thursday