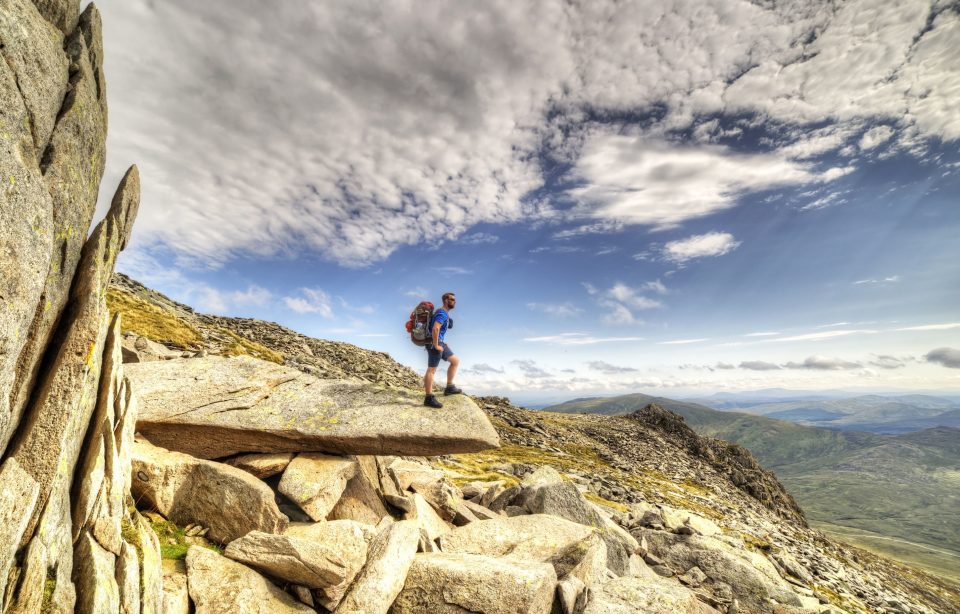 a hiker in Snowdonia. PA Photo/iStock.

Along with limiting our social interactions, the lockdown is playing havoc with personal pedometers. There’s only so many steps you can clock up between the bedroom, bathroom and kitchen, after all.

Once restrictions are lifted, we’ll all be yearning to venture on expeditions far and wide, including a return trip for many to the UK.

While now is the time to stay put, there’s no harm in armchair drifting – using time indoors to plan al fresco trips for later this year. If you do dream of striding over hills and up mountains, or rambling along coastlines and through forests, consider one of these exhilarating hikes in the UK and Ireland.

Where: The Hardy Way, Dorset

Victorian poet and novelist Thomas Hardy captured the essence of rural England in many of his great works, romanticising locations throughout the Dorset countryside. Keen rambler and literature lover Margaret Marande joined the dots between many of these famous spots by creating a long-distance 220-mile walking trail, documented in her book, The Hardy Way – A 19th Century Pilgrimage. Spend the night at The Inn in Cranborne where Hardy once stayed, visit Win Green, featured in Tess of the d’Urbervilles, and head to Shaftesbury – referred to as Shaston in Jude The Obscure. Along the way, admire quaint, chocolate-box villages and sweeping chalk downs.

Where: The Wicklow Way, Ireland

Few cities are within such easy reach of wilderness, but the Wicklow Way starts literally from the doorsteps of Dublin’s southern suburbs. A series of self-guided walks makes up the network, which passes through the forests, uplands and mountainous landscapes of County Wicklow. Walk through the valley of Glendalough, home to the ruins of a monastic city visited by pilgrims for more than 1,000 years, pass by the Powerscourt Waterfall, and marvel at the Guinness Lake, where black waters contrast with a white sand beach. The full 127km trail begins in Rathfarnham and ends in the County Carlow village of Clonegal.

Where: The West Highland Way, Scotland

History and folklore sweep through the lochs and glens of Scotland, so choosing the best route to follow can be hard. Celebrating its 40th anniversary this year, this epic trail starts from Milngavie on the outskirts of Glasgow and stretches 154km to Fort William at the foot of Ben Nevis in the Highlands. Highlights include climbing Conic Hill for views of Loch Lomond, a look at the carved stone seat believed to contain a sword belonging to Robert the Bruce, and a vertigo-inducing ascent of the Devil’s Staircase. There’s also an opportunity to retrace a path taken by 18th century outlaw Rob Roy MacGregor.

Containing one of the highest peaks in the United Kingdom, Snowdonia National Park is a playground of popular walking trails. But there’s more to this region of North Wales than majestic mountains; forests, moorland and sparkling blue lakes present some of nature’s finest work. Some walks cover tourist towns such as Beddgelert and Betws-y-Coed, while quieter routes pass through remote sheep farms and vestiges of the Welsh slate industry. If you have time, combine a hike with a ride on the Welsh Highland Light Railway and the Ffestiniog Railway.

Castles in the sand

Dotted with castle turrets and fringed by silky sands, Northumberland’s coastline is an area of historical interest and remarkable beauty. Undulating dunes back vast beaches along the 100km Northumberland Coastal Path, gazing out to islands famous for their rich birdlife. There are more castles here than any other county in England: explore Alnwick, where you can take part in Harry Potter-themed activities; discover Bamburgh, which sits on a basalt crag overlooking the sea; or admire Dunstanburgh, which sits on a remote, breezy headland. But the highlight is the Holy Island of Lindisfarne and its famous tidal causeway.

Where: The Burren Way, Ireland

Rugged, wild and romantic, Ireland’s dramatic west-coast scenery is captivating. Running for 114km across County Clare, from Lahinch to Corofin, the Burren Way is packed with photographic moments. A star attraction is The Burren, one of the largest karst limestone landscapes in Europe, leading to the Cliffs of Moher, which promise staggeringly beautiful views. But it’s the local characters who make this journey doubly exciting: meet artists and craftspeople on Aran island, Inishmore, or listen to traditional Irish music in the village of Doolin.

Coronavirus: police will be watching from the skies to enforce Easter lockdown