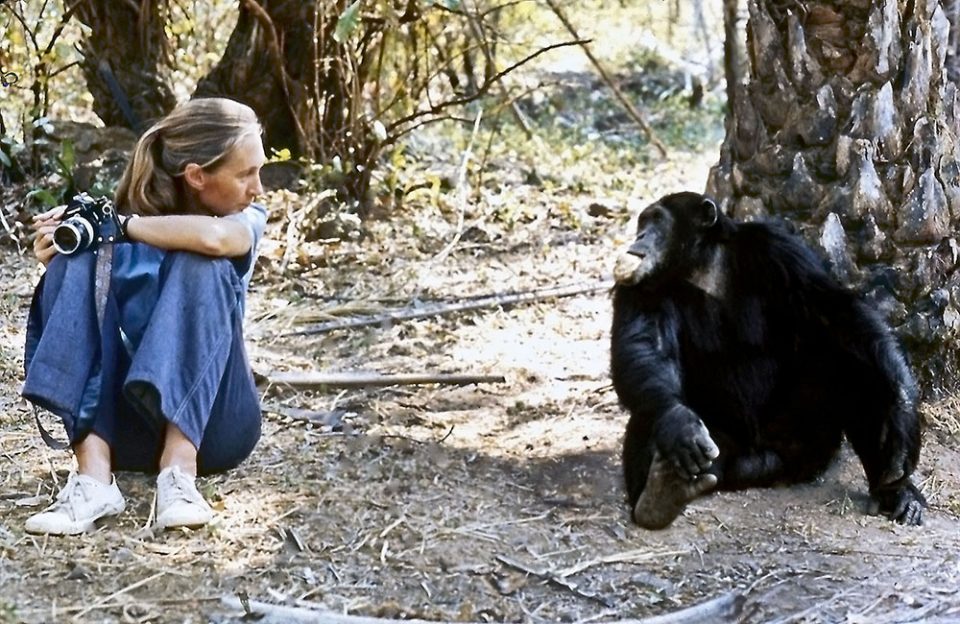 One of the most important figures in wildlife conservation, Dr Jane Goodall remains relentless in her pursuit of a better understanding of the natural world. And she’s hopeful for lasting change, she tells Gemma Dunn.

When Dr Jane Goodall arrived on the shores of Tanzania in 1960, she hadn’t envisaged where it may lead.

Aged just 26, the keen ethologist had set her sights on Gombe Stream National Park and it was there, with her mother in tow, that she began her field research on the little-known world of wild chimpanzees.

Equipped with little more than a notebook and binoculars, Dr Goodall – who immersed herself in their natural habitat – would observe the primates, coming to understand them not only as a species, but also as individuals with emotions and long-term bonds.

Among her findings was the discovery that chimpanzees make and use tools – a breakthrough that remains one of the greatest achievements of 20th-century scholarship.

Understandably, Dr Goodall, now 86, describes those days as ‘the best time of her life’.

“I knew those chimps; they were like part of my family,” she reasons. “I was joyful with them when they had a baby and I was grieving when one of them got sick or died. Being out in the forest, it was an amazing time.

“Then in 1986, realising that the chimps across Africa and the forest were in trouble, in captivity, I knew that my time had come to pay back.”

Her decision to embark on this journey was to be the marker of her groundbreaking legacy; a plea that’s seen her go on to transform environmentalism, non-human animal welfare and conservation; and redefine the relationship between humans and animals in ways that emanate around the world.

Yet today, Dr Goodall DBE, much like the majority of us, is at home.

It’s a forced break from her usual 300-plus days spent abroad each calendar year.

“I’m actually busier; it’s more exhausting than being on the road to be honest!” she whispers down the phone, having retreated back to her family home in Bournemouth during the Covid-19 pandemic.

“I hate the airports, the aeroplanes, but now I’m busy all day trying to get out on social media [Dr Goodall boasts in excess of 3.5 million followers across the board], trying to make up for not being able to travel!

“We’ve had pandemics before, but we’ve never reacted quite like this,” Dr Goodall follows.

“But having lived through the Second World War, through other pandemics and through nasty situations in Africa, I know that we will get through this.

“I guess I’ve learned from being battered,” she muses. “There’s a poem [Invictus, by William Ernest Henley] that says, ‘My head is bloody, but unbowed’. I like that.”

As for what we can learn from this crisis, “It’s our messing with nature, cutting down forests, hunting animals, eating them and selling them, that’s led to these viruses spreading from animals to people,” warns the primatologist-cum-anthropologist.

“I’m hoping what will emerge from this is a better understanding of our relationship with the natural world.”

One offering likely to inspire such thinking – and our reason for chatting today – is her latest National Geographic venture, Jane Goodall: The Hope.

“Well, isn’t it amazing that a film called The Hope should come out right now, when we desperately need hope!” she says with a chuckle.

The two-hour documentary special – released in conjunction with the 50th anniversary of Earth Day – charts Dr Goodall’s rise to worldwide icon, from her days in Gombe and the 1977 formation of the Jane Goodall Institute (JGI) to her Roots & Shoots youth empowerment programme, founded in 1991, and beyond.

“It’s in 24 countries – nearly 25,” she announces of JGI, which has a strong base in the UK, and was set up to inspire hope through action across the globe.

“And Roots & Shoots is in 65 countries and growing. It’s all over the world – kindergarten, university, rich children, poor children and children in different environments. It can grow on any soil, in any place, in any culture.

“What I’ve learned of young people,” she continues, “is once you give them the tools to understand the problems, you empower them to take action to solve them. Listen to their voices, don’t dictate to them. They’re so dedicated, determined and passionate and hopeful.

“We are going to change the world; we will slow down climate change.”

Achieving lasting change is in the approach, Dr Goodall – a mother and grandmother herself – has learned.

“You know, when I first began talking to the scientists in the medical research labs – these awful 5ft by 5ft cages – there were animal rights people who refused to speak to me,” she recalls.

“They said, ‘How can you sit down with those evil people? How can you talk with them?’ And I said, ‘But if you don’t talk, how on earth do you think you’re going to change them?’

“I think sometimes at the beginning of a movement, this kind of aggressive approach may be necessary to wake people up, but I couldn’t do that,” says Dr Goodall. “My way has always been to go and talk to the people quietly.

“The way I have of dealing with people, that’s why Roots & Shoots is all over China,” she adds. “We have one of the very few registered foreign NGOs, the Jane Goodall Institute China, endorsed by the government.

“Certain cultures, you must not make people lose face,” she counsels. “You want to change their heart.”

Through her travels, Dr Goodall has certainly done just that, unwavering still in her relentless commitment and determination to spread a message of hope.

It’s brought her a plethora of fans from every corner of the globe, she admits.

“I have to say, my email is overwhelmed with everybody wanting me to stay alive, [asking] ‘Am I taking care?'” she shares. “It’s heartwarming, because they all promise – grown-ups and children – that they’re going to do their bit.

It’s what keeps her on the road.

“I can’t slow down, can I? Obviously I’ll never get done all that needs to be done. But I’ll just go on, struggling till the end,” she realises.

“I want to grow Roots & Shoots in every country; I was going to go to India. I hope I still can, but who knows? There are a lot of places I want to try and make a difference in – that’s what I want to do now.

“I hope this film inspires people,” she finishes. “I hope it gives them hope – it’s title should, if nothing else!”