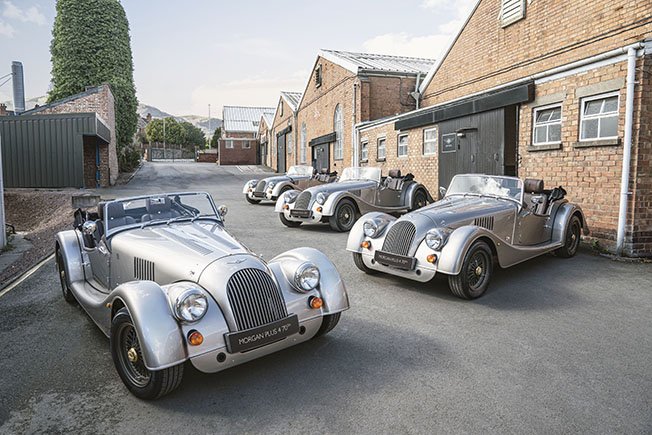 Built to celebrate 70 years of Plus 4 production, each of the platinum anniversary models will be individually numbered and built in a unique specification with several notable details

The Morgan Motor Company has built the first of its limited-run Plus 4 70th Anniversary Edition models.

The four cars, the first of just 20 examples to be built, were completed at Morgan’s factory in Malvern Link, UK, at the end of March.

Built to celebrate 70 years of Plus 4 production, each of the platinum anniversary models will be individually numbered and built in a unique specification with several notable details.

The production of the special models follows the launch of the all-new Plus Four earlier in March, which is underpinned by Morgan’s latest CX-Generation aluminium platform. The new Plus Four is referred to with a wordmark as opposed to the numerical reference of its predecessor, and will replace the outgoing 4/4, Plus 4 and Roadster.

The introduction of the new model means that the Plus 4 70th Anniversary Edition models will be the last to be built on Morgan’s traditional steel frame chassis, a version of which has been in production since the Morgan 4-4 was introduced in 1936.

First built in 1950, the Plus 4 is one of the company’s best-selling models throughout seven decades of production, and is loved by Morgan fans worldwide. For the first time ever, the chassis will be painted in gold, highlighting its significance in the company’s 111-year history.

Just twenty Anniversary Edition cars are to be built. They feature an individually numbered plaque, marking them out for years to come as some of the last steel-chassis models. A specially embroidered headrest will further differentiate them.

The cars come with an engine map configured by Aero Racing, Morgan’s in-house motorsport specialists, raising power from 154bhp (115kW) to 180bhp (134kW), and taking its 0-62mph (0-100kph) acceleration time down to less than seven seconds. Alongside this, the cars are fitted with an Aero Racing sports exhaust, finished with a ceramic-black tail pipe, allowing the engine to truly ‘sing’.

Jonathan Wells, Morgan Head of Design, says “our aim was to create a classic look, yet one that exudes the significance of what it represents. A mix of premium tones, high-quality materials, and exquisite details reflect the essence of the venerable Morgan Plus 4, and provide a fitting tribute to the steel chassis that has formed its backbone since it was launched in 1950.”

The cars are priced at £60,995.00 including VAT, and deposits have already been taken on every one of the 20 being built.

The completion and distribution of the first cars came just before the Morgan Motor Company took the decision to close its factory for one month as part of efforts to combat the spread of the coronavirus.

For the first time since World War II, the Morgan factory was closed for an extended period, beginning March 25.

‘One World’ coronavirus special kicked off with six-hour livestream