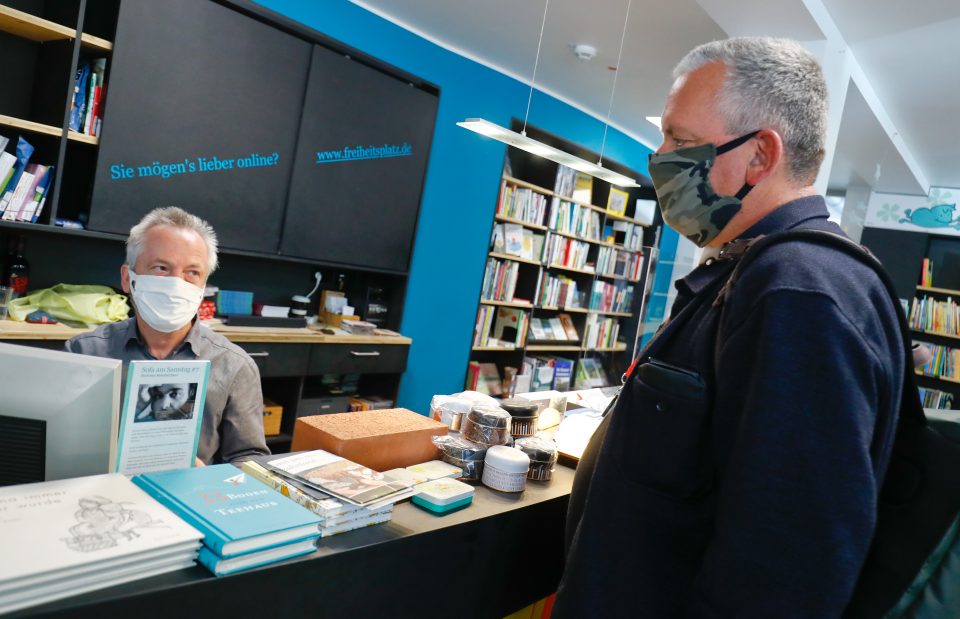 Bookseller Dieter Dausien serves a customer in his bookshop

By Andreas Rinke and Micha Serr

Germans returned to the shops on Monday, craving retail therapy after a month of lockdown, but Chancellor Angela Merkel was worried that they could increase coronavirus infections again just as the number of new cases had started to slow.

Shops up to 800 sq metres, as well as car and bicycle dealers and bookstores, are allowed to reopen this week under an agreement with the leaders of Germany’s 16 states. Schools are set to begin reopening in two weeks.

Europe’s largest economy has relied more on domestic demand in recent years as the strength of its traditional export engine has faded, and the move echoes a slow easing in neighbouring countries, equally desperate to revive business and society.

“We need life again. This whole time it was like a ghost town,” said Michaela Frieser, not wearing a face mask, in Frankfurt’s main shopping district. “The sun’s out, we saved enough money and now we need to go out and spend it!”

The federal and state governments have strongly recommended that Germans wear face masks when shopping and on public transport, and some states have even made that compulsory.

Gertrude Sietzy, wearing a face mask and disposable gloves nearby, was thrilled to get outside.

“I don’t like ordering on the internet,” she said, adding that, if shoppers kept their distance, “it should work”.

To the east, farmers’ markets, craft shops, car dealerships and dog grooming salons opened in the Czech Republic, which had imposed one of Europe’s earliest and strictest lockdowns.

“This is relief from the stress that we will have to throw away the harvest,” vegetable grower Milan Vystejn said at his stand in Prague’s Tylovo Square.

To the west, Luxembourg said a similar selection of stores could reopen, and that schools would begin reopening from May 4, starting with final year pupils taking exams. But when all schools reopen, classes will be split into two halves that each alternate between a week in school and a week studying at home.

Merkel told officials from her Christian Democrats (CDU) that the danger of infection remained high in Germany, after weekend sunshine drew many into parks.

She told reporters it would take 14 days to see if the easing was pushing up the infection rate, and that “we must remain vigilant and disciplined”.

Germany has the fifth highest COVID-19 caseload behind the United States, Spain, Italy and France, but has kept fatalities down thanks to early and extensive testing, and has only a third of the deaths of New York city alone.

Its total of confirmed cases rose by 1,775 to 141,672 on Sunday, the second consecutive day that the number of new infections had fallen.

The death toll rose by 110 to 4,404, the tally from the Robert Koch Institute showed.

The gradual easing provides for social distancing rules to remain in place until May 3. Schools will start opening from May 4, with priority for final-year students. Hairdressers can also reopen then. The group will meet again on April 30 to review how to proceed after May 3.

The Germany economy is now in a severe recession, according to the central bank, the Bundesbank, which said recovery was unlikely to be quick as many coronavirus restrictions could stay in place for some time.

The government has tried to cushion the economic effect of the shutdown with measures including a 750 billion euro ($815 billion) stimulus package.