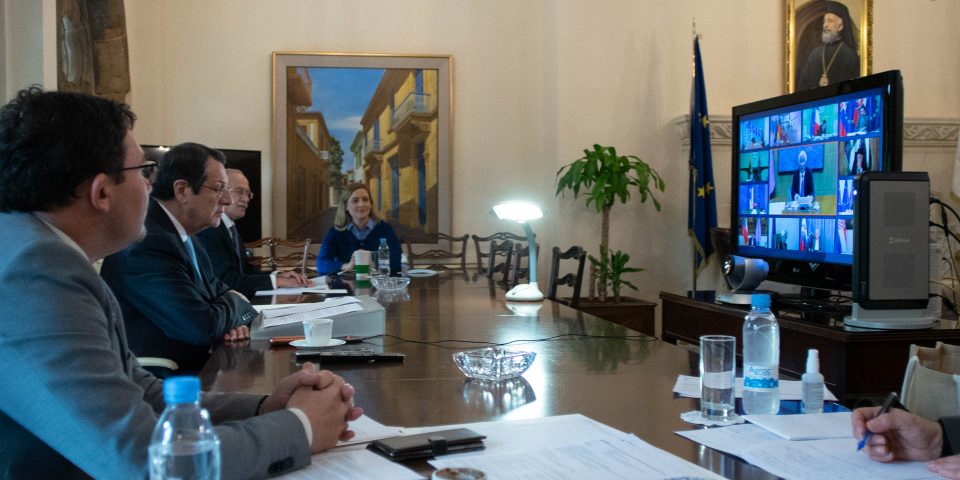 President Nicos Anastasiades on Thursday told EU counterparts that a financial package the bloc is putting together to cushion the economic fallout from Covid-19, should focus heavily on those countries most hard hit, like Cyprus.

He made the remarks during a European Council session taking place by teleconference.

Anastasiades pointed out that, irrespective of the financial instrument chosen to prop up economies, what mattered was to provide support to nations that have borne the brunt of the fallout.

Cyprus, reliant on services and tourism, was one such country. In his remarks Anastasiades called for a strengthening of the EU’s Cohesion Policy and Common Agricultural Policy.

He said Nicosia is in favour of supporting countries through EU funds, rather than borrowing.

He noted that in the midst of a global pandemic when nations should be cooperating, Ankara is maintaining its hostile posture and taking aggressive actions in the eastern Mediterranean.

Turkey’s actions – dispatching a drillship to Cyprus’ exclusive economic zone – are in violation of international law, he added.

Also on Thursday Washington called on Turkey to cease new drilling in Cypriot economic waters, while Moscow said it was closely monitoring the situation.

Asked for a comment by the Cyprus News Agency (CNA), a spokesperson for the US Embassy in Nicosia said Washington continues to urge all parties to avoid steps that raise tensions in the region.

“The United States is aware of reports the Turkish drillship Yavuz arrived April 20 in an area that Cyprus claims as its exclusive economic zone.  We urge Turkish authorities to halt these operations and continue to call on all parties to avoid steps that raise tensions in the region” the spokesperson said in a statement.

“The United States is deeply concerned by recent reports of Turkey’s plans to drill in the waters off Cyprus. This provocative step raises tensions in the region. We continue to believe ​Cyprus’s oil and gas resources, like all of its resources, should be equitably shared between both communities.”

The CNA likewise sought comment from the Russian Embassy.

In a statement, the embassy said it is closely following developments, and called for the “avoidance of activities that could lead to destabilization and increase the potential of crises in the region.”

The Russian Embassy also noted “this situation reaffirms once again the need to achieve a permanent, viable and just settlement of the Cyprus problem, that will reflect the interests of Cypriots themselves as well the goal to ensure peace, security and stability in the eastern Mediterranean.”

Armenian Genocide to be commemorated on Friday

Coronavirus: church standoff ends, priest to be taken to court