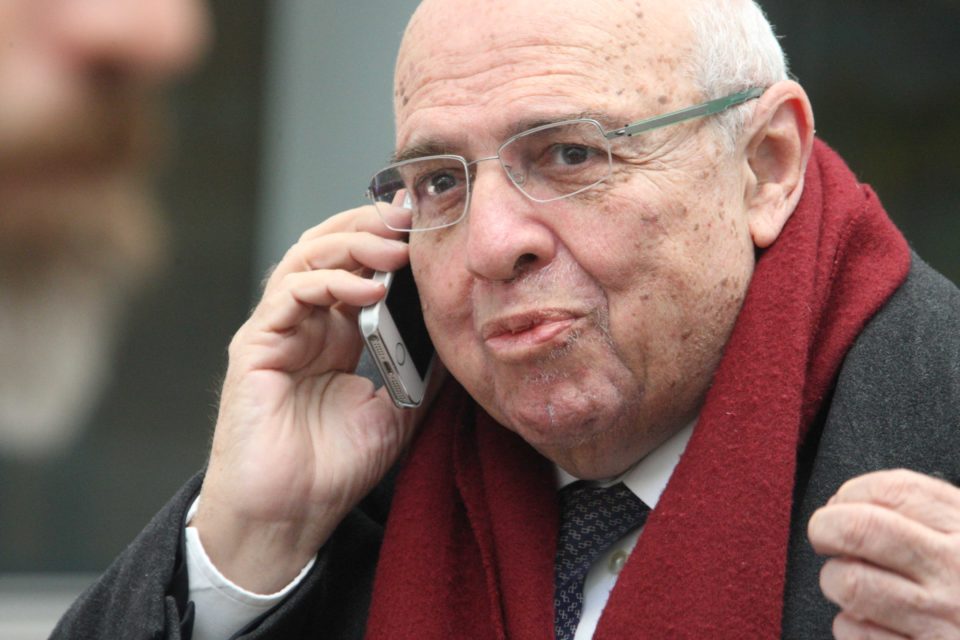 Former attorney-general Alecos Markides passed away on Thursday. He was 77.

News of his death was posted on Twitter by lawyer Chris Triantafyllides:

“Alecos Markides ‘left us’ a little while ago. An outstanding lawyer. A jewel for the legal profession. For those who knew him, he was a man with rare principles for our time. Bon voyage, Alecos. Thank you for honouring me with your friendship.”

President Nicos Anastasiades tweeted: @My dear friend Alecos Markidis wrote his own unique story as an excellent lawyer, attorney-general, member of parliament, politician. He was characterised by his deep knowledge, diligence and honesty, but also his fighting spirit. “May the earth rest lightly on you.”

Markides was pro solution when it came to the Cyprus issue and was one of the most vocal proponents of a ‘Yes’ vote on the Annan plan during the referendum period in 2004.

He was active for three decades – 20 years in the leadership of the Disy party, eight years as attorney-general and negotiator with the Turkish side and ran for President of the Republic in 2003, albeit as an independent. He got nearly 7 per cent of the vote.

After that, he retreated to ‘private citizenship’ albeit “very much interested in developments as regards the Cyprus problem” – and of course much in demand as an expert and pundit, widely respected for his lucid mind and legal acumen even until recently.

According to Panayides, Markides chafed at the restrictions in 1950s Cyprus society – not being allowed to greet a girl or go to the cinema – but remembers himself as a “good pupil”. His professional life, both as lawyer and politician, was smooth and successful.

One of his great battles as attorney-general was to reform the law regarding hearsay – the type of evidence where a witness testifies about something told to them by a third person – trying to change the law to admit such evidence. It took five years, battling “reluctant and conservative” MPs and judges, but the battle was finally won.

On the Cyprus issue, he said: “I believe that we have to try for a compromise solution before it is too late”. The ever-increasing number of Turkish settlers threatens to present us with a fait accompli, unless something is done. “Now, you might say that to change the demography of a country is a war crime, and therefore it can never be legalised,” he admits. “OK, nobody disputes that – but whether it can be undone, not in theory but on the ground, is quite another matter.”

“The disturbing thing,” he added, “is that many people in Cyprus – many politicians in Cyprus – think of themselves as being experts in international law, but in fact their international-law knowledge is exhausted by the phrase ‘It is a war crime, and therefore it can not be legalised’.”

The peak of his frustration came in the run-up to the 2004 referendum, an often “illogical” time when his reasoned arguments mostly fell on deaf ears. Did he wish he’d tried some other way to convince people? “I don’t know what other ways there were,” he replied with a touch of exasperation. “You advocate something, you try to reason – but at the time, at some particular point in Time, reason had nothing to do with decision. This is a fact of life, we have to accept it. If somebody doesn’t want to listen, he doesn’t listen.”

For Markides it was all a question of analysis, amassing knowledge and getting the bigger picture. “The history of the human race is a history of tragedy,” he said. “And perhaps one wise saying about History is that ‘History never teaches anybody anything…especially in Cyprus…”

Coronavirus: economic sectors having to do with people, last to open, minister warns (Updated)