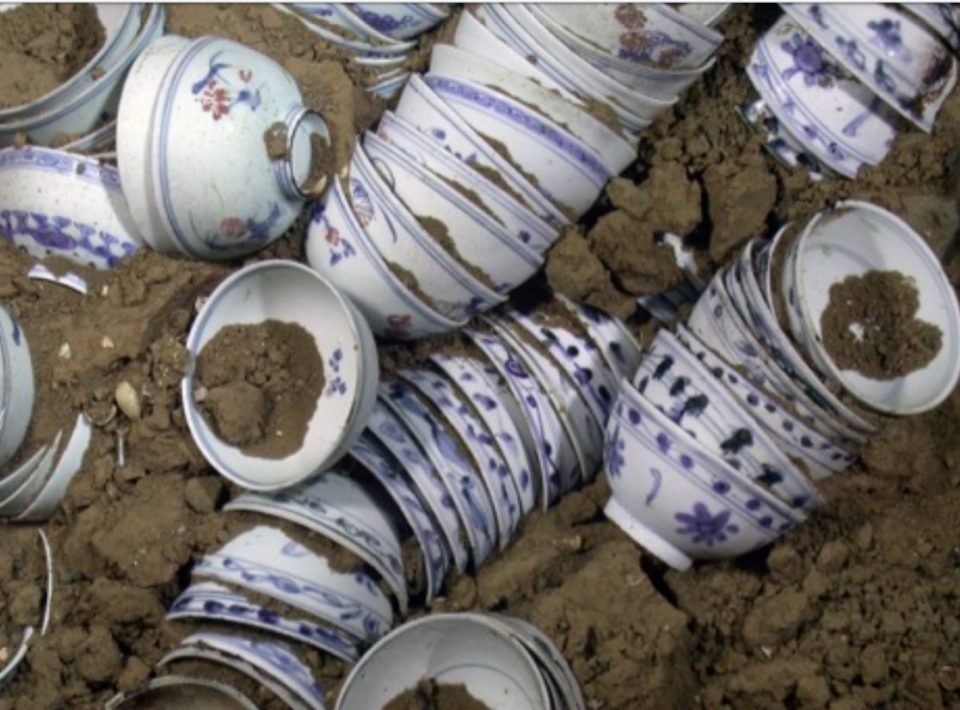 The Cypriot authorities have accused a private British company of illegally excavating ancient shipwrecks in the eastern Mediterranean and “violently extracting objects, causing destruction to their context”.

The strongly worded statement issued by the antiquities department on Friday comes less than a week after the company, Enigma Recoveries, unveiled news of spectacular treasures including Chinese Ming dynasty bowls found in a dozen wrecks in the waters between Cyprus and Lebanon. The fleet of Hellenistic, Roman, early Islamic and Ottoman wrecks were lost some two kilometres below the waves of the Levantine Basin.

One British archaeologist likened the “once in a generation” finds to discovering a new planet.

But Enigma’s revelations were as enigmatic as the company’s name, with its initial press release raising many questions such as who owned the finds and what would happen to them. The artefacts are at present impounded by the customs department.

Enigma, which used Limassol as its base for the marine excavations which ended in 2015, says the fascinating collection of 588 artefacts found in one vessel dating from 1630 could be in a museum by now, to be appreciated by a wide audience. It has accused the antiquities department of planning to sell the finds one by one at auctions.

The department of antiquities hit back on Friday, denying the accusations and saying the company is well known for its illicit underwater excavations and their intention to sell objects.

“The company is well known both to Cyprus and other countries, as well as international organisations, including Unesco, for its activities in illicit underwater excavations and their intention to sell objects is evident in the documents filed with the United States Securities and Exchange Commission,” the department said in a written announcement.

“The Cypriot authorities will not, under any circumstances, be auctioning the objects as erroneously reported, since this does not only contravene the ethical code, but it is also prohibited by the antiquities law of Cyprus.”

Engima insists its actions were not illegal and says that while the research ship was entering and departing Cyprus multiple times, the ship’s crew was not aware Cyprus required the cultural artefacts recovered to be listed as ‘cargo’ – which prompted the local customs department to seize the objects.

No feedback received during former visits, or when the same ship departed the same port, flagged up any concerns at the time, the company said.

“Enigma Recoveries has consistently reached out to Cypriot authorities to resolve this unfortunate misunderstanding,” the company told the Cyprus Mail.

There is a lot at stake. The star of Enigma’s discoveries is an Ottoman colossus which sunk around 1630, containing goods of 14 cultures and nations from the Levant and as far away as Italy, Spain, Yemen, Iran, India and China.

On the ship the scientists found glass and ceramics from Belgium, Spain, Italy, Yemen and the Persian Gulf alongside Arabian incense and Indian peppercorns. The vessel sank in the reign of the sultan Murad IV (r. 1623-1640).

In the hold was also the earliest Chinese porcelain found on a Mediterranean wreck and the first discovered in the Near East. The 360 cups, dishes and a bottle were made in the kilns of Jingdezhen during the reign of Chongzhen, the last Ming emperor. Decorated with idyllic rural scenes, figures and floral motifs, and designed for sipping tea, in Ottoman hands the 51 styles of blue-and-white cups were adapted to a new fashion sweeping the East, coffee drinking.

“The Enigma colossus is a once in a generation find,” said Tim McKechnie, co-director of Enigma Recoveries. “Imagine, it was so big that two normal-sized ships could have fitted on its deck. Despite being attacked by shipworms, silent assassins of the seas, the ship is richly preserved with a dizzying mix of goods from the ends of the world. The 3D photogrammetry mapping of the Ottoman colossus was a first for this technology in the East Mediterranean.”

However, according to the company it has not been able to do the research as planned, as the artefacts were confiscated by the customs department. Instead the British scientists had to focus on interpreting the shipwrecked discoveries using “the project’s comprehensive records and databases”.

Even who did the recording of the artefacts and their preservation is hotly disputed. The company says all 588 artefacts collected from the ship were carefully recorded using a suite of digital photography, HD video, photomosaics and multibeams.

The antiquities department insists their staff did the recording and has overseen their conservation.

“Their conservation was undertaken by a specialist conservator under the supervision of the Department of Antiquities, which is still monitoring their state of preservation,” the department said, adding that the digital records show “show the violent extraction of objects causing destruction to their context”.

Engima, meanwhile, says it is concerned over the condition of the artefacts.

“Some of the wooden artefacts are extremely delicate. The glazes on jars and Chinese porcelain left too long in buckets of water are likely to fragment. We are unable to comment on the artefacts’ current state of preservation or damage under Cypriot control,” the company told the Cyprus Mail.

The company says the wreck was discovered in the Levantine Basin of the East Mediterranean, outside the territorial waters of any country and the antiquities department accepts the the artefacts had been excavated in the EEZ/contiguous zone of Lebanon but says as the items were transported into Cyprus waters to Limassol harbour they had to be declared as cargo. As they were not, they had to be seized as they came under the jurisdiction of the customs department.

The company says it is hopeful it will be able to return to the Ottoman wreck to continue the work left in December 2015 “under more favourable conditions”.

“We will continue to make every effort to reach an amicable agreement with Cyprus customs that will lead to the return of the artefacts,” Aladar Nesser, Enigma Recoveries’ international relations representative told the Cyprus Mail.

If the antiquities department has its way, this will not be any time soon.

“A series of measures [have been] undertaken, including, primarily, the recent amendment of the antiquities law, so as to enhance the protection of the underwater cultural heritage in all the sea-zones of the Republic of Cyprus,” its statement on Friday said.

Hope mixed with uncertainty and worry as football reawakens