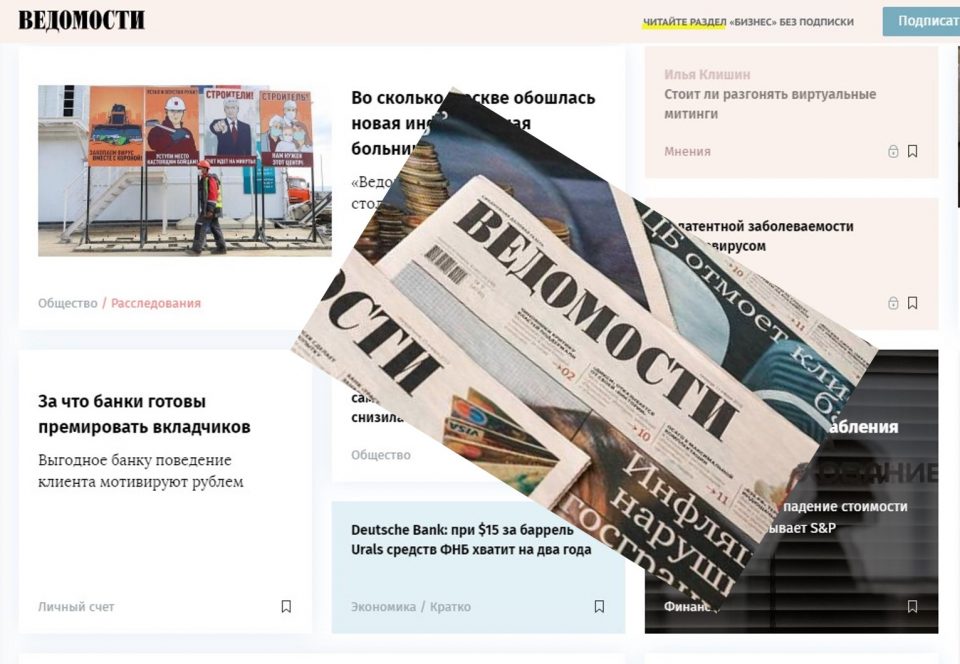 Journalists at Vedomosti, one of Russia’s most prominent business publications, on Thursday accused their editor of imposing stifling pro-Kremlin censorship upon them and suggested the board of directors appoint someone else.

In a blunt editorial article published on the newspaper’s website, journalists complained that Acting Editor-in-Chief Andrei Shmarov had banned the publication of opinion polls carried out by a research firm that has irritated the Kremlin.

A day earlier, the newspaper’s media reporter, Kseniya Boletskaya, had publicly complained that Shmarov had banned negative coverage of President Vladimir Putin’s plans to change the constitution to allow him to extend his rule until 2036.

Anyone who flouted the ban would be fired, she said.

“Changes of this kind undermine trust in the publication,” the editorial article said on Thursday, referring to the alleged ban on publishing offending opinion polls.

Staff, it said, were determined to defend the newspaper’s values.

“Having lost its reputation, Vedomosti will become another dependent and managed media outlet whose aim is not to satisfy readers’ needs with news that has been verified and quality analysis, but to serve the interests and ambitions of its official and secret owners,” it added.

Shmarov did not answer a request for comment and left questions put to him by Reuters unanswered.

The surveys staff said had been banned, conducted by the Levada Centre, a pollster regarded as more independent than state counterparts, have regularly appeared in Vedomosti.

The paper this month published a Levada poll which found that 38 percent of Russians believe that Putin represents the interests of oligarchs, bankers and big business.

Levada was officially classified a “foreign agent” by authorities in 2016, a designation which complicated its life and which is handed out to organisations deemed undesirable.

Asked about staff claims of censorship at Vedomosti, Putin’s spokesman Dmitry Peskov told reporters that the Kremlin did not interfere in media outlets’ editorial policy and was unaware of the ban on Levada polling.

“We were and remain interested in having first rate quality publications with very talented teams,” said Peskov.

Vedomosti has until now been widely regarded as one of the few high profile publications in Russia not to be under the direct control of the authorities or businessmen close to the Kremlin.

Shmarov was appointed acting editor-in-chief at the end of March, after it was announced that two businessmen would be buying the newspaper.

“He (Shmarov) yesterday said that he went to the presidential administration for an interview before being appointed and that they drew him red lines (not to cross) and that the most serious one was Levada,” Dmitry Simakov, Vedomosti’s chief editor told Reuters.

“Yesterday I had a conversation with him and he told me not to mention Levada anymore. Otherwise, he said they (the Kremlin) would remove him and everyone else and that the publication didn’t have any money.”

Philip Sterkin, the paper’s deputy editor-in-chief, told Reuters that Shmarov, in conversations with employees, had referenced the Kremlin’s stance on Levada’s polls.

Two other newspaper staff who wanted to remain anonymous said that Shmarov had told reporters that the Kremlin had ordered the ban on its polls.

“People are determined to fight. And if they lose, then they will leave,” said Safronov.