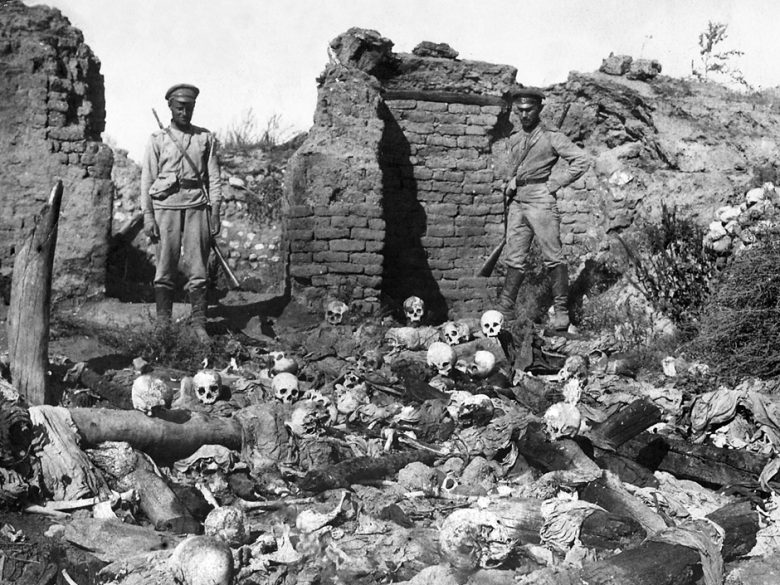 105 years ago, on 24 April 1915, about 250 Armenian notables of Constantinople were arrested and sent off to two holding centres near Ankara. This ominous incident was the prelude of a systematic and well-organised attempt to ‘cleanse’ the crumbling Ottoman Empire of Armenians and other gâvurlar (infidels), namely the Greeks and the Assyrians. The timing chosen to implement this unholy scheme was not random: World War I was monopolising the interest of the civilised world.

Among others, there were forced death marches to the inhospitable Der Zor desert, in East Syria; a network of extermination camps across the modern Turkey-Iraq-Syria border; widespread massacres; mass burnings and drownings (especially in the vicinity of the Black Sea); poisonings and medical experiments. Such was the cruelty of the Ottomans and the Young Turks that they would even rip foetuses out of their mothers’ wombs…

Although it is hard to be exact, it is commonly accepted that between 1915 and 1923 at least 1,500,000 Armenians were massacred or killed. While this figure has become engrained in the collective consciousness of the Armenian people, modern studies raise it closer to 1.7 million people, some of whom shall remain forever nameless, but not forgotten. On the centenary of the Armenian Genocide in 2015, its martyrs were canonised by the Armenian Apostolic Orthodox Church and their icon has since been placed in Armenian churches around the world.

In addition over 880,000 Armenians became refugees (80,000 were displaced within Turkey) and about 95,000 were Islamised, the ancestors of whom either ignore or hide their heritage, fearing stigmatisation and racism. Those who left their ancestral homelands initially fled to the Balkans and the Middle East, before scattering across the world and shaping the Armenian Diaspora as we know it. Aside from the psychological trauma, often overlooked is the cultural aspect of the Genocide: over 450 monasteries, 1,900 schools and 2,400 churches were seized, not to mention the countless libraries, works of art, relics and religious artefacts; additionally, the names of over 3,600 towns and villages have been Turkified.

Cyprus, one of their first destinations, widely opened its arms to welcome over 9,000 Armenian refugees, who arrived in Larnaca and all the other harbours, some by chance, others by intent; about 1,300 made the island their new home, bringing a new life into the old community and quickly establishing themselves in the arts, commerce, the letters and science, thus contributing to its socioeconomic and cultural development.

In Nicosia, the survivors of the Genocide erected its second-oldest monument in the world in 1932, which sadly itself fell victim to the Turks during the 1963-1964 inter-communal troubles. The new Genocide monument in Nicosia was erected in 1990-1991, while a second memorial was erected in Larnaca in 2006-2008.

Thanks to the initiative of Representative Dr Antranik L Ashdjian, in 1975 Cyprus became the second country in the world to recognise the Armenian Genocide. In 2015, thanks to the efforts of Representative Vartkes Mahdessian, Cyprus proceeded in criminalising its denial, and also issued a commemorative stamp, jointly with the Republic of Armenia, featuring the Melkonian Educational Institute, itself inextricably linked to the Genocide.

Currently, 32 countries recognise the Armenian Genocide; although this number may seem small, let us note that ten years ago it was just 20. It is unfortunate that some countries, fearing confrontation with denialist and unrepentant Turkey, allege that attributing the designation of ‘genocide’ should be an issue for historians, not legislators. However, there is still hope in that humanity will neither forget nor allow such shameful acts to be committed again.

Knowledge, research and awareness empower nations and preserve historical memory, acting as shields against convenient oblivion of the past and selective sensitivity of the great powers. Had Turkey been punished for the Armenian Genocide, Adolf Hitler would never have uttered the infamous “Who remembers the Armenians?” as a reassurance for perpetrating the Jewish Holocaust.

News podcast: The benefits of yoga to keep you healthy in mind, body and spirit