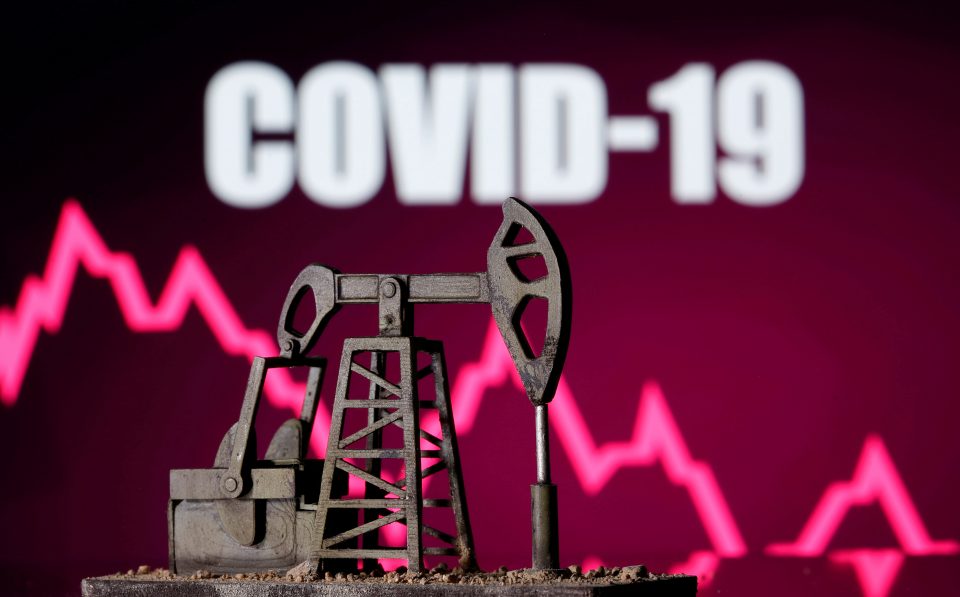 Last Monday the oil industry had one of its biggest shocks ever. WTI, the American oil price benchmark, dropped to -$40/barrel for the first time ever. This was partly as a result of technicalities, peculiar to the way WTI crude oil is traded on the US futures market. But it was also due to the huge oversupply of crude oil, well in excess of demand, filling up available storage capacity.

Since then WTI recovered and at close of business on Friday it was $17.30/barrel. The Brent crude oil price has also tumbled to $22/barrel, from about $70/barrel at the start of the year.

But nevertheless, not only is this price fall a serious warning but it sent shockwaves through the global oil and gas sector. It is an indication of the serious crisis caused by the unprecedented impact of the Covid-19 pandemic on the global economy, causing a collapse of oil and gas demand.

According to the International Energy Agency the drop in oil demand this month could be 29million barrels/day, about 30 per cent of demand in normal times. Clearly the historic agreement by OPEC+ on April 9 to cut oil production by 9.7million barrels/day, starting May 1, is not sufficient, still leaving a huge gap between supply and demand, and hence the very low prices.

Unless OPEC+ increases production cuts significantly, this situation will persist for most of the year, keeping prices lower for longer. In fact, the OPEC+ agreement is to reduce production cuts to 8 million barrels/day from July, making rebalancing of supply and demand more difficult. This will prolong the problem.

Provided that Covid-19 is brought under control during the summer and global economic activity returns to some kind of normality before the end of the year, IMF forecasts that global GDP will fall by an unheard-of -3% this year. Even though IMF forecasts a rebound in 2021, it will take longer for the global economy to get back on track. If Covid-19 persists longer, the consequences will be devastating and longer-lasting. But we have seen some hopeful signs, with some countries – including Cyprus – taking initial steps to begin partial re-opening. As economies rebound, oil will rebound.

It will take the oil industry even longer, two to three years based on past experience, to return to normality. Analysts expect the oil price to average above $30/barrel this year and above $40/barrel in 2021.

In the US, unless the government intervenes, many of the smaller oil producers will go bankrupt. And certainly, with storage full, oilfields will need to be shut. US companies including ConocoPhillips and Continental Resources have already said they will shut 25 to 30 per cent of their oil production, with most other US producers being forced to take similar measures. Cuts of this magnitude could have a beneficial effect in reducing global oil oversupply.

With oil prices staying below $30/barrel not many oil producers can make a profit. Over the next few months expensive oil production will come off-line, in addition to the agreed OPEC+ cuts.

The impact on the international oil companies (IOCs) is unprecedented. They have announced 20 to 30 per cent reductions in spending this year, with more to follow next year.

This means that the oil companies will limit investment where commitments have been made already, shelving new projects, avoiding risky ventures and freezing developments in frontier areas – such as the East Med.

The situation with natural gas is different but equally difficult. There was already a glut of LNG in the global markets before Covid-19 struck. This has led to the Japan-Korea (JKM) price for LNG falling to a record low of $1.94/mmBtu on Thursday.

Even if the global economy rebounds in 2021, full recovery of the LNG markets back to their pre-Covid-19 growth trajectory is by no means certain and is likely take longer, with oversupply continuing to persist.

When this is combined with projects still to come into the market over the next five to seven years, the problem will deepen. Based on projects already under construction and those that have already achieved final investment decisions, new LNG supply by 2027 could exceed the forecast increase in demand by over 75 per cent. LNG oversupply will persist well into this decade, keeping prices lower for longer. Gas producers and LNG suppliers face a challenging future, especially in the US.

Low oil prices are good for Cypriot consumers. If the average price this year remains around $30/barrel, then as normality returns the cost of petrol and electricity should be reduced by at least one third in comparison to prices at start of the year.

ExxonMobil already announced a delay of its drilling programme to September next year. As a result of Covid-19 and spending cuts, almost certainly all other planned drilling will now be postponed into next year. But with planned IOC spending cuts extending into 2021 in all likelihood resumption of drilling will take longer. And with global energy undergoing major upheavals, by 2022 exploration in Cyprus’ EEZ may no longer be a high priority for the IOCs.

Development of the Aphrodite gas-field and selling gas to Egypt’s Idku LNG plant is likely to be subject to similar challenges. Egypt’s LNG is struggling to compete in global markets, and with prices expected to remain lower for longer, it will continue facing headwinds. Cyprus may have to rethink its plans for the development of Aphrodite.

With prospects for exploitation of Cyprus gas remote for a long time, the developing situation renders the latest Turkish aggression in Cyprus’ EEZ impotent. Rightly, Cyprus is taking measures to maintain international pressure on Turkey.

Approving both the Hoegh and Energean applications to import gas will not only provide Cyprus with cheaper gas and faster, but it will also add redundancy. In case one provider runs into problems, the other can maintain supplies. If decisions to proceed are made quickly, Cyprus not only could benefit from avoiding EU emission charges starting early 2021, but would also benefit from the period of low LNG prices.

The global energy sector is undergoing massive change forced by the economic impact of Covid-19 pandemic, climate change and oil and gas oversupply keeping prices lower-for-longer. Cyprus should review its energy strategy and implement timely and radical changes in line with these developments.

Coronavirus: Seven new cases, measures should be relaxed in next few days (Updated)

S.Korean officials call for caution amid reports that N.Korean leader Kim is ill