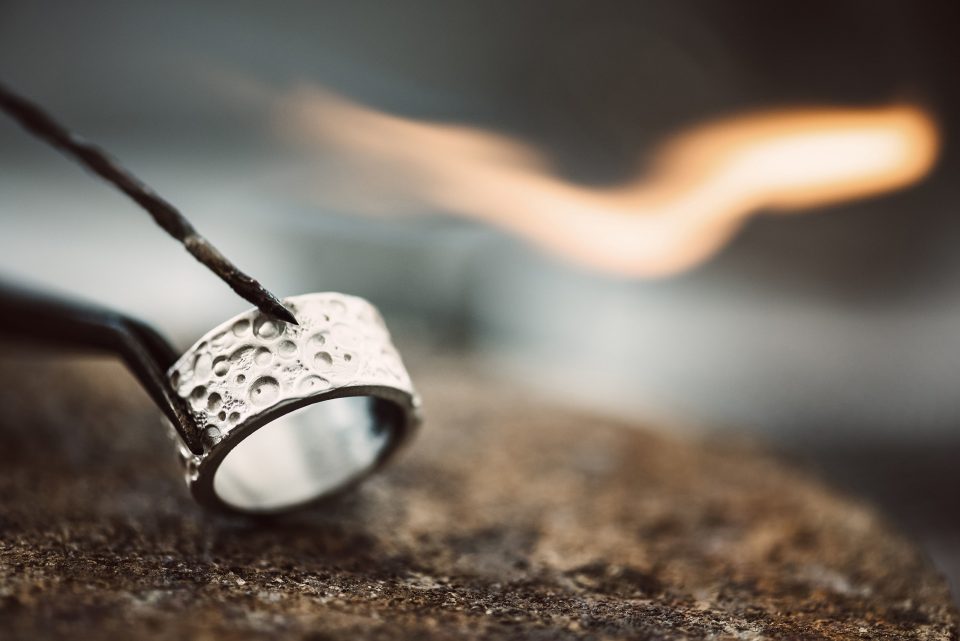 a ring being made. PA Photo/iStock.

Men wearing jewellery isn’t a new phenomenon, but there’s no denying the fact rings, bracelets and necklaces have traditionally been seen as firmly in the ‘female’ sphere.

It wasn’t always this way – consider Tudor paintings, in which men are depicted dripping in gold and pearls; a far cry from the last century or so, during which jewellery has predominantly adorned women.

Men wearing jewellery have often been considered renegades, or there’s been a clear divide, with ‘manly’ pieces being designed for men – thick rings, pendant necklaces, maybe a diamond stud, largely in dark silvers, brushed metals or brash gold. Compare these to the jewellery ads aimed at women, typically packed with bright colours, sparkle and shine.

However, over the past few years there has been a gradual shift. Instead of severe divisions between ‘male’ and ‘female’ pieces, lines are becoming much more blurred.

A lot of this is due to style icons championing a more genderless approach – think Harry Styles wearing a pearl drop earring to the Met Gala, or Miley Cyrus in strings of dark silver necklaces. And jewellery brands have been listening.

Not only have more specifically unisex brands been popping up – like Martyre, the label set up by Anwar Hadid and fronted by Zayn Malik – but big brands have also been getting in on the trend. Luxury jewellery house Bvlgari launched a new line within its B.Zero1 collection earlier this year – its first official foray into unisex styles.

For Laura Lambert, founder and CEO of jewellery brand Fenton & Co, this shift takes its cue from the world of fashion. “A lot of brands are taking elements of classic tailoring and modernising them for both genders, so it would make sense that jewellery follows a similar pattern,” she says.

The divide between the genders in fashion is slowly breaking down, helped by big brands like Burberry combining their menswear and womenswear shows.

Lambert says “jewellery is a way of having a beautiful and permanent object that signifies meaning and emotion, that could relate to either gender. As society becomes more sophisticated and understanding of the bonds between people, it only makes sense that the objects that signify those bonds follow suit”. While Fenton & Co isn’t specifically genderless, its jewellery is certainly heading that way – starting with a new unisex signet ring launching in May.

For Heart of Bone jewellery designer Emma Abrahams, making unisex pieces wasn’t a conscious choice – it just happened. “I never even thought for a second that it would be split into womens and mens,” she explains. “It just was what it was, and since the beginning our customer base has been 50/50.”

Abrahams sees the rise of genderless jewellery as very much in line with what’s happening in all areas of life. “Partly politics, partly accessibility to social media, partly an overall global mood pushing towards the deeper acceptance of gay marriage, trans and gender fluid youth, anti-bullying messaging, messaging on acceptance and tolerance, and people fighting for their right to freedom of speech and freedom of expression more than ever,” she muses, “I think all these factors and more contribute to a society that has a deeper understanding of embracing gender neutral.”

Like with so many other issues to do with gender – in fashion and society as a whole – unisex jewellery finally seems to be making its way into the mainstream, and looks like it’s here to stay.