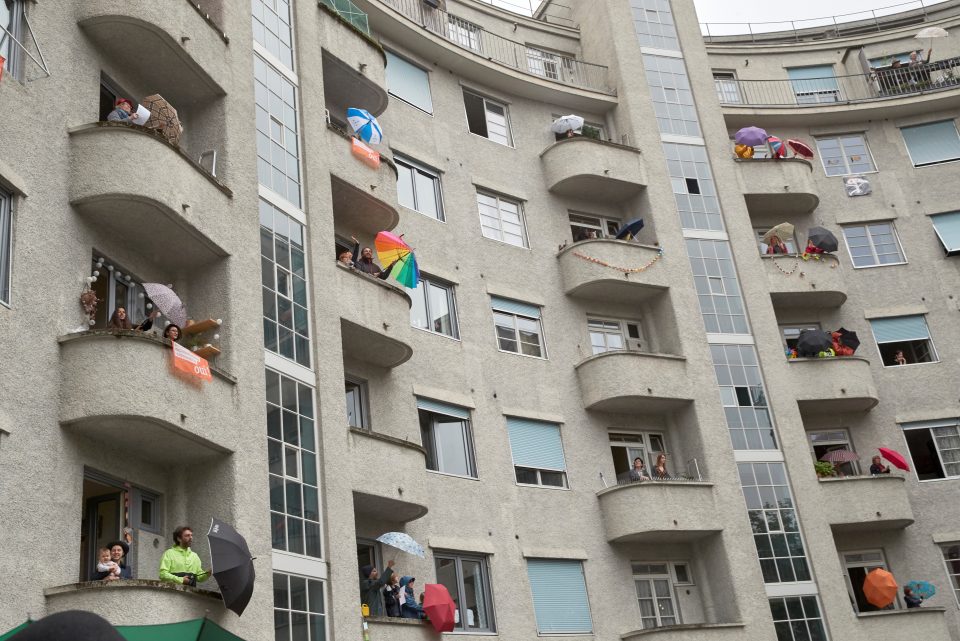 Dressed in a black trench coat and hat, 36-year-old Audrey Lecomte performed ‘Singing in the Rain’ on a drizzly Tuesday evening to the residents of Geneva’s Round House apartment complex, who twirled umbrellas from balconies to the music.

The nightly 6pm ‘choir‘ at the 1920s block, a 6-storey architectural monument built in a semi-circle, has become a way to cheer each other up during Switzerland’s national lockdown to stop the spread of Covid-19, now in its seventh week.

“There is music, it swings, that’s a good thing,” said Daniele Salins, a 75-year-old resident who joined in the dancing. “It feels good, it takes our mind off our problems, otherwise, if you look at the news, it’s very exhausting.”

The tradition started in mid-March when the Swiss lockdown began and residents sing and dance to a handful of songs every night except Sundays, taking turns to choose the music.

Switzerland has reported nearly 30,000 cases of Covid-19 and more than 1,350 deaths, but case loads are easing and Berne has begun to relax measures which were never as strict as in neighboring France or Italy.

The dozens of kids in the building look forward to the evening ‘show’ and passers-by stop and watch with kids and dogs. “The children, who can’t play with each other, they at least get to see each other,” said Tessa, a resident and 39-year-old speech therapist and mother of two young boys.

“There is closure for the day with a feeling of warmth and togetherness.”

One resident danced with a baby in her arms and another family blew bubbles. They also sang happy birthday to a beaming 11-year-old boy on a balloon-adorned balcony.

The choir is not the building’s only initiative under lockdown. They also held a relay-style marathon this month with each resident running laps around the courtyard to cheers as well as balcony quizzes and movie nights.

It is the spirit sought by late architect Maurice Braillard who designed the building, shaped like a Roman theatre, to encourage interaction.

“We went from being residents and neighbours to being a big family,” Lecomte told Reuters. “It has become more and more magical as time has passed.”

Residents say they want to continue the choir after lockdown ends. The tentative end date is May 11 when schools resume.

“We are thinking of keeping it as a ritual every Sunday,” said Marion, a resident and mother. “Otherwise, we are afraid we will miss it when confinement ends.”

General deficit up in fourth quarter of 2019

Coronavirus: Akinci says crossings should reopen after joint consultations when the time comes