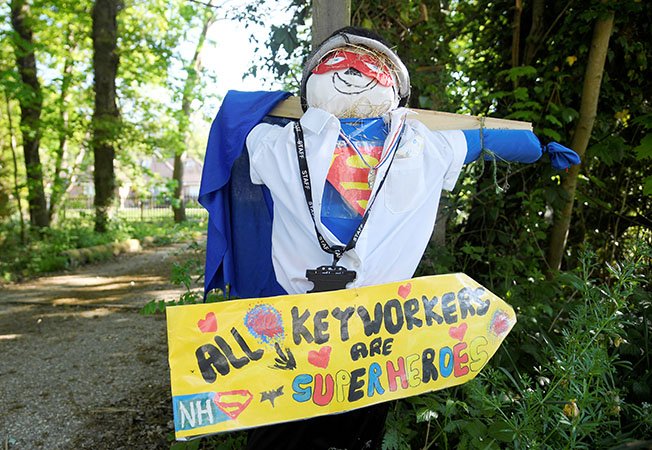 A scarecrow representing key workers lightens the daily lockdown walk in the village of Capel, in southern Britain

The UK should take a slow approach to coming out of lockdown and reopen sectors one-by-one to ensure coronavirus does not begin rapidly transmitting again, experts have said.

For instance, schools could reopen and if infection rates stayed low, then another sector – such as restaurants – could be unlocked, it was suggested.

But if infection rates surged then officials would have to consider locking down sectors again, experts told a webinar for the think tank Chatham House.

This could be different sectors or geographic regions where the risk of transmission was low.

But a gradual process could take months and may see the UK follow the Swedish model.

Sweden has been more liberal in its social restriction measures – rules include having no more than 50 people in a crowd, restaurants are still open but have to have five feet between tables, people can drink socially but they cannot stand up with a beer, they have to sit down and drink it.

Johan Giesecke, professor emeritus of infectious disease epidemiology at the Karolinska Institute Medical University in Stockholm, Sweden, and former state epidemiologist for Sweden, said that other countries could have followed the Swedish model.

Prof Giesecke described Sweden’s approach as a “soft lockdown”, adding that this process “would work in most countries”.

Most of the lockdown restrictions in Europe had “very little scientific background” and were brought on by politicians who wanted to show “strength, decisiveness and action”, he said.

Infectious disease specialist Professor David Heymann, Chatham House Fellow, added: “The problem in many countries is that the lockdown occurred without any thinking about an exit strategy.”

Prof Giesecke added: “I don’t know any single country in Europe that had any idea how they would get out of the lockdown, the exit strategy was never discussed.”

He said to get out of lockdowns, countries must act “very gradually” – potentially over a period of months – unless they wanted a big wave of cases.

“If you stopped everything (social restrictions) in the UK tomorrow, when the restrictions were gone you’d have a huge wave of cases so you have to do it slowly and in steps,” he said.

“You can’t have a mandatory lockdown forever, not in a democratic country.”

Prof Heymann said there may be certain regions of England, or other countries, where they felt they could unlock earlier because transmission rates had been low.

He said he believed that when governments decided to “unlock”, they would follow the Swedish model – including no mass gatherings, and social distancing in places like restaurants – in a gradual way.

“It would make sense to prepare for a phased unlocking which goes to areas where there are less risks … you don’t do everything at once,” he said.

This might be a sector of the UK or geographic region, he added.

Prof Giesecke said: “You need to take one action at a time, and you start with, for example, opening the schools again.

“And then you’ll follow what happens for the spread – will that affect the spread yes or no? If it does, then you close the schools again, it doesn’t, you keep them open.

“And then go on to the next restriction which may be to open restaurants, I don’t know. And you check with this release what happens and so on.”

Meanwhile, Prof Giesecke also talked about the UK’s coronavirus strategy early on in the pandemic.

He said the UK’s initial approach to the pandemic was “going in the right direction, but then the paper from Imperial College happened”.

“It will be interesting to write a book about ‘how a not-very-scientific paper changed the policy of an entire country’.”