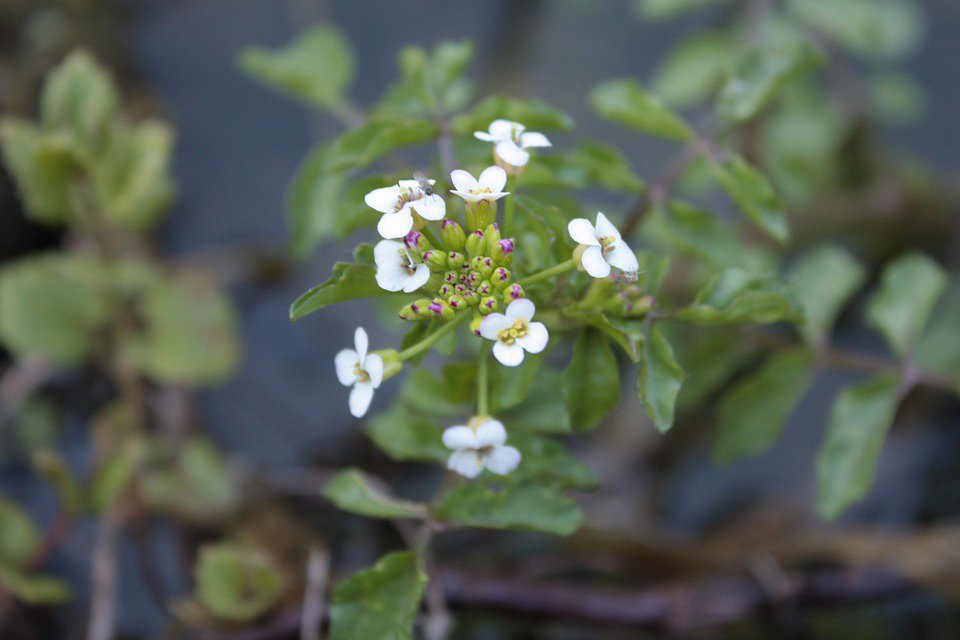 Habitat: A perennial aquatic herb of the Cruciferae family, growing to about 80cm in running water in Europe and South West Asia. The plant has thick, round leaves on soft stems that terminate in racemes of small white flowers. It is a secondary host to the liver fluke parasite. Excessive consumption will cause inflammation of the mucosa of the bladder.

What does it do: The pungent flavour of cress is responsible for its name, which derives from the Latin; nasi tortium – convulsion of the nose.

Hippocrates recommended watercress as an expectorant, and the ancient Persians fed it to their children to ensure healthy growth because of the concentrations of minerals, vitamins and amino acids found in the plant.

Culpeper states ‘bruising of the leaves and stem will provide a juice for the removing and curing of unsightly spots, blemishes and blotches’.

The amount of chemicals packed into such an insignificant plant is remarkable. It contains gluconasturtin, nitriles, nicotinomide, the minerals manganese, iron, copper, phosphorus, iodine, calcium, potassium, sodium, selenium and zinc among others, numerous amino acids, and the vitamins, A, B, C, E and K.

In Ayurvedic and Chinese folk medicine watercress is used to treat tuberculosis and internal tumours. In Europe it is recommended for catarrh, bronchitis and infections of the respiratory system, anaemia, gingivitis, kidney and bladder disorders, chronic rheumatism and metabolic disorders. In Germany it is a treatment for infections of the lower urinary tract. Watercress tea is very popular as a blood cleanser and as a source of nutrients.

Recent research indicates that compounds from watercress may protect smokers from the carcinogens present in tobacco smoke that contribute to the aetiology of lung, mouth and throat cancers. Interestingly, watercress juice will dissolve nicotine.

The herb may be included in salads, as an accompaniment to sea food, or in its most popular form as a soup.

Coronavirus: Ministry of health says who should wear masks